Never seen a Woody Allen film before. You'd think one might have been on while I was in the same room at some point over the last 34 years, but no: never. People don't half talk a lot in them, it turns out. Not that I've anything against that, it's just I'm mainly used to things where people shoot each other in the knees rather than sit around running their mouths the whole time. Meh, maybe it'll catch on.


No, he's pretty good, this Allen chap. Blue Jasmine is a tightly scripted tragedy of manners, if you will, not that you have much choice, with a deftly-chosen supporting cast backing up an astonishingly good performance by Cate Blanchett. Remember her turn as Meredith Logue in The Talented Mr Ripley, bring it forward 50 years and cram it full of Xanax, social humiliation and misplaced priorities, and you're just about where she is as Jasmine. The role is a lay-up for her, in honesty - the pampered housewife forced to slum it with the earthy sister isn't drawing any new comic lines in the sand - but where she takes it is quite extraordinary. 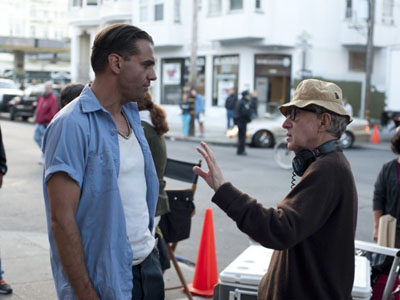 "Please, Mr Cannavale, I didn't mean anything by that crack about your hair. Here, take my lunch money!"


The 'slumming it' we're on about here is in San Francisco, where Jasmine's sister Ginger (Sally Hawkins) lives a simple life with her two kids and whichever man is around. Jasmine, formerly married in Park Avenue luxury to rich businessman Hal (Alec Baldwin), has lost everything after he went to prison for fraud, and now she's living with Ginger while she gets back on her feet. There are obvious comic tropes: Jasmine continues to dress like she's on a Fifth Avenue shopping day while hanging out with Ginger and her mechanic boyfriend Chili (Bobby Cannavale); she resents having to work as a receptionist to make ends meet, and so on. In itself this is fairly standard fish-out-of-water stuff, and you settle in, thinking we're heading for a tidy resolution where she falls for a simple handyman who shows her what real life is despite herself.

Then you realise it's going somewhere else entirely, and that this Allen bloke knows what he's doing. For a start, Jasmine is so deeply vain and unlikeable that you don't particularly want her to end up happy, and Allen recognises this. I called it a tragedy of manners not just because I thought it might make me sound clever, but because you can't call Blue Jasmine a comedy. It has some funny lines, and some laughs in its situations where she's obviously incongruous, but its overall outlook is pretty bleak. 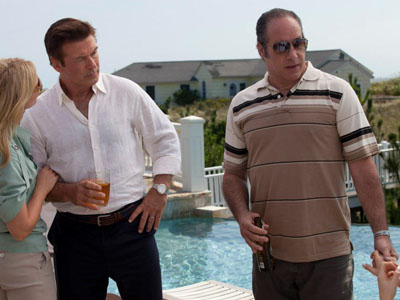 
Cutting back and forth between her San Francisco reality check and her former life of country-club lunches and Hamptons weekends with Hal, we're seeing a woman's elongated nervous breakdown, and Blanchett delivers it with devastating impact. She shivers with anxiety, always on the verge of eruption, washing down pills with Martinis and chattering to herself in the street. So much is going on behind the eyes, but never is there a character back there who seems redeemable. Ginger, so patient in the face of the constant passive barbs from her houseguest, must snap at some point, you think, and we'll see a satisfying takedown of every superficial thing Jasmine holds dear. But Allen never quite gives you what you think is coming.

So on this evidence, maybe the little guy's got some game. Tell a friend. I think I'll give some of his other stuff a go. That one called September's supposed to be pretty good, right?