It's a cartoon about a drunk horse, but I still think it has something interesting to say about contemporary celebrity. I will not let this Media Studies degree go to waste.


Forgive me, for this is nothing whatsoever to do with the review, but I looked for research at Wikipedia's List of fictional horses, which (a) exists, which is brilliant in itself, and (b) clarifies at its outset, wonderfully:

"
"
This is a list of horses and ponies in fictional subjects, excluding hybrid fantasy creatures such as centaurs and unicorns and excluding their cousin donkeys and zebras and cross-breed Mules and Zebroids.
This is a relief, you'll agree. Could've been a bloody free-for-all otherwise. While we're at it, these are my favourite two entries from the talk page:

Sorry. Anyway: BoJack Horseman is Netflix's latest original series (there are now enough that they spring them on us with little fanfare: a show of strength), about a horse (Will Arnett) who was a sitcom star in the 90s, now out of work and drinking the pain away in his Hollywood hills mansion. His deadbeat houseguest is Todd (Aaron Paul) and more or less everyone else is another animal of some sort, except Diane (Alison Brie), a third-wave feminist ghostwriting BoJack's autobiography.

Horses, it has been proven beyond doubt by equine popular cultural theorists, are funny, and when they wear jackets, stand on two legs and drink Scotch for breakfast even more so. It falls to Arnett, who has just about the greatest voice you can imagine, to emphasise this. His is a tone born to relay douchiness and boorish entitlement, and BoJack has all of this. Much like Matt Le Blanc in Episodes, he got used to a life where everything was available to him, and doesn't understand this one in which he has to work to achieve anything new. 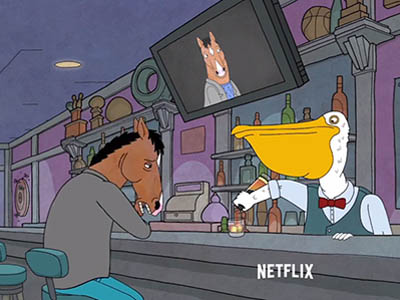 It's interesting how preoccupied we are now with fiction about celebrity; reality TV and Twitter having narrowed the gap between star and civilian so effectively that there's no narrative hurdle to overcome in showing a famous person's life to be mundane or at least beset with human problems. So we get Episodes and we get Curb Your Enthusiasm and we get Entourage, and even big-screen comic book adaptations like the Iron Man and Dark Knight franchises deal with how the superhero must address his own celebrity.

BoJack Horseman's filter on this is a comic one, sure, but it's saying a few things too. He's beset by paparazzi, and cameraphone-wielding teens who have no problem announcing within his earshot that a washed-up sitcom star is in the same bar. He reconnects with Sara Lynn, the former child star of his sitcom, turned Britney-lite teen star and now Lindsay Lohan-style hot mess, addicted to painkillers and dating Andrew Garfield. A childish encounter with a Navy SEAL (an actual seal) in a grocery store leads to a FOX News-style public campaign labelling BoJack unAmerican. This is modern Hollywood, without the luxury of distance stars used to enjoy. If it weren't about a horse, it'd be pretty true to life.

More:  BoJack Horseman  Will Arnett  Aaron Paul  Alison Brie  Amy Sedaris  Paul F Tompkins  Netflix
Follow us on Twitter @The_Shiznit for more fun features, film reviews and occasional commentary on what the best type of crisps are.
We are using Patreon to cover our hosting fees. So please consider chucking a few digital pennies our way by clicking on this link. Thanks!