I'd love to be able to say with complete authority that Brave is a colossal return to form for Pixar, but I can't, because... well, frankly, I didn't much feel like seeing Cars 2. Though I can't comment on the specifics, Pixar's last movie felt so cynically made, so driven by the wrong factors, so unlike them. What I am qualified to comment on, however, is Brave and how it's seemingly the complete antithesis of Cars 2: lovingly crafted for all the right reasons and built from the ground up around story and character, not market share or brand recognition. Brave strives above all else to make an emotional connection, and boy does it connect: a hugely atmospheric fairytale of old, it's Pixar's most mature movie to date.


Brave is the first Pixar movie without a gimmick, for want of a better word – no talking toys, singing fish, maudlin robots or cooking rats. Even The Incredibles and Up, Pixar's only other movies with human lead characters, had flights of fancy to keep them light: super-powers and exotic birds and dogs flying bi-planes. Brave is more grounded, and though it features magical elements, as per any Celtic fairytale you'd care to mention, it's less obviously showy than past efforts. The bonny Scotland of the Pixar render farm is the closest they've come yet to replicating a world that feels of our own – rolling hills and foggy moors so real you can almost reach out and brush the dew off the grass.

This heightened realism extends to the characters, too. Princess Merida is, believe it or not, Pixar's first female protagonist, but Brave doesn't play the gender card: as always, it aims to connect with as wide an audience as possible. A smudge of a nose underneath a shock of Rebekah Brooks hair, Merida is the most rounded Pixar lead yet. A princess by title only, she yearns for a freedom that tradition says she'll never have, and turns on her heel when her mother, Queen Elinor (Emma Thompson), insists she must be married to the son of one of three warrior clans. Out in the forest, however, awaits a bear – the same wild animal who took the leg of her father, King Fergus (Billy Connolly). 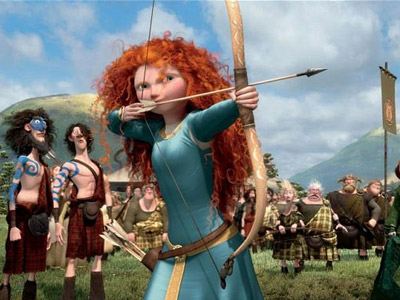 It's how people used to hunt bears before Ted Nugent was invented.


It may not seem all that bold on face value, but Merida is free from the usual clutter of animated crutches that are deemed necessary to prop up animated female leads – at no point in Brave's creative process did the writers cave in and give her a talking horse or a sassy lizard to share her thoughts with. There is a genius second act twist, which makes sublime use of Pixar's anthropomorphic talents, but despite its story of myth and legend, Brave never forgets that it is character that's truly important. Even Queen Elinor – who'd be recast as an evil stepmother in a lesser film – is given her dues: the entire movie revolves around the mutual respect between a mother and her daughter. How rare is that?

Something about Brave feels pleasingly old-fashioned, timeless, like the Disney animations of old. It's a simple story, well told – it just so happens that Brave's animators have significantly more impressive brushes with which to paint than Uncle Walt did. It's a frequently breathtaking visual experience, and though the frame isn't as busy as the likes of WALL-E or Toy Story 3, it's no less vibrant; a muted colour palette of greys, greens, browns and blues is whisked into a multicoloured whirl every time redhead Merida gallops through the scene.

Crucially, Brave feels genuinely authentic: a real product of Scotland, despite being made some 3,000 miles away. Kelly McDonald, a native Scot, does great work as Merida, imbuing her with a warmth and playfulness that original voice artist Reese Witherspoon just wouldn't have been able to provide (you shudder to think of her reading the line "Jings, crivens, help mah boab!"). Connelly and Thompson are both excellent (him a recognisable Scot, her a convincing substitute) while the likes of Robbie Coltrane, Craig Ferguson and Kevin McKidd bring a welcome Scottish burr to proceedings as the duelling warlords. There's not a Christopher Lambert in the bunch. 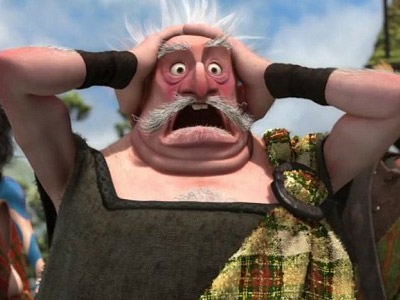 Notice I didn't say anything about Sean Connery lookalikes.


Brave has as much humour as it has heart, and for every predictable gag about kilts and haggises (haggi?), there are wonderfully deft touches; the Fantastia nod in the witch's cottage; her answering machine cauldron ("To speak to a live homunculus..."); the lilting arrow loaded into the dullard boy's bow; the barely audible "Ah can see mah hoose from here!" uttered atop the King's castle. It's heartening to know that even when Pixar are making a relatively serious movie, they still know how to have fun.

Brave has something for everyone: it's touching, funny, sumptuous to look at (with proper 3D and everything) and with real feeling at its core. Forgive this sudden outpouring of sentimentality, but I have a baby on the way, and I'm planning on eventually passing on my passion of films to my child via the medium of Pixar. No one else makes it this easy to illustrate the sheer joy a film can elicit, and in Brave, Pixar have created a film that'll be passed on from generation to generation, to boys and girls alike, for years and years to come. Now that's a 'happily ever after' you can take to the bank.

More:  Brave  Pixar  Kelly Macdonald  Billy Connolly  Emma Thompson
Follow us on Twitter @The_Shiznit for more fun features, film reviews and occasional commentary on what the best type of crisps are.
We are using Patreon to cover our hosting fees. So please consider chucking a few digital pennies our way by clicking on this link. Thanks!