I apologise in advance, because I'm about to do my favourite film of the year a disservice by writing a fairly brief review. All you should know is that it is hands down the funniest, most enjoyable, most heartfelt comedy I've seen for years – not only is it probably the best wedding movie ever made, it's up there with the best comedies of the last ten years. If I must indulge the needless gender war it seems to have ignited, the girls of Bridesmaids have taken the boys of The Hangover to the cleaners. And then shot them.


Bridesmaids isn't a wedding film, not really. It's about the events leading up to a wedding and it culminates in a wedding ceremony, but in a typical wedding romcom – starring, let's say, oh, I don't know, KATE HUDSON – the cloying, unavoidable message that's pushed down your oesophagus come the end is that 'love conquers all'. That's kind of true here, but not in the way you'd expect. There's no groom rushing to the altar or a last minute chase at the airport. In fact, I'm pretty sure the groom doesn't even get any lines. 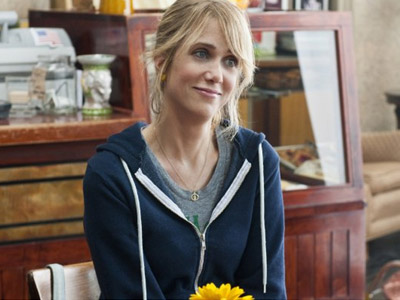 The fact I want to marry Kristen Wiig is neither here nor there.


The central relationship here is between Kristen Wiig's maid of honour Annie and her best friend bride Lillian, played by Maya Rudolph. Theirs is a friendship you believe in, from the moment you first see them, stealing open-air aerobic instruction by secretly exercising behind a tree. The very next scene, they talk men, marriage and sex, and not once do you feel Wiig and Rudolph – who are great friends in real life – are reading from a script. It's a natural, effortless and very, very funny chemistry they have between them – crucial, when one is pretending to be a penis for the other's amusement.

This being a Judd Apatow production, the set-up is milked for maximum laughs – it's still a broad comedy at heart, with more than its fair share of sex gags, puke shots and shit jokes (this being a lady-based production, there's only one, but it's a good 'un). Importantly, none of them really feel shoehorned into the story, and the smaller, lighter moments are just as funny as the 'set-pieces' – Annie attempting to climb over a mechanised gate that then swings open is a simple but utterly wonderful piece of comic timing that brings the house down. Seconds earlier, she's being shagged silly by Jon Hamm. Also hilarious.

This can't not be funny.


It's been over a month since I attended the Bridesmaids screening, and usually after that long, I struggle to remember key scenes and character names. Not with this. I can still remember at least a dozen stand-out laughs – and that's genuine LOLs, not mild smirks or comic snorts. Even the minor characters stand up well, including Chris O'Dowd's love interest – a genuinely affable, realistic, funny, nice guy; the kind of which you just don't see in movies any more. Only a couple of the fringe members of the wedding party get a little short shrifted, which will no doubt be remedied in an extended cut on DVD.

All credit to Kristen Wiig for crafting a pin-sharp, refreshing screenplay, which never forgets to keep character at the forefront of the comedy. Humour comes from moments of extreme awkwardness (the bridesmaid 'battle rap' at the engagement party), social embarrassment ("Did you come from work?" asks butter-wouldn't-melt queen bitch Rose Byrne) and good old-fashioned childishness (the sign for Annie's closed-down bakery, Cake Baby, now reads 'COCK BABY') – you never know where the next laugh is coming from. 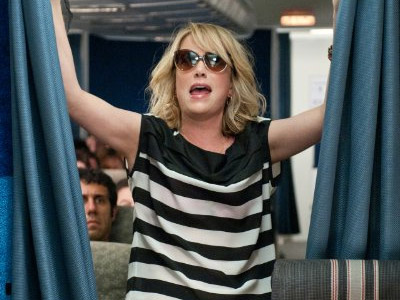 
Conversely, the moments of hugging and learning, when they inevitably arrive, don't feel forced. Some characters go to pretty dark places, so much so, you may feel compelled to shake them from their funk and give them a big hug in case they bring the movie down from its high. There's a full spectrum of emotions on show: how many comedies with a gag involving projectile vomit and diarrhoea can say that?

And yes, I do realise I said I was going to do a brief review, then I wrote over 600 words. That's how much I enjoyed Bridesmaids – I even had fun writing about it. It's my favourite film of the year so far and the funniest US comedy since The 40 Year-Old Virgin. Suck it, Kate Hudson.

More:  Bridesmaids  Kristen Wiig  Maya Rudolph  Paul Feig  Jon Hamm  Chris ODowd
Follow us on Twitter @The_Shiznit for more fun features, film reviews and occasional commentary on what the best type of crisps are.
We are using Patreon to cover our hosting fees. So please consider chucking a few digital pennies our way by clicking on this link. Thanks!