It's always heartening to report that a non-costume, non-street-crime British drama has made it to cinemas at all, let alone that it's any good. Broken, the debut offering from director Rufus Norris, is a rare thing: a film made on these shores that takes the best of British whimsy and lets you see the darkness that can lurk just below its surface, without a bodice or a firearm in sight.


Whimsy might not seem the right term for a story that takes in mental illness, class and violence along its way, but it feels appropriate. The great skill in what Rufus Norris achieves is in his film's balance between everyday British family life, with its harmless jokes and quirks, and the horrible disquiet with which he intersperses it. We see this right from the off, as teenaged Skunk (Eloise Laurence) arrives home to see neighbour Rick (Robert Emms) washing his car, just before he receives a brutal kicking from a shirtless Bob Oswald (Rory Kinnear), next door's father of three hellcat daughters. In a few seconds, Norris rewinds us back and lets us in on the reason for it; the first of a few key points that play with time to emphasise the brutal effect before showing the cause. The effect in this case is to kickstart Rick's descent into mental illness, and Oswald's violent downward spiral. 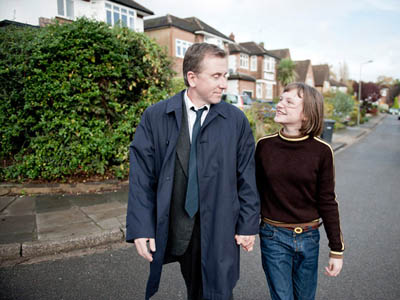 "Everybody be cool, this is a shrubbery!"


Oswald forms one half of a tale of two fathers: we've established earlier that Skunk has type one diabetes, and seen beautifully lit shots of her father Archie (Tim Roth) by her hospital bedside. Both men guard their children in different ways – Oswald flies off the handle whenever his out-of-control daughters are under suspicion; Archie is overprotective – but they're less different than you think. Both were made single fathers through no choice of their own, and by the end their approaches begin to overlap as they're presented with different circumstances. Kinnear is probably not quite the right choice for his role; he's too often played suited well-to-do figures to wholly convince as a string-vested council estate thug, but he conveys frustration very adeptly.

There are maybe five or six inter-cut sub-plots, all quietly doing their thing without making any great pronouncement of narrative intricacy like, say, last year's iLL Manors. Archie begins a relationship with the live-in nanny after she dumps her boyfriend Mike (Cillian Murphy). Mike becomes Skunk's teacher and rescues her from bullying by the Oswald sisters. A pair of voiceless twins pop up every now and then and throw dog shit at people. Much of this seems inconsequential, and there are lots of laughs throughout, but every one brings some ugliness a few minutes later. 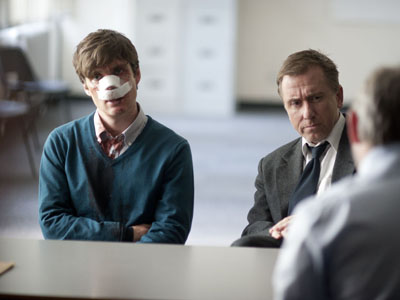 
I tried to describe Broken to a friend last week and realised I'd talked about it for five minutes and barely mentioned the lead character. So it's been here: the curiosity of Skunk is that much of the story goes on around her without much agency on her part. But it'd be wrong to dismiss what Eloise Laurence brings to the role: a childish innocence shot through with an attraction to darkness. As Rick's insanity corrodes his family and has further implications for the street's other residents, she's the only one who can't resist his company, maybe out of fascination or maybe because she's becoming used to the chaos she sees around her.

Where cinema deals with mental illness it's usually in a sanitised way, as in Silver Linings Playbook, or through the over-the-top tropes often used in horror. Broken occupies more of a middle ground, showing its toxic effects on the family and the damage done by the perceptions of the narrow-minded. And as it careers towards its powerful conclusion it throws in one last cut from a violent altercation to a man choosing between skimmed and semi-skimmed milk, reminding you, once more, how the mundane can coexist with the horrific.

More:  Broken  Eloise Laurence  Tim Roth  Cillian Murphy  Rory Kinnear  Rufus Norris
Follow us on Twitter @The_Shiznit for more fun features, film reviews and occasional commentary on what the best type of crisps are.
We are using Patreon to cover our hosting fees. So please consider chucking a few digital pennies our way by clicking on this link. Thanks!