Just like Stan Lee releases those How To Draw Your Favourite Superhero books, complete with crudely sketched circles and squares that somehow become awesome comic-book artwork in just four 'easy' steps, it is becoming increasingly clear that Marvel is working to a very strictly defined template with its movies. Almost like they've all been storyboarded for years in advance. (*glances at comic collection*) OH.


And so it is with this film. We start with an action set-piece rinsed with casual jokes to act as a fun reintroduction to the character. Then things slow waaay down for the majority of the film while it is front-loaded with jargon-levels of exposition, all so that we can have the huge 40-minute long climactic pay-off at the end. Again. 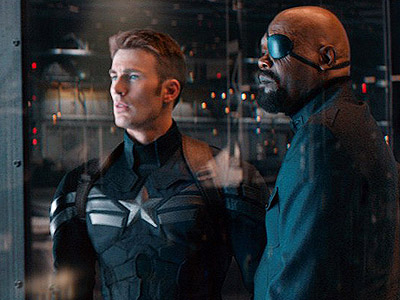 "Wait - which one of us is supposed to say something funny here?"


The thing is, for the most part, this is a formula that works. Captain America: The Winter Soldier is packed with short bursts of inventive action, there are neat gags and cool universe-building moments for the fans and a weighty standalone story at its core. But it is also exactly what we expect from Marvel now and, as such, this is the first film in its catalogue that doesn't feel particularly fresh or exciting.

To be fair, it does accomplish an astonishing balancing act of all of these things, but it is to the extent that nothing particularly stands out. 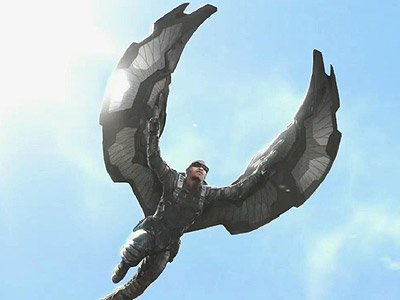 
Perhaps the biggest problem lies with the character himself? And not because of the usual accusation that goody-two-shoes Captain America is frankly quite a boring lead - Chris Evans still lends the role deft touches of humour alongside the credibility needed. No, the problem is, once you take him out of his 40s setting, any Captain America film kind of loses its USP.

You need a plot that still feels grounded enough to be a Captain America story, and yet it feels like he is in direct competition to superheroes that have more going for them - the charisma of Tony Stark, the galactic monster threats of Thor, the combined awesomeness of a superhero team-up. Captain America himself might not be boring, but he only really lends himself to less-exciting storylines. At least for the movies (he adds, before the internet punches him in the face).

And so we are presented with this: a paranoia-soaked political thriller, which fits the character very well. Thanks to some creative plotting, we get some strong links back to Cap's wartime days - which help to bridge over the disconnect between this and his first outing - and the result is at times a wonderful mix of straight-faced conspiracy drama and pulpy comic-book entertainment. Even when the film delves into technical military talk and themes of global crisis, which is sadly frequent, the film never forgets to lace the story with fun character moments ripped straight from the pages of its source. 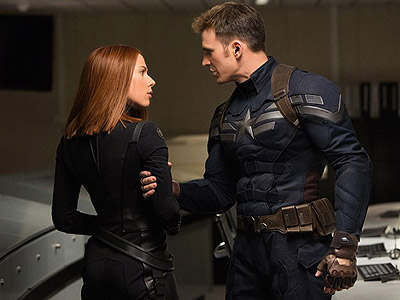 
Yet, the main issue remains. We are at a stage in Marvel's movie growth where we are wise to proceedings and some laziness is starting to become apparent. Nowhere is this more apparent than with the comedy in the film. All too frequently it is called upon for Scarlett Johansson's Black Widow or Anthony Mackie's newbie The Falcon to follow up intensely dangerous stunts with glib remarks; not cleverly constructed jokes, but mock outrage or sarcasm. It's a quick, easy way of saying "look, we're giving you action AND comedy", but it's not particularly clever or interesting.

Far better are the quieter character moments, such as a quick glimpse at Steve Rogers' notebook list of what he needs to catch up on in this modern age. Even better are the rare moments where the pomposity of the comic-book world is punctured by a clash with a real-life situation. Iron Man 3 did this well, with its distinctly average henchmen and over-eager cameraman, and here a brief scene in which Captain America and Black Widow are interrupted by an Apple Genius offering his services is one of the most memorable moments. 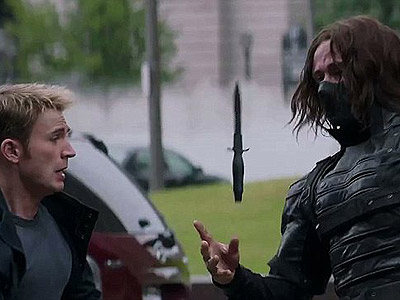 Marvel: Teaching children to play with knives since 2014.


Otherwise though, it is the usual mix of Marvel movie-making. We get some neat references to other unseen characters to keep the fans frothing ("They mentioned HIM? What does that mean?!!!"), Mackie's Falcon feels like a generally nice but ultimately unnecessary addition to the universe, and Samuel L Jackson gets to flex his gun-toting muscles to add to the sense that there's a degree of character expansion here.

But never before has it felt so much like the superhero genre is in danger of imploding. With the weight of so much larger-scale ambition threatening to snap even Cap's supposedly impervious shield, it's difficult to see how Marvel can keep up the same level of momentum long term. Frankly, there's no clearer sign that things are beginning to turn stale than when even the requisite Stan Lee cameo fails to raise a smile.

More:  Captain America The Winter Soldier  Captain America  Anthony Russo  Joe Russo  Chris Evans  Scarlett Johansson  Frank Grillo
Follow us on Twitter @The_Shiznit for more fun features, film reviews and occasional commentary on what the best type of crisps are.
We are using Patreon to cover our hosting fees. So please consider chucking a few digital pennies our way by clicking on this link. Thanks!