You know the score – kooky characters meet low-brow humour in a loosely-strung together plot. There’s bound to be some physical pain played for laughs, some hilarious cringeworthy moments for the main character and, of course, improvised dialogue (I blame Will Ferrell), The question is: is it funny? In this instance, yeah, sure. Pretty much.

Cashing in on his Hangover and Office fame, Ed Helms sticks to type by playing another naïve but cautious eager-beaver, Tim Lippe, who is forced to leave his sheltered life and experience the sins and corruption of the real world as he represents his small-town insurance company in an annual convention. Along the way he gets led astray by charmless booze-hound Dean Ziegler (Reilly), tries to stick by insurance veteran Ronald (Whitlock Jr.), becomes smitten with sassy flirt Joan (Heche) and befriends cheery hooker Bree (Shawkat). Inevitably, the more Lippe indulges in reckless behaviour, the less likely it seems that his company will hang on to the coveted 2-Diamond award handed out at the convention every year.

From the offset, this seems like a comedy vehicle for Helms who, from his previous roles, you would imagine is best left on the sidelines, playing ‘doofus’ to the leading straight man. In actual fact, Helms’ unjaded enthusiasm and childlike innocence adds charm throughout the film, even as his character’s moral compass begins to swing wildly off course. 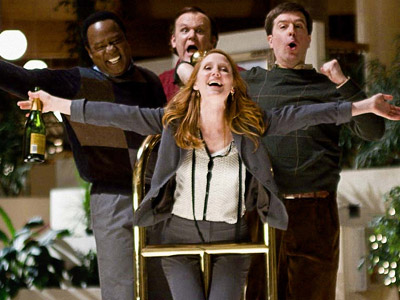 All aboard the comedy trolley!

It is also strictly not a one-man show, with an ensemble of comedy characters all pitching in with one-liners and general goofiness. While Sigourney Weaver’s mumsy cougar, Stephen Root’s pressure-cooker boss and Kurtwood Smith’s righteous convention head are all just bit players in the grand scheme of the film, they help to make up a wonderfully diverse cast of rich characters who all round-out this pleasant, if not utterly hilarious, comedy.

Reilly steals the show as the party boy Ziegler, behaving like a drunken loon with only half his marbles for most of the film, making for a terrible influence for Lippe while clearly maintaining only good intentions. While our nervous protagonist consistently finds himself partaking in more and more debauched and troublesome scenes, Ziegler is always on hand to spur him on/get his back/provide a crass comment as and when he is needed. 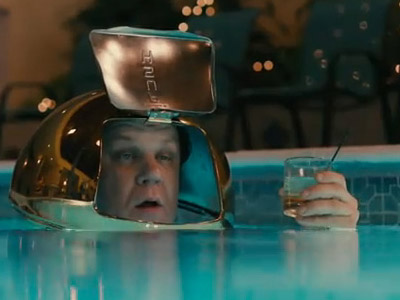 While the film provides more than a few laugh-out-loud moments, the guffaws don’t exactly flow thick and fast - it feels like there is an outrageous and raucous comedy just bubbling underneath the surface that never quite gets a chance to make itself known. This resulting restraint is perhaps a symptom of not knowing whether you should be rooting for Lippe during his inadvertent exercises in substance and moral abuse. Taking drugs? This way leads to comedy, but we already know that it will also lead to trouble for Lippe and we do want him to succeed at the convention, don’t we?

Overall, though, the laughs more than make up for the confused message and, while this isn’t destined to be remembered as a great standout comedy worthy of rivalling Helms’ other film about over-indulgence, it is still guaranteed to provide a few giggles and knee-slaps.

More:  Cedar Rapids  Ed Helms  John C Reilly
Follow us on Twitter @The_Shiznit for more fun features, film reviews and occasional commentary on what the best type of crisps are.
We are using Patreon to cover our hosting fees. So please consider chucking a few digital pennies our way by clicking on this link. Thanks!