Epic doesn’t quite cover it: Six stories spliced together covering six different genres and time-periods ranging from the 19th century to a far, distant future, all featuring the same handful of actors playing a host of different characters and each linked together by themes of fate, causality and consequence. Plus, there’s a whole range of remarkable prosthetics on display, meaning that you could just end up spending the whole near-three-hour running time playing Guess The Actor Under The Rubber Nose.


But that's not to take away from the fact that this film is an astounding achievement. It is no exaggeration to say that it redefines the term 'epic' as applied to cinema; forget your Lord Of The Rings and your Avatars, the only movies that come close to a comparison are those like The Fountain and The Tree Of Life. But far from being a pet project of pretentious auteurism, Cloud Atlas is a much more accessible and approachable exploration of life, the universe and everything. It is, without a doubt, filmmaking at its boldest and bravest.

Right from the start, this film grabs your attention and demands that you keep up as we are introduced to each of the plots in quick succession. Jim Sturgess is the 19th century ship passenger in a gothic tale about the pitfalls of slavery, Ben Whishaw is the musical prodigy in a psychological drama writing letters to his gay lover, Halle Berry's journalist pursues a story in a 70s conspiracy thriller, Jim Broadbent is imprisoned in a retirement home in a present-day brit-com, Doona Bae is a genetically engineered waitress in a futuristic sci-fi adventure and Tom Hanks plays a humble villager in a post-apocalyptic world of faith and savagery. 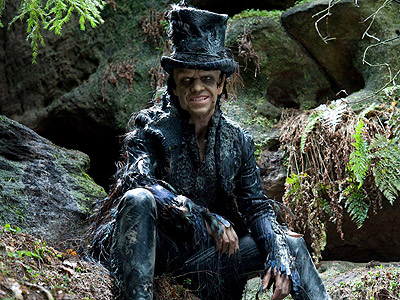 I'm not even going to tell you which story this guy appears in.

The film's biggest flaw is that the stories aren't quite connected enough to make any kind of point. Sure, a similar shooting star birthmark appears on separate characters, and the actions of a preceding period is occasionally referred to in the next one, but on the whole these could actually just be six episodes forced together into one film, each of which are of no great individual merit.

And yet they aren't thrown together haphazardly. An expert hand in the editing suite means that these stories all hit the same beats, the same peaks and troughs, at the same time - which, considering the stylistic differences between the plots, is no mean feat. While the jumps between stories can sometimes be jolting, the film never stops being utterly engrossing as one whole arc.

Between starring in their own stories and co-starring in each other's (along with frequent supporting actors Hugh Grant, Hugo Weaving and James D'Arcy), the range of acting on show is phenomenal. Each star plays a range of characters - young and old, heroic and villainous - that sit together so comfortably that every one of the actors can count this one film as a whole showcase for their formidable talents. 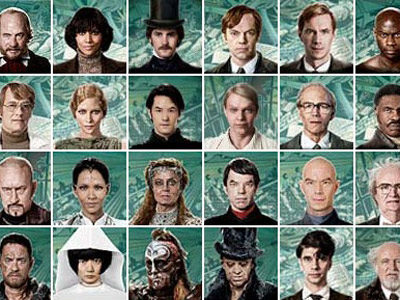 Some of these people are the same...

None moreso than Hanks, who gets the choice picks of the cast, acting his heart out in weighty dramatic roles alongside gurning caricatures with funny accents. If the Academy could ever wrap their head around how to categorise his work in this film, he'd get a nomination for sure.

All of this is greatly helped by the remarkable make-up effects. Between the ageing prosthetics and the make-up used to make everybody look pan-Asian for the sci-fi adventure plot, Cloud Atlas boasts by far the best effects in this department ever seen in a film. It's unbelievable to think that it was only last year when those nightmarish masks appeared in 'serious drama' J Edgar considering that this film contains effects so realistic, it will take you a few minutes to recognise the actor beneath. Granted, there is still a hint of a practical uncanny valley on occasion, but in terms of filmmaking, this stands as a landmark for the make-up department. 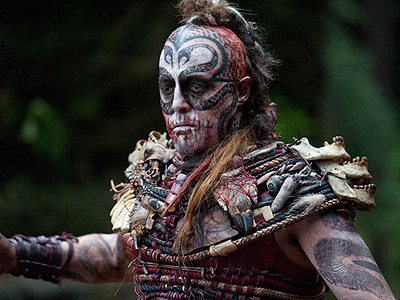 Also, THIS IS HUGH GRANT

It is just one of a whole host of accomplishments for the film, both in terms of story-telling and visual effects. In its attempt to deconstruct the meaning of life, the film manages to deconstruct the nature of cinema itself, rewriting the laws of filmmaking to produce something utterly unique.

Any flaws found here, including tonal clashes and a slightly saggy final third, are no doubt a result of the directors staying religiously faithful to the source material. Overall though, it is a hugely ambitious and impressive undertaking, the mere attempt of which should be applauded, let alone the lengths at which the Wachowskis et Tykwer actually achieve this vision.

Overall, it's just a shame that no real answers are given here. A film of this scale and scope feels like it should reveal the very key to life as we know it but, ultimately, it feels like there's no real point to it all. Unless that is the point...? (*pretentious face*)

More:  Cloud Atlas  Andy Wachowski  Lana Wachowski  Tom Hanks
Follow us on Twitter @The_Shiznit for more fun features, film reviews and occasional commentary on what the best type of crisps are.
We are using Patreon to cover our hosting fees. So please consider chucking a few digital pennies our way by clicking on this link. Thanks!