Sounds terrible, doesn’t it? A mockney caper that simultaneously tries to jump on the already-slowing zombie bandwagon and capitalise on the superdumb ‘versus’ titles. It’s high concept, low denominator and, as a result, the film should be a straight-to-DVD release destined to languish on some supermarket shelf for one week only. Well, prepare to be SHOCKED TO YOUR VERY CORE. Or just prepare to be mildly surprised: It’s actually pretty good.


It’s an obvious, unimaginative – albeit fitting – comparison, but ‘Shaun Of The Dead meets Snatch’ is a good basis to give you an idea of what to expect from this film. Granted, by that very claim, the film already fails to be as original as either of those two films mentioned, and that is probably the film’s biggest downfall. It’s a zom-com mixed with novice gangster antics and “Cor blimey, guv” dialogue, but with gleefully silly gags, over-the-top performances and a neverending stream of zombie killshots, there’s just so much fun to be had. 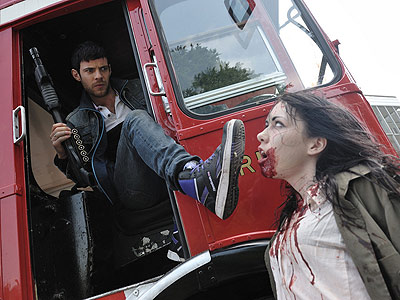 
With all the action centred around the flimsy premise that a small gang of first-time robbers decide to steal enough money from a bank to stop their grandad’s retirement home from closing down, the film very quickly descends into lots of wideboy-geezering and gore-filled brain-splattering. It becomes a very simple story of survival and rescue, but between some screwy characters, prickly banter and comedy zombie-bashing, the hearty laughs come as steadily as the undead invasion itself.

And while laughs are wrung from every character, from the leading brothers’ fat loser best mate to their crazy, trigger-happy accomplice, it’s Alan Ford who gets all the best moments because he is basically playing Brick Top in Snatch again. It doesn’t sound like a compliment to the film, but insert Brick Top in any movie and you have yourself some brilliant, watchable AND quotable scenes. Seething, gurning and swearing his way through a zombie onslaught, Ford gives the film just the right amount of edge where most of the other characters could just as well be starring in a pre-watershed sitcom. 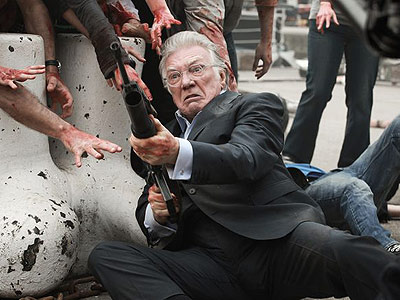 "You stop me again whilst I'm walking, and I'll cut your fucking Jacobs off."


That’s not to say that he completely carries the film, however. Harry Treadaway, Rasmus Hardiker and Michelle Ryan do well to anchor the story as the three main leads even if they are – soap acting aside – relative unknowns. But, for knowledgeable Brits, there’s also the joy of spotting the famous faces that make up the elderly residents of the retirement home. And just as you’re getting your head round Richard Briers and Tinker from Lovejoy being in a guts-spilling comedy-horror film, you have moments like Honor Blackman saying “I will kill you stone fucking dead” to really ram the bizarreness home.

Overall, it’s a steady stream of stupid gags, head-shot kills and several too-good-to-ruin-here highlights (such as a brilliant chase-scene), all of which elevate the film far above what anyone could reasonably expect from such a low-IQ-grabbing title. Don’t get me wrong – it’s still not particularly big OR clever, but it’s consistently fun to watch and... well, did you read that bit about Honor Blackman saying ‘fuck’? Worth the price of a ticket just for that.

More:  Cockneys Vs Zombies  Matthias Hoene  Harry Treadaway  Rasmus Hardiker  Michelle Ryan  Alan Ford  Jack Doolan  Zombies
Follow us on Twitter @The_Shiznit for more fun features, film reviews and occasional commentary on what the best type of crisps are.
We are using Patreon to cover our hosting fees. So please consider chucking a few digital pennies our way by clicking on this link. Thanks!