Ever play that game where you begin with a sentence, then go round the circle and everyone gets a turn to write the next sentence, and you end up with a story? Not since you were nine, you say? OK, bear with me. Imagine that everyone in the first half of the circle was a black-hearted fan of moody, intense home invasion thrillers. And everyone in the second half was Quentin Tarantino at his most excitably goofy. Click to read the rest if you like, but you're pretty much there.


I don't know what Nick Damici and Jim Mickle's screenwriting process is, but from the evidence of Cold In July I imagine it much like how Elton John and Bernie Taupin go about writing songs. Bernie writes the lyrics, faxes them to Elton, Elton sets them to music and then spends the rest of the day buying tracksuits and expensive floral displays for the dining room. A 50/50 split; one guy starts it off, the other finishes it, neither interfering in the other's bit.

Writing a film in the same way seems an unlikely procedure, but it's hard to imagine that any part of Cold In July's first half was written by the same person who wrote its second. It's as if they were working in shifts. 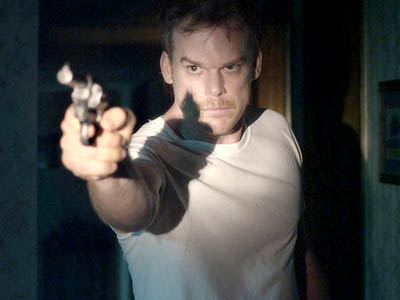 Not so easy when the guy's not strapped down with cellophane, eh?


Now, both of these halves are perfectly good; it's just that together they make for a bizarre tonal shift that derails the film and ensures it can never get back on track. We begin with a mulleted, moustachioed Richard Dane (Michael C Hall, in his first post-Dexter role), waking to find a burglar in his family home, creeping out to the living room and shooting him dead. Shaken, he's disturbed to find himself a local hero for it, and the intruder's father Ben Russell (Sam Shepard) showing up making veiled threats against his family.

This is great. Hall is, as ever, at his best when allowing emotion to play out slowly across his face, making the most of Dane's loss of control, having spent seven years as a character who calls most of the shots. Damici's Ray Price is a convincingly shifty cop, and Shepard brings his best Max Cady. Director Mickle shows a flair for suspense. The Cady comparison isn't the only parallel with Cape Fear here: the close-up focus made on the broken locks, doors and windows of the Dane household reminds you of how Scorsese and his editor Thelma Schoonmaker's idea of the violated sanctity of the family home built up into dread.

There are themes of threatened masculinity here that Mickle felt couldn't have worked in a modern upgrade, hence the adherence to the book's 1980s setting. Interesting, the idea of Reagan-era Texas as a time when men were men and the family unit sacred, as against the present day, when Dane's moustache would've been ironic and his culturally feminised self less of a totem to be claimed by a hostile force. (He is a picture-framer, which feels like an honest no-nonsense trade here, but would've seemed like arty Williamsburg bullshit placed in 2014.) Moreover, there is in the first half a recognisable, uncomplicated motivation for Dane to act. His family's under threat. 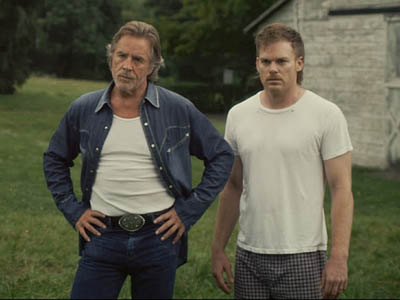 
All of this changes fundamentally the second Jim Bob (Don Johnson) shows up. Once it becomes clear that the police are hiding something, up he steps to help Dane out. But he's been bussed in from a different movie altogether, full of Tarantinoesque quips of the "All right ramblers, let's get rambling" kind. It's not just that he's an overtly comic character; it's that he turns everything around him into a comedy, of which there was precisely none for the first hour. The landscape changed, Dane's mullet, once a symbol of his down-home everyman status, now looks like goofy Farrelly brothers costumery, and Russell is suddenly a benign, cranky old bastard who loses his rag trying to work a VCR. A character is kicked in the balls and it gets a big laugh.

Building towards the finale, which is in itself very tensely staged, there's a creditable effort to return to the darkness of the first two acts, but there's no way back. Dane no longer has any real stake in anything and no reason to act as he does; even as a slow-motion scene towards the end seems to signify a coming-of-age moment, you're wondering why it's so significant for a guy who could've simply chosen to go home and get on with his life. A large plot point goes unresolved, too.

There's some joy, no question, in the surprise of a film taking a different path to the one you expected, and Cold In July's constituent parts are great in isolation. It confirms Michael C Hall as an actor more than able to make you forget seven years of TV familiarity, too. But it doesn't pull off its tonal switch with anything approaching grace, and can't claw back what it built up before it.

More:  Cold In July  Jim Mickle  Michael C Hall  Don Johnson  Sam Shepard  Vinessa Shaw  Nick Damici  Wyatt Russell
Follow us on Twitter @The_Shiznit for more fun features, film reviews and occasional commentary on what the best type of crisps are.
We are using Patreon to cover our hosting fees. So please consider chucking a few digital pennies our way by clicking on this link. Thanks!