You'll have noticed that we don't do DVD Weekly any more. It's difficult - arguably futile - to maintain a weekly feature based on DVDs you haven't seen, especially when most of them are reissues of Boon. So yeah, we probably just won't bother covering DVDs from now OH WAIT HERE'S A REALLY GOOD ONE


Here's another thing that's pretty difficult: review a whole 24-episode season of a sitcom. Mainly because there's no particular overall story thread to judge, but particularly when it's the second season, and your overriding opinion is 'just as awesome as the first season'.

So maybe I'll just focus on two episodes. If you haven't seen Community, it might give you a better idea of what it's about than if I just lazily repeated what Matt said in his season one review. Plus I'll have to do less, so everyone's a winner.
Episode 4: 'Basic Rocket Science'

In a typical setup, Greendale Community College's Dean Pelton gets hold of a spacecraft simulator sponsored by KFC ("the Kentucky Fried Chicken 11 Secret Herbs and Space Experience") in order to become the first local college to simulate space travel. The gang ends up trapped in it, getting towed and having to complete the simulation to get back in time for the launch event. 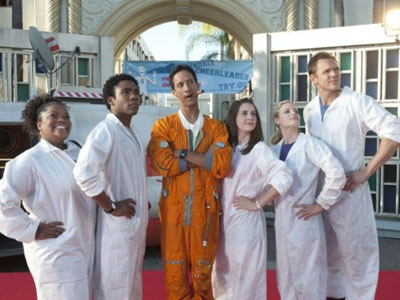 Highlighting what Community does better than any other show - pastiche - what follows is a spoof of Apollo 13 as well observed as you could possibly want. Abed didn't get trapped with the others, and he memorised the workings of the simulator from the internet, so he takes the Gary Sinise role, talking the crew through the simulation while surrounded by students now acting like NASA ground control.
Episode 14: 'Advanced Dungeons & Dragons'

In the best bottle episodes, like Friends' The One Where No One's Ready, you won't even notice that the whole thing took place in one room. That's because the writing's strong and the characters' roles are well defined enough to carry it. Both apply to this one, in which the gang spend almost all of it sitting round a table playing Dungeons & Dragons.

Given that it often seems to teeter on the brink of cancellation through disappointing ratings, Community's confident enough in its audience to do stuff like this. They're doing nothing but talking through their role-playing, and you're familiar enough with how each of them responds to situations that it works, it's funny, and it's even pretty dramatic.
So look: Community is great. It's clever, it's self-knowing, and it mocks and plays with standard sitcom tropes while at the same time being a sitcom with a lot of standard tropes. I gave up wondering whether this element of it was too self-indulgent after about six episodes, and decided it was just very, very funny.

It remains to be seen whether it can keep up its quality into its fourth season - beginning next month in the US - after creator Dan Harmon was shown the door, but hey, it's not like we'll find out over here for a while anyway.

Well, I say that, but as a side note, the release of this and all four seasons of Breaking Bad suggests a new willingness to release critically acclaimed US shows on DVD over here to a UK audience that hasn't had much of a chance to see them on TV. Say what you like about file-sharing, but that audience wouldn't be there without it. That's downloading, supposedly the death knell for DVD sales, actually creating a DVD market that didn't exist. And anyway, some things just deserve to be bought.