It's quite rare for me to embark on a televisual adventure without at least several months of prep: five-star reviews, extensive marketing campaigns, assurances that the hours of my life I'll inevitably lose to this programme will totally be worth it. But sometimes I like to be surprised. So, with no other recommendation than the accolade "the best show with the worst title" (copyright some rando on Twitter), I started watching Crazy Ex-Girlfriend on Netflix last week. 18 glorious episodes later, I am here to give you your five-star review, your marketing campaign and your assurance that the hours of your life you'll lose to this programme will totally be worth it. Fittingly for a show about obsessive behaviour in relationships, I am late-night-phone-calls, million-text-Monday, snot-streaming-down-face-outside-bedroom-window OBSESSED with this show.


That Twitter rando was right, though - that title: eeesh. The first thing you need to know about Crazy Ex-Girlfriend is that there's no assumed "My" in that title; this is not a show told from a male point of view. The lead character is Rebecca Bunch, played by Rachel Bloom (who, if there is any justice, will be absolutely all up in yo' premium Hollywood comedies in a year), who lives an unfulfilling yet successful life as a lawyer in New York when she decides to move to California after being influenced by two things: the sudden reappearance of her Cali-bound ex-boyfriend Josh (Vincent Rodriguez III), and a pretentious butter ad. Crazy? Maybe. But the entire premise of the show is Rebecca wrangling with that question herself. The show's insanely catchy theme tune even sees her objecting to its own lyrics. ("That's a sexist term!")

Furthermore, Crazy Ex-Girlfriend is not half as frivolous as you might expect. With a 40-minute episode runtime and an order of 18 episodes, it has time to explore some pretty deep themes that subvert and go far beyond the usual relationship comedy tropes. Rebecca, though smiley and peppy and cuddly chipmunk adorable, is a textbook self-destructive, self-medicating self-loather. Josh, the object of her affection, is absolutely deserving of it: easy though it'd be to make him Rebecca's unsympathetic foil, there is no snobbery or eye-rolling at her antics. Greg (Santino Fontana aka Hans from Frozen), the third player in the broadly drawn love triangle, is more than just Obvious Guy She's Supposed To Be With; he's a complex character with problems all of his own. Even the supportive best friend Paula (Broadway star Donna Lynne Champlin), the self-styled Judy Greer substitute, is revealed to be a chronic meddler. 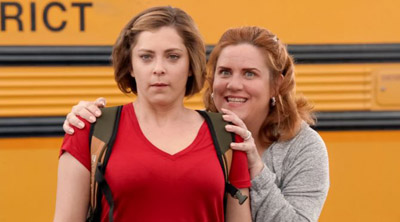 
All this sounds like a downer, right? Wrong! Because, as I found out to my surprise, Crazy Ex-Girlfriend is... (*locks doors*) a musical! Escape is impossible! Don't despair! Each episode has two musical numbers, each and every one an ear worm like you've never known. I'm talking Flight Of The Conchords good. I'm talking hunt down the soundtrack on Spotify good. I'm talking accidentally singing lyrics out loud during your working day good.

Even after the initial listen where you enjoy the jokes - for example, Sexy Getting Ready Song, all about the Grand Guignol routine of a woman preparing for a night out, contains lines about pussy waxing and ass blood and ends with the appalled guest rapper stopping mid-flow to announce he has to "go apologise to some bitches" - you'll return to the songs time and time again to enjoy the tunes.

The music is expertly written, courtesy of music producer Adam Schlesinger, star Rachel Bloom and co-creator Aline Brosh McKenna of Devil Wears Prada fame, all channelling influences from Alan Menken to Stephen Sondheim to Neil Diamond. The key is variety: in the first five episodes alone, you'll enjoy a Katy Perry-esque pop romp about the deceptive nature of female friendships ("I want to lock you in a basement with soundproof walls / and take over your identity"), a country song about how awkward it is to express the love between father and daughter ("I love my daughter / but not in a creepy way") and a Busby Berkeley-lite number singing the praises of West Covina, the underwhelming California town where Rebecca pursues her dreams. ("Only two hours from the beach!") The only thing all of the songs have in common is that they are infuriatingly catchy and demand multiple listens.

I mean, listen to this bastard. It's the new 'I Love Horses'.

I can see how the above descriptions could turn people off: I can't say I'd be all that into a show about damaged individuals singing about their problems. But Crazy Ex-Girlfriend is more than the sum of its parts: it's a joyous concoction of storytelling and sing-along-ing that coalesces into something altogether more complex - it's happy, sad and frequently moving in its fragility and sincerity.

Short of breaking into a showtune to explain my love for Crazy Ex-Girlfriend, I'm going to have to resort to what I know works - you're best off going with the original recommendation: "the best show with the worst title". Let the obsession begin.

More:  Crazy Ex-Girlfriend  Rachel Bloom  Netflix
Follow us on Twitter @The_Shiznit for more fun features, film reviews and occasional commentary on what the best type of crisps are.
We are using Patreon to cover our hosting fees. So please consider chucking a few digital pennies our way by clicking on this link. Thanks!