I am an impressionable idiot. Take me to a martial arts movie, I'll come out Kung Fu fighting. Take me to a spy thriller, I'll be eyeing everyone with suspicion in the car park. You don't want to know what I'll do after I see Nymphomaniac. Naturally then, Nick Frost's comedy Cuban Fury - a movie set in and around the world of salsa dancing and rumba rhythms - had me swaying my hips and sashaying down the Jubilee Line all the way home, where I suggested to my wife we take dancing lessons. Me! Someone whose one and only dance move was nicknamed 'The Ali Shuffle'! Cuban Fury may not have the long shelf life of Frost's Cornetto movies, but during that all-too-brief post-movie glow, it serves as a wonderful example of feelgood comedy done right.


This being Nick Frost's first solo outing, Cuban Fury is a relatively uncomplicated comedy - in dancing terms, it is the equivalent of a nice, slow two-step. The plot is postage stamp-sized: oversized office worker Bruce (Nick Frost) rekindles his childhood love of salsa dancing to win the heart of new boss Julia (Rashida Jones) and get one over his love rival Drew (Chris O'Dowd). If that's too taxing for you, let me boil it down further: it's about a fat guy dancing. As comedic concepts go it's hardly sky high, but you'll forgive Frost for venturing out on his own wearing Forrest Gump-esque leg braces. 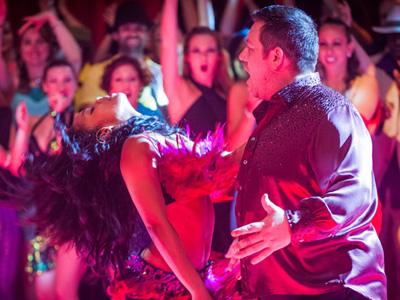 It's the funniest movie about dancing since that bit in that Ben Stiller film.


What Cuban Fury does exceedingly well is flesh out its bare bones narrative with a number of funny supporting characters who make the most of their screen time. O'Dowd is magnificently sleazy and all too recognisable as office pest Drew; Olivia Colman gives the role of Bruce's sister and sounding board Sam more character than she probably deserves; Kayvan Novak takes the spoils as a camp, Fanta-quaffing dance enthusiast called Bejan who salsas his way into Bruce's inner sanctum (he also gets the best line, yelled at a gaggle of middle-aged Zumba dancers: "GO BACK TO THE LEISURE CENTRE, BITCHES!").

Frost, though, is front and center and more than proves his leading man credentials. His dance moves are impressive, but more noteworthy is his screen presence: he knows how to command a scene and as you probably already know, his comic timing is second to none. I could honestly stare at Nick Frost's face for hours: he is literally a human teddybear. In one scene he shares his fondness for his line of work, beaming "I love lathes!" and his little smiling face looks like a fucking panda or something, he's so huggable. Only a completely unnecessary and predictable cameo from you-know-who takes the wind out of his sails.

While the comedy is not exactly sophisticated and the plot sticks closely to the underdog template, Cuban Fury does have a few aces up its satin sleeves in the form of its dance sequences. The aggressive dance-off between Frost and O'Dowd is an expertly choreographed showstopper, packed full of gags that rise above and beyond the concept of the scene (two men are dancing!) while still forwarding the story. 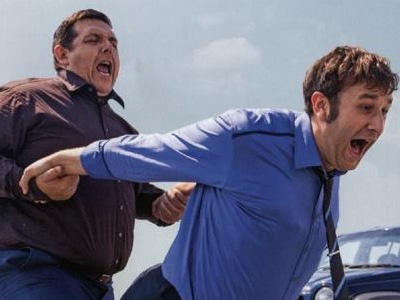 
The final showdown, though lacking true dramatic impetus, won't fail to have your hips grinding into your cinema seat. Salsa music is infectious and the sheer joy that radiates from Cuban Fury in full swing is proof. Oh, and my wife's reaction? "Fuck off! I suggested dance lessons six months ago." (I was busy learning how to sail, having just seen All Is Lost).

More:  Cuban Fury  Nick Frost  Rashida Jones  Chris ODowd  Music  Dancing  Fanta
Follow us on Twitter @The_Shiznit for more fun features, film reviews and occasional commentary on what the best type of crisps are.
We are using Patreon to cover our hosting fees. So please consider chucking a few digital pennies our way by clicking on this link. Thanks!