Hello, I am a man and I am rich and famous and a bit of a dick, but watch as I earn the right to be reappraised. You will know that I deserve it because I have one old friend who sticks by me unwaveringly, I harbour regrets about having chosen an easy path towards my fame, and children react well to me.


Here's why I don't tend to bemoan sequels and remakes: on the whole, original films don't have many new ideas either. That doesn't make them bad, though. The Imitation Game, another run-through of the 'difficult genius at odds with academic hierarchy' story, was elevated enough by its cast to be my favourite film of last year. Danny Collins the film has as many new ideas as Danny Collins the singer has had in the last 30 years (none; actually, that would've worked better if I'd put this bit after the plot synopsis) but it is hugely likeable and warm-hearted, and features the best Pacino performance for a good ten years.

What's heartening is the reappearance in flashes of the old brilliance, dulled by time, diluted by unworthy projects, but still there under the surface. Like when Steve Davis came back to win the Masters in 1997, you'll be thinking. Much like the ginger magician, Pacino doesn't put in quite the hours on the practice table these days, but put a cue in his hand and he's still more than capable.

Danny Collins has been a star for 40 years, but soon gave up on writing his own earthy, acoustic songs (sung by Ryan Adams, distractingly if you're familiar with his voice) when he had a couple of easy hits with numbers dashed off by Brill Building professionals. His biggest, 'Hey, Baby Doll', a Neil Diamond-like singalong with a 'Hi-Ho Silver Lining' chorus, is the albatross around his neck: he hates it but isn't allowed to leave the stage with it unsung. He is ridiculous, coked-up and dating a woman half his age, as his stalwart manager Frank (Christopher Plummer) is happy to remind him. 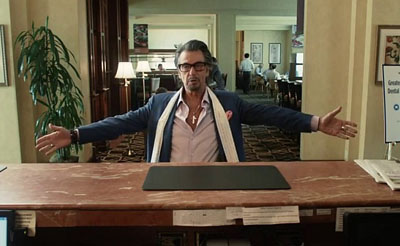 "This whole courtroom's out of order!"
"Sir, this is a hotel lobby."


Then the kicker: Frank presents him with a framed letter written by John Lennon to Danny 40 years ago but never received, praising him and telling him to be true to his music, and off we go. Rethink of life, attempted reconciliation with illegitimate son (Bobby Cannavale), rediscovery of love of music, challenging romance with age-appropriate woman unimpressed by his fame (Annette Bening). Stick 25 years on Mark Ruffalo and it's last year's Begin Again, er, again.

I use that comparison because Danny Collins treads similar ground as a tale of the musician's striving to regain his authenticity, always treated as the most valuable currency when the principal character is a creative artist. Danny does this by writing his first song in years, spurred on by Bening's Mary. This song is meant as the keystone of his redemption; the 'Nay, Baby Doll', but lyrically and musically it's mediocre, failing to convey a rich seam of latent talent, or new-found emotional depth.

Which is a shame, because it's a missed opportunity to cement a lot of good work that's gone before. The whole arc is obvious and seldom wrong-foots you, but the acting is frequently a delight. Bobby Cannavale as Tom nails the sense of having life kick you in the nuts with a down-home simplicity that softens the edges of later revelations. Bening, typically, acts everyone else off the screen even in a frothy role. And Pacino inhabits the character fully, in a way you haven't seen him do for ages. He's effected a shearing of the self in order to achieve this, binning off the recognisable shouty Pacinoisms, and turning them into the hollow charm of the aged rocker, used to first class and aware that a smile and a bit of friendly clowning goes a long way, buttering up blood relatives with the same shtick he uses on hotel staff. At first you think he's an unconvincing performer when you see him on stage, then you realise it's not Al; it's Danny, going through the motions of the corny act he's been pulling for years, on autopilot, barely aware of it. 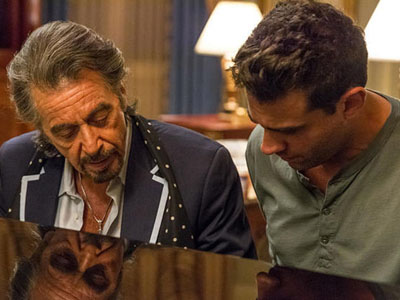 "I use this one for my encore."
"The Match Of The Day theme played with one finger?"
"That's right, son."


"You can't buy redemption," he tells Tom, but essentially that's what he goes on to do, and it gets a bit sticky when this effectively works out for the best. Though the idea is that Danny gets back to basics, rediscovers his passions and so on, it feels like he's ultimately rewarded for his initial assumption that he can just throw money at the mistakes he's made.

This is never quite reconciled, but it's apt that the shadow of John Lennon falls darkly across the whole thing (a similarly contradictory character: genius/emotional wreck; peace campaigner/wifebeater), with nine of his songs dotted throughout the soundtrack. Their use can be heavy-handed, such as when an ironic 'Beautiful Boy' snaps onto the turntable right after Tom tells his father to get knotted for the first time, but they remind us that Danny is regretting the respected artist he never became. He's comparing himself to Lennon, who died before he could tarnish his own legend and so remains forever untouchable.

Pacino, like most real-life legends lacking the good fortune to be shot dead at 40, is fighting the inevitable truth that age withers and shows you to be fallible. Jack and Jill aside, he seems happy enough to work less rather than demean himself, and good for him. This was a script that can't have looked exceptional on the page, but he and the rest of the cast have made it far more than the sum of its parts.