I'm like a reviewing machine these days. I mean, not a very efficient machine; one that churns out two things a week inbetween nodding off on the sofa in front of the football. But hey, that's British manufacturing for you. Coming at'cha down the review conveyor belt tonight: Dexter vs God.


On the slide for a couple of years since the Lithgowsome high point of the fourth season, Dexter seemed to be dancing dangerously close to its saturation point in this sixth outing. Season five passed me by to some degree, with Jonny Lee Miller not quite up to scratch as the main bad guy, and the writers desperately trying to steer Dexter back to a state of normality after his life was turned upside down by the Trinity Killer.

In the first episode of season six they plant us firmly back in Dexter's comfort zone with a traditional kill-scene, and we know we're off and running again. It's testament to how successful the character's been that we're rooting for him to start killing people all over the place again. 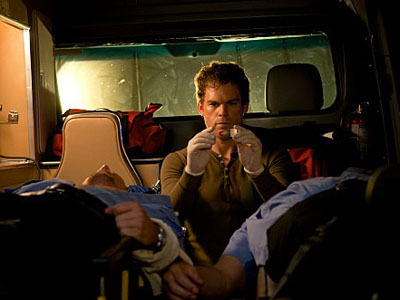 Yeah, go on Dex! Smoke those paramedic bastards like it ain't no thang!

Bits of the season setup fail to satisfy, though: Dexter's been guilty of some very lazy writing in the past and this is one of its worst offences: about ten Miami weeks after we last saw them, happily married, Batista and LaGuerta are suddenly divorced in order to set up a storyline in which she aggressively pursues the Lieutenant's job. There was a similar hole between the third and fourth seasons, in which Batista's relationship with Barbara Gianna was suddenly over, leaving the writers' path clear to hook him up with LaGuerta.

It nags at you for its pasted-on feel, and while it doesn't much affect your enjoyment overall, the feeling that any story developing might just be artlessly binned at any second never goes away. (Remember that Internal Affairs officer who pursued Quinn for being dirty? Did she just give up, then? Then Debra found out that the Ice Truck Killer was Dexter's brother and presumably just thought: "Meh, coincidence I guess", and forgot about it.)

The broad theme is religion, and Dexter's search for meaning, something that's never seemed to bother him much before. He meets Brother Sam (Mos Def, or 'Mos', as he's called in the credits, or 'Yasiin' as he's now known - jeeze, dude, pick one already), initially through trying to kill him, natch, who turns out to be a genuine converted man o' the cloth.

The idea is that this relationship makes Dexter question his own atheism, tying in with the Doomsday killers, this season's religious nutjob Big Bads. This is never quite followed up fully, though, and ends up as a series of oblique references rather than a consistent theme. 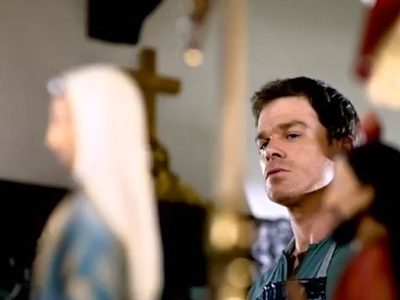 He's literally about to garotte the Virgin Mary.

Debra's journey is more satisfying, on which she questions her feelings for Dexter and plays a part in the finale that will finally turn the whole series on its head. It's something that's been coming a long time, and that we've been teased by before. In terms of the writing, it took some guts, because it changes the whole story in a way they can never row back from (unless they panic and turn it into some shitty dream sequence - see above). Almost as much guts as it took for me to write that paragraph without revealing what the ending was. In many ways I'm as heroic as a Navy SEAL in this regard.

I was a latecomer to Dexter, but it's probably the best TV discovery I've made this year. As with any show you suddenly can't get enough of, though, I raced through the first four seasons without stopping to appreciate them properly, and ended up slightly disappointed by the fifth and now the sixth. There's a lot wrong with the series overall, but it's stuff I can generally overlook in favour of the bigger picture. And sure enough, season six is guiltier than any other of the writers' worst habits, but there's still more than enough to carry it on its own merit, and a climax whose impact is going to be fascinating to watch come September.

By which I mean, it'll be on in the States in September. I'll have no way of watching it till it turns up on FX six months later. BitTorr-what? BitTorrent? No, can't say I've heard of it.

Featured partnership
If you are looking to watch TV online, then why not sign up to the free trial on LOVEFiLM. This allows you access to a range of movies and TV series including Doctor Who. Visit the site to sign up for free today.
More:  Dexter  Michael C Hall  Jennifer Carpenter  Showtime  FX
Follow us on Twitter @The_Shiznit for more fun features, film reviews and occasional commentary on what the best type of crisps are.
We are using Patreon to cover our hosting fees. So please consider chucking a few digital pennies our way by clicking on this link. Thanks!