According to the internet, every series finale is either the greatest thing in recorded history or the worst thing ever visited on the commenter's eyes, undoing all the good work that came before it. Consensus on Dexter's swansong seems to be the latter. But I'm here to tell you that finales aren't as important as all that, and that this one, while flawed, was better than everyone seems to think. And you should take note, because like everyone else's on the internet, my opinion matters gravely. (Spoilers follow.)


Why do finales draw so much discussion? Speculation on the final outcome to Dexter has been drowned out only by Breaking Bad's over the last couple of weeks, and in 18 months we'll all be doing the same when Mad Men is drawing to a close. Actors and showrunners doing their final round of press in the finale run-up get asked the same question in every interview: "How's it going to end?" No one expects them to answer. No one wants them to answer, because the journalist couldn't use it anyway. Yet still they ask.

Does an ending colour everything that went before? I've never found that. Watching The Sopranos this year for the third time, the question of whether or not Tony died at the end didn't occur to me until I was getting near the finale; it didn't matter. There was far too much else to think about that I was watching now. I can still watch mid-series episodes of House and enjoy them without thinking, "Yeah, but faking his own death later on kind of dwarfs all this." The ending is only one small part of a huge story. 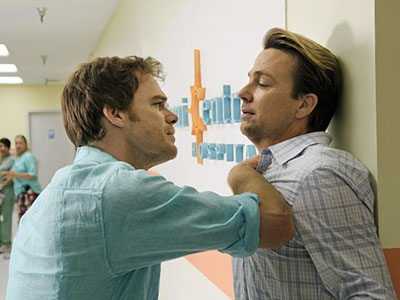 
I think one of the reasons why Dexter's finale was so hard to pull off was that it relied so much on what happened to one character. In these other examples, there was satisfaction in knowing that the other characters would carry on somehow after we left them. Dexter? Less so. I'm not sure anyone much cares whether Batista will eventually realise that hats make him look like a tit, or Masuka will start wondering why his daughter isn't ethnically Japanese. We're happy enough to leave them where they are. What's important is what happens to Dexter. And to Deb, but really only in how her outcome relates to Dexter's. She's only ever been written as a foil for him and how he relates to normal human beings.

His becoming a normal human being has been the show's main thrust for the last two seasons, and it's been pretty successful. Taking a character who was at pains to stress (in voiceover, constantly) that he was incapable of human emotion to a place where he seems to love others has been an arduous journey, but they've chipped away effectively enough at his psyche over the years to make it work. Slowly but surely, Dexter's been breaking good.

The finale, clunky and admittedly nonsensical though it was in places, served very effectively as a logical conclusion to that character development. There was the usual debate about whether he needed ultimately to be 'punished' for his crimes - as much in the writers' room as on the internet, you'd imagine - and he was. Dexter has been brought full circle: he's finally got to a point where he loves a woman and his son, and could begin something approximating normal family life. And he seems to have successfully damped down the urge to kill, which is a plus for a family man.

And yet he knows now that he destroys everyone he loves. He even tells us so, in the only bit of voiced-over inner monologue in the episode - a paucity that tells us his mind is clearer than ever - and so removing himself from them into a life of solitude, just when he's learned how to experience these emotions, is the ultimate punishment. 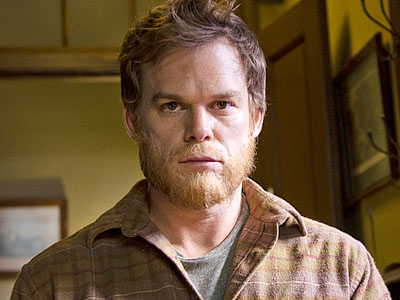 
In fairness, most complaints aren't so much about the logical steps as they are about the execution. There are holes in it, for sure - the ease with which he took Deb's corpse from the hospital was ridiculous, as was the general GTA-style anarchy brought about by one Miami hurricane.

But I don't demand realism from Dexter in the same way I do from, say, Breaking Bad, whose finale stuck rigidly to its rational, cause-and-effect manifesto and so didn't jar with the rest of the series. Dexter has always been an essentially daft knockabout romp: Carry On Serial Killing. Its lead character is unbelievable - his brand of selective psychopathy would flummox real-life psychologists, which I know for a fact having read a science-light mass-market paperback and the psychopathy Wikipedia page - and always has been. I've never looked to this show to provide me with any insight into the human condition, and I've no idea why anyone would. It'd be like asking a chimp to proofread your CV.

So let's not fret too much about an episode that brought a wilfully illogical show to a logical conclusion. And let's not bother going quite so nuts about finales in future, eh? Sooner or later, the pressure will get too much and somebody will really fuck one up. Remember, if you see Don Draper marry Peggy in 18 months' time, it's on you.

More:  Dexter  Michael C Hall  Jennifer Carpenter  FOX  Showtime
Follow us on Twitter @The_Shiznit for more fun features, film reviews and occasional commentary on what the best type of crisps are.
We are using Patreon to cover our hosting fees. So please consider chucking a few digital pennies our way by clicking on this link. Thanks!