Imagine a world where sexy teens battle against a dystopian landscape, and it's up to one plucky heroine to rise up and overthrow a corrupt governing body. You've just imagined The Hung- Oh no, wait, this is Divergent. And that is probably Divergent's initial problem, trying to overcome the inevitable comparisons with that other book/film that also has a lead girl in it. That and the fact that Theo James' magnificent cheekbones just REFUSE to QUIT. Seriously, you could cut glass with them.


Fabulous bone structures aside, there's also the problem that's true of any adaptation in that fans of Veronica Roth's best-selling novel will already have a head start. Which is a great help, seeing as the film tends to gloss over its post-apocalyptic premise, distracting you from questionable dialogue and plot holes with some thrilling action scenes and ridiculously good-looking people. But if you can overlook its few flaws, forget about Katniss and jump aboard, it's still quite an enjoyable ride.

It's really hard to try and explain the world of Divergent without prefixing sentences with "for some reason" and this is where the expanded knowledge from the book comes in handy. In a nutshell, for some reason, Chicago has become a war-ravaged, self-contained city, and for some reason civilisation has been divided into five factions in order to keep the peace. But while Divergent spends its first hour or so doing the important job of establishing themes and plot mechanics, those of us that have read ahead can sit back and enjoy those fabulous cheekbones. 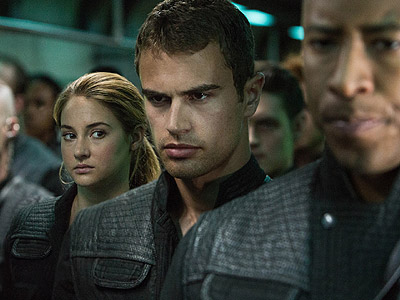 
The five factions are Dauntless, Abnegation, Erudite, Amity and Candor. Each faction is based on human virtue, so Candor always tell the truth, Erudite are the clever ones and Amity…..they're like, the farmers or something. Those who don't fit into a faction are 'Factionless', and those who possess more than one virtue are Divergent, which for some reason is a Very Bad Thing and is considered a threat to society.

Beatrice Prior (Shailene Woodley) is one such Divergent who has been born into Abnegation. This is the selfless faction, who reject vanity by hiding mirrors in their homes, and walk around helping others dressed in shapeless grey threads, so thankfully Muji are still doing clothes in the future. Symbolism isn't exactly subtle in the book or the film; the Erudite strut around in sharp blue suits and killer heels to match their killer intellect, and the Candor wear black and white, because they tell it like is, yeah?

When the Dauntless eventually rock up it's pretty clear who the fun faction is. These guys sport tattoos and facial piercings, and whoop and holler, jumping off buildings and moving trains like a post-apocalyptic version of Stomp. Amongst this faction are Eric (Jai Courtney looking disturbingly like Macklemore, sans fur coat) and the tough-but-forgiving Four (Theo James and his lovely face). Beatrice, understandably, is quite taken with the boisterous Dauntless crew whose job it is to police the city, but struggles to reconcile this with her strict and selfless Abnegation upbringing, illustrated through a series of wistful stares and rule-breaking (like staring into a spoon). 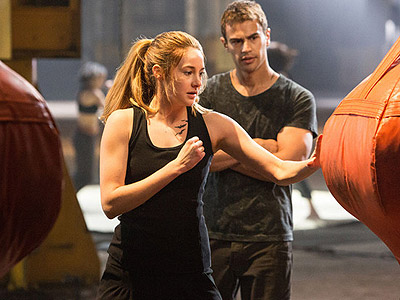 Still, it's nothing that a good training montage can't sort out.


At the Choosing Ceremony, where every teen must decide which faction to live with, Beatrice makes the shock decision to reject her faction and her parents, and join the Dauntless and their teen police force, throwing herself into their, er, dauntless lifestyle. This is where the action kicks in and the training sequences are terrific, particularly a nail-biting version of Capture The Flag across the ruins of the city. The other Dauntless initiates literally kick and punch seven bells out of each other; they learn to throw knives, shoot targets and jump off trains that for some reason never stop at any station (which should be familiar to anyone who's tried to use the Northern Line at the weekend).

Rebranding herself Tris, our wily Divergent throws herself into training with reckless abandon, climbing Ferris wheels and zip lining through city streets to a pumping dubstep soundtrack, making it hard not to get swept up in the rush of adrenaline. If you don't mind occasionally being punched square in the face, being Dauntless looks like it would be a lot of fun. 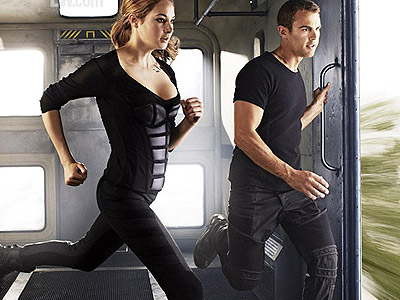 Get ready for some SUPERIMPOSED ADVENTURE TIME.


In many ways the film is an admirable and faithful adaptation: the settings as described in the book are pretty much what you see on screen, from the crumbling vista of Chicago to the Dauntless compound, which is essentially every hipster bar in Shoreditch on a Friday night. There's quite a sense of satisfaction from seeing these come alive, as well as the spot-on casting. Kate Winslet in particular is well placed as the icy cold Jeanine Matthews, leader of the Erudite who has major beef with Abnegation and the Divergent.

As convincing as Winslet is, however, her character and most of the others are largely underwritten. Woodley does an admirable job considering she's in almost every scene, but even in the book (or the first one at least) Tris is a largely humourless character who can be annoying at times. Again, Divergent the film doesn't deal with subtlety and we're even treated to the clichéd "Look, it's Tris and she's winning us over!" scene, when a frenemy approaches her and acknowledges that what she did "was cool", presumably because she can't subtweet her because the future doesn't have Twitter. Theo James has some particularly terrible dialogue, but he's overall quite likeable and his handsomeness is enough of a distraction, as is his on-screen chemistry with Woodley, which is a real highlight of the film (unlike, say, Katniss and Peeta).

It's not until midway through that the actual plot kicks in and Tris and her Dauntless pals are swept up in a political storm to stop A Very Bad Thing from happening. The climax is action-packed and frenetic to the point of being absurd: Tris is too busy overthrowing the government to mourn a particularly tragic loss, and we don't find out the logic behind Winslet's nefarious scheme, just that it involves some kind of mind-control serum. 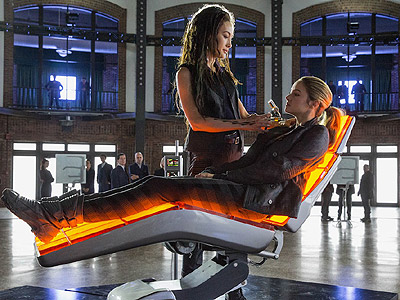 And an awesome gaming chair.


It's these niggling plot holes that are actually Divergent's biggest problem. Why is the city self-contained? Why do the trains never stop? How do the serums work? Why did they decide that a bunch of crusty jugglers should be the police of the city? How does Tris manage to apply a flawless sweep of black kohl across her eyelids if she's never been allowed to use a mirror? The answers to these are slowly revealed throughout the other books (SPOILER: apart from the makeup) and it should be easy to spot anyone who has already read the Divergent saga in the cinema: they'll be the ones chewing on their fists trying not to give the game away.

Even without any prior knowledge, there's still plenty to convince you jump aboard the trains that never stop and see where they take you. The heavy-handed clichés and plot holes are forgiveable in light of the fun action sequences and all the pretty on screen (so much pretty). But trust me when I say that, for some reason, stick with the saga in the event that the sequels will all materialise, because the ultimate pay off when you discover what it's all for will be definitely worth it. (*gets tattoo, runs off to pumping dubstep soundtrack*)

More:  Divergent  Neil Burger  Shailene Woodley  Theo James  Kate Winslet
Follow us on Twitter @The_Shiznit for more fun features, film reviews and occasional commentary on what the best type of crisps are.
We are using Patreon to cover our hosting fees. So please consider chucking a few digital pennies our way by clicking on this link. Thanks!