I've seen Django Unchained twice now. After the second viewing, I looked back through the notes I'd made after the first, and realised that most of them were now useless. As with a lot of Quentin Tarantino's work, it takes more than one watch to fully form an opinion, but in this case I'd changed my mind almost entirely. I read back through them, crossing out complaints regarding its lengthy, meandering scenes and its jarring refusal to end at its obvious conclusion. But I understand these things better now for what they are: exercises in character development that make this one of its author's richest and most engaging works.


Amidst all the predictable reignition of the violence-in-cinema debate – which Tarantino rightly pointed out to Krishnan Guru-Murthy last week is more accurately just a revisiting of the same debate, on which he's already stated his views – Django Unchained comes with the usual promise of blood, guns and self-conscious genre tribute. If the posters didn't give it away, this time he's appropriating the Western, turning it into a "Southern", as he puts it, on the plains and in the mountains of the American South just before the Civil War. Lincoln is still a few years off getting his act together, so slavery is still legal, and slave Django (Jamie Foxx) has been separated from his wife, Broomhilda (Kerry Washington), and sold on. Into his life rides bounty hunter Dr King Schultz (Christoph Waltz), who trains him in his profession and gives him his freedom, giving Django the opportunity to rescue his wife from plantation-owner Calvin Candie (Leonardo DiCaprio).

As you'd expect given the author, much of this is rendered in long dialogue exchanges, and their lengthiness was my main complaint on first viewing. You could liken a few scenes to the farmhouse and cellar bar ones in Inglourious Basterds, which linger over drawn-out conversation. Back in Nazi-occupied France, the justification for these was the tension they expertly inflicted on you; here it's less obvious at times. But what I initially found frustratingly slow made sense the second time around, on realising that each exchange was gradually enriching these characters, making their motives clearer. Nothing is for nothing here: throwaway 'Royale with Cheese' dialogue is almost completely absent. 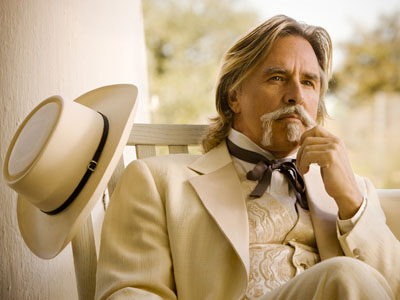 Don Johnson, ticking the Tarantino 'bring back a star from the eighties' box.

This gradual fleshing-out applies particularly to Schultz, the most rounded and sympathetic character Tarantino's written in years. A white man who abhors slavery, he's our own eyes and ears into this world, and his arc is touching: there's no reason for him to help Django rescue his wife other than that, as he explains, having given Django his freedom he feels responsibility towards him. Throughout, Waltz shows how capable he is of more depth than the veneered menace of Hans Landa. Just as impressive is DiCaprio, who takes a Southern caricature and adds some much-needed bite: a scene in which he outlines his belief in phrenology, all the while threatening to snap suddenly into fury, is impossibly tense. In both cases, just as with Samuel L Jackson's turn as the head house slave Stephen, you realise how much Tarantino's work hinges on finding actors comfortable enough to take long chunks of dialogue and give it real meaning.

What Django Unchained is, as per Inglourious Basterds, is revenge fantasy. Now, I take some discomfort in Tarantino's approach to this, in which for the second time in a row he chooses a period in history when a group of people did terrible things, and has them brutally and indiscriminately slaughtered by the people they oppressed. In neither case is he a member of the afflicted group himself, and I can't quite shake the feeling that he's aiming for solidarity with them. Maybe, of course, there's nothing wrong with that, but predictably there are racial issues to address here. While I don't particularly feel, as one of the whitest people on planet Earth, that the film's regular use of the n-word is a debate I'm qualified to engage in, I will say that it seemed to be used with some relish. Almost as if the writer had felt relief on discovering that it was historically and contextually justified, and that he had licence to go to town with it. 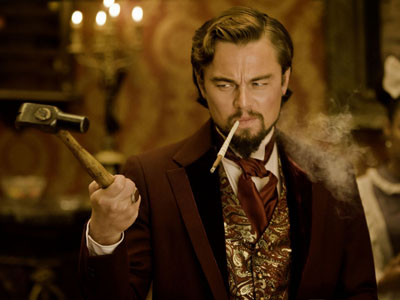 DiCaprio: if he had a hammer, he'd hammer in the morning, while always keeping a postmodern sense of ironic distance from the genre's conventions.

More troubling is the murder, played for laughs, of a white character who keeps slaves but is never shown to mistreat them, which rather muddies the film's racial politics. Now, obviously it's not cool to keep slaves as long as you're nice to them, but this broad-brush approach to revenge ignores the fact that these characters live in a racist society, and one in which none of us white folks can truly say how we would've behaved, when we have the advantage of living in a more enlightened age. At this point the conflict becomes less about good versus evil than it is about black versus white. Were all white people, bar affable liberal Germans, living in the South at the time evil, and deserving of a bloody death? I doubt it. I'm not qualified to say, of course, but then neither is Quentin Tarantino.

This last point is the only negative opinion I held on first viewing that I still did after the second, in which I felt more involved in the characters as people – something Tarantino's style never really encourages – than with any of his films since Jackie Brown. Part of this is because this is one of his least stylised works: as ever he can't resist drawing attention to the artifice of cinema, with quick zooms, non-period music and captions covering the screen, but it's at a minimum. This is an homage to the Western, sure, but its great source of satisfaction is that it's more concerned with character and story than it is with announcing its generic inspiration. Tarantino has successfully, and wonderfully, paid tribute to a genre while, for once, resisting the temptation to shout about it. The 'D' is silent, after all.

More:  Django Unchained  Quentin Tarantino  Jamie Foxx  Christoph Waltz  Leonardo DiCaprio  Samuel L Jackson  Don Johnson
Follow us on Twitter @The_Shiznit for more fun features, film reviews and occasional commentary on what the best type of crisps are.
We are using Patreon to cover our hosting fees. So please consider chucking a few digital pennies our way by clicking on this link. Thanks!