Considering the X-Men movies can't even stay consistent one movie to the next, it's a minor miracle the Marvel Cinematic Universe remains a cohesive whole, 8 years and 14 movies after Nick Fury first asked Tony Stark to join his professional LinkedIn network. We've had men of technology, beasts of rage, Gods from other realms and soldiers forged in war, all now reading from the same script. The latest recruit to the MCU is Doctor Strange, who heralds the arrival of the world of magic, but - like Arrested Development's Gob Bluth and his Alliance of Magicians - demands to be taken seriously. Disbelief is being suspended at a comfortable level by now: if you're cool with purple space tyrants and talking raccoons, chances are the addition of sorcerers, supreme or otherwise, isn't going to upset the apple cart.


By now, the formula - as it is customary to mention when reviewing any Marvel movie - has been honed to perfection: there are no risks taken here. Benedict Cumberbatch's Stephen Strange is essentially a Life Model Decoy of Tony Stark: he's an arrogant and egotistical playboy genius whose life is set on a righteous path after a near-fatal accident forces him to change his perspective, with a hard-working gal he secretly loves back home to keep him honest - hell, they even have the same moustache guy. 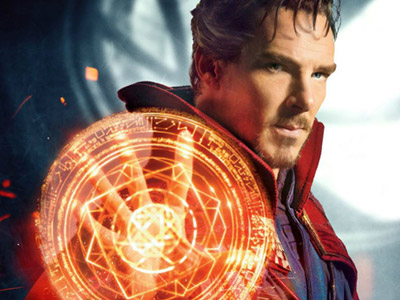 "Look into my eyes, not around the eyes, into the eyes."


Doctor Strange undoubtedly sees Marvel tracing old paths, but as with Ant-Man, less lofty expectations result in a pleasant surprise that offers just the right balance of action and humour. I would go as far as saying Doctor Strange is up there with Guardians Of The Galaxy as the funniest of Marvel's movies to date, which I would not have predicted from the amount of po-faced David Blaine-esque, Tony LeMesma hand-waving "astral plane" bullshit I got from the trailers. Doctor Strange is inherently silly (every mystical name or place could easily be substituted with 'Eranu' or 'Uvavu') but the script constantly undercuts the more pompous moments a beat or two before you get there yourself. Strange's Magic Carpet-esque cloak of levitation gets some proper Road Runner moments of physical comedy which are a complete joy. It's easily one of my top eight movie cloaks.

Built on familiar foundations, Doctor Strange is nonetheless one of the most distinct Marvel movies yet, thanks to a screenplay unconcerned with the shackles of reality. Where possible, director Scott Derrickson turns action sequences into kaleidoscopic showpieces: although the movie does still suffer from standardised fight scenes (heroes and villains use 'astral' weapons like spell shields and swords made out of clouds or some shit, which still behave like normal weapons), the constantly churning fractional cityscapes do give these sequences a frisson of excitement. The final act has its cake and eats it, delivering not only the most inventive final action sequence in Marvel's short history, but also one of its boldest scenes, in which heroism is defined as something more than who has the biggest muscles or the strongest magic. It'll piss off a lot of idiots, which is great, obviously. 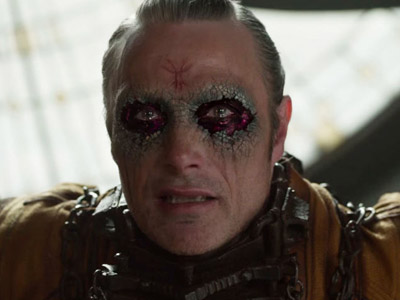 
Doctor Strange does have a comparatively high ratio of wasted acting talent, with thankless roles going to Rachel McAdams, Mads Mikkelsen and Chiwetel Ejiofor (who fails to make use of astral hover-boots) but the movie coasts on Cumberbatch's steely presence and Tilda Swinton's ice-cold zen delivery. It takes a while to warm to Cumbo, who is very much Doing An Accent here (thankfully the weird elastic-mouthed over-enunciation that spoiled Star Trek Into Darkness is absent), but he find his rhythm eventually, and his comic timing is excellent. (Incidentally, Benedict Wong makes for an excellent foil, and provides set-ups for at least three crowd-pleasing gags).

I think we're at a point now where we don't really expect surprises from the Marvel Cinematic Universe, we just demand consistency and quality, and by and large, the MCU production line parps out movies that meet - and exceed - that criteria. Doctor Strange is not sexy or unique or particularly original, but it is polished, entertaining, well cast and creatively staged. The worst thing you can say about it is that it doesn't aim high enough, but to be honest, the fetid stench of Suicide Squad still hasn't left the fabric of the cinema seats: it's just nice to be back in the hands of seasoned professionals again.

More:  Doctor Strange  Scott Derrickson  Marvel  MCU  Benedict Cumberbatch  Chiwetel Ejiofor  Mads Mikkelsen  Tilda Swinton  Rachel McAdams
Follow us on Twitter @The_Shiznit for more fun features, film reviews and occasional commentary on what the best type of crisps are.
We are using Patreon to cover our hosting fees. So please consider chucking a few digital pennies our way by clicking on this link. Thanks!