While everyone is still going nuts about The Dark Knight Rises (and rightly so because it's awesome), let's not forget there are other films out as well. Like this one, for example – a brightly-coloured, sickening mass of environmental propaganda dressed up as a kids film, that'll make your offspring ask lots of questions, like "Daddy, why aren't we watching Batman?"


Vibrant colours, weird-looking critters and cheap throwaway visual gags: The Lorax – the fourth Dr. Seuss story to make it to the big screen – offers just enough distractions to keep kids' attention for an hour and a half.

Behind the fluffy animals, singing fish and environmental awareness, there's a distinct stench of Hollywood manipulation wafting dangerously close to the 'corporate greed is bad' camp. The Lorax tells the seemingly-innocent tale of Ted (Zac Efron), a 12-year-old lad who lives in the entirely artificial, walled-off city of Thneedville with his mum and granny. Desperate to get his feet under the table with girl across the street Audrey (Taylor Swift), he sets out in search of the one thing she longs for: a real tree.

Equipped with his motorbike/Segway hybrid thingy and a childlike sense of wonder, Ted heads off into the bleak outside world and soon crosses paths with the reclusive Once-ler (Ed Helms), an elderly man responsible for the depletion of the forest through his own ruthless business venture. Once-ler regales Ted with the story of his run-in with The Lorax (Danny DeVito), a pint-sized, moustachioed tree-hugger who looks like something a cat might throw up. 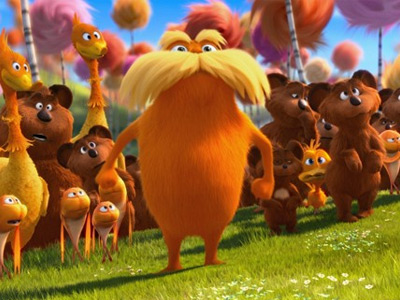 The Happy Mondays reunion was exactly as he remembered them.


Promoting environmentalism and anti-consumerism in a children's film is harmless enough, but seeing as most of the audience will be too young to understand such a message – especially a patronising one delivered like a sermon – it's a bit of a lost cause. Parents will find it all very condescending.

The sloppy, unfocused narrative doesn't help matters either. As the film goes off on several different tangents, we're introduced to unnecessary characters and redundant plot points – the Once-ler's annoying hillbilly family being the biggest perpetrators. What we're left with are two separate time periods struggling to contain three stories going on at once. In an over-filled 84 minutes, the Lorax becomes a supporting character in his own film.

Much of the simplicity of the original source material – which itself is a sly commentary on the dangers on over-industrialisation – has been lost in translation. Audrey, the reason Ted risks his life looking for a tree, is a new addition, as is the villainous Mayor O'Hare (Rob Riggle) and his Del Boy-esque scam of bottling and selling fresh air. 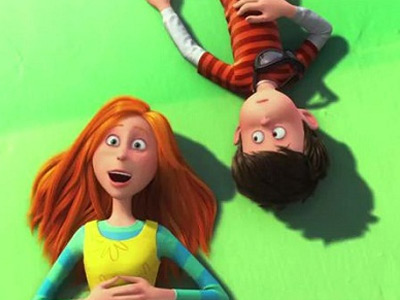 
Thankfully, tucked away behind all the environmental preaching and relentlessly irksome songs are some choice voices at work. Danny DeVito is perfect as the gruff, diminutive Lorax. Ed Helms and Rob Riggle, despite their singing numbers, still sound like they're having a blast, and Betty White is wonderful as Ted's grandmother – even if the 'hip-hop granny' routine is as clichéd as they come.

Thneedville itself is a visual treat, boasting lots of imagination, plenty of detail, abstract houses and cheerily-coloured shapes. It's what I imagine an acid trip in an Early Learning Centre would look like. The bright ideas and healthy supply of gags almost make up for the paper-thin plot.

Ultimately, The Lorax is overshadowed by the directors' overzealousness to promote environmentalism, and remind children about the importance of nature and not to be too reliant on artificial products. It's a shame that in doing this, the storytelling is sacrificed. There's some poetic irony in there somewhere. Want my advice? Take the kids to see Batman.

More:  Danny Devito  Ed Helms  Zac Efron  The Lorax
Follow us on Twitter @The_Shiznit for more fun features, film reviews and occasional commentary on what the best type of crisps are.
We are using Patreon to cover our hosting fees. So please consider chucking a few digital pennies our way by clicking on this link. Thanks!