Dredd, of course, is not the first time we've seen the surly 2000AD lawman on screen. The first adaptation was, to put it bluntly, dreddful: completely mishandled, badly cast and creatively bankrupt. Fans were not happy, and with good reason. I mean, I can just about understand the casting of Martin Shaw, but relocating the story from Mega City One to the British legal system was bizarre and the recasting of the title character as a lovelorn High Court Judge was sacrilege. Hang on. Oh. Yeah, never mind. I was reading the Wikipedia page for BBC1 legal drama 'Judge John Deed'. I guess most of what I said also applies to the 1995 Sylvester Stallone Judge Dredd movie. Except the bit about Martin Shaw.


To tell you the truth – and maybe it's the nostalgia surrounding mid-90s Stallone action vehicles talking here – I quite enjoyed the first Judge Dredd movie. It's awful, obviously, but in ways you don't really care about when you're 15 and stupid. Looking back at The Best Movie Rob Schneider Ever Made as an adult, with its disregard for the source material and its hambone overacting (pipe down, Armand Assante), it's the perfect example of why not everything popular HAS to be a movie. The comics are pulpy and ridiculous and hyper-violent, which doesn't necessarily translate that well on screen (see also: The Punisher). Naturally, the laws of Hollywood inevitably required a gritty reboot, so the laws of Ali required I approached this new Dredd movie with cynicism.


Thankfully, fears that it'd be one of those rare reboots that's even worse than the terrible original (naming no names, Street Fighter: The Legend Of Chun-Li) quickly evaporated. Dredd is a movie that embraces its limitations and turns them into strengths. The (relatively) tiny budget shows; save for a few CG cityscapes and an ill-advised motorbike chase on what looks like Chiswick ring road, the entire movie takes place on the various floors of locked-down, windowless tower block, Peach Trees. Karl Urban's chin plays the eponymous judge/jury/executioner, paired up with Olivia Thirlby's rookie psychic in a mission to bring down Lena Headey's insane drug pusher Ma-Ma, floor by floor.

Much like The Raid, the action is broken down into videogame-style chapters: Dredd defeats one wave of disposable enemies to be rewarded with safe passage to quite literally the next level. The comparison to Gareth Evans' turbo-charged tower assault does Dredd few favours in the combat stakes, but Urban has great presence even under the helmet, and Alex Garland's screenplay is aggressively single-minded: dispense justice, attack the block, get the bad guys. Dredd the movie requires little more than for Dredd the judge to be a badass. Quite frankly, that's all it needed to succeed. This reboot was all about re-establishing the character, and Urban puts his stamp on it with his size-nines. 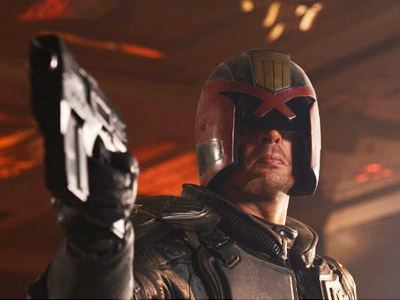 "In all seriousness though, I am actually the law."


The actor has a good handle on the character's requirements, namely a dialled-down performance that's unshowy and composed: there's no Christian Bale-style Bat-growl needed here. Urban gives the character humour, too; he's hardly cracking wise throughout, but the occasional deadpan one-liner does help you warm to a guy who looks like he'd be thrown out of a funeral for being too much of a downer. The corners of Dredd's mouth are in no danger of turning up: as required, he sports a look throughout like Olivia Thirlby has been dropping some particularly eggy guffs (that's where some windows would have come in handy). Thirlby is a fine asset, compared to Rob Schneider at least, adding a different dimension to proceedings, even if her psychic abilities open up a few extra plot holes. Like, does it only work half the time or what?

Director Pete Travis has only rote thriller Vantage Point as a notable achievement on his CV, but he performs wonders with what little he has to work with here. While Peach Trees is fairly drab and hardly screams 'TOTALLY MENTAL DECAYING FUTURE SOCIETY!', Travis does well to use his claustrophobic surroundings to good effect, meaning you're never in doubt where the action is taking place or who's killing whom.

The director even finds room to work in some creative flourishes, thanks to the drug Slo-mo: a does-what-it-says-on-the-tin stimulant that slows time to one per cent its normal speed. Essentially, it's an excuse for bursts of technicolour and highly cinematic, Max Payne-esque gunfights, but Slo-mo is one of the best visualisations of drug use in recent memory (as opposed to, say, the camera going a bit juddery, or letting Nicolas Cage do a thing). Headey's character introduction sees her zonked, splish-splashing in a bath and going gooey-eyed at the numerous shimmering droplets of water hovering before her. You can see why the residents of Mega City One are going gaga for Ma-Ma's wares.


Dredd does suffer a little when compared to The Raid, but that's hardly the fault of this movie, which started development way before Evans' epic was unleashed on the world. If you're looking to make comparisons, there's only one film you need to judge Dredd alongside; unsurprisingly, Urban's take on the character easily surpasses Stallone's misguided attempt, and probably your own low expectations with it. It's a simple story done right, without complication or interference, with all the right people involved. Dredd may be low on ambition, but ambition is what comes next. Give it a sequel and a cash injection and let's see Mega City One – and maybe even Judge Death – in all its gory glory.

More:  Dredd  Judge Dredd  Karl Urban  Olivia Thirlby  Pete Travis  Lena Headey
Follow us on Twitter @The_Shiznit for more fun features, film reviews and occasional commentary on what the best type of crisps are.
We are using Patreon to cover our hosting fees. So please consider chucking a few digital pennies our way by clicking on this link. Thanks!