"See Paris die!" In 2005, Warner Bros took a novel approach to marketing their horror remake House Of Wax: they knew audiences wanted to see the film's star, Paris Hilton, meet a grisly end, and they didn't shy away from spoiling her character's fate. You can't help but think, then, that Warners have missed a trick promoting Edge Of Tomorrow, a sci-fi time-loop thriller that sees star Tom Cruise killed in around 50 different ways, only to wake up very much alive the morning before. "See Tom die!" would get way more people into the cinema than "Live. Die. Repeat" and that's a shame, because Edge Of Tomorrow is a terrific action movie that deserves to be seen by as many people as possible. It's taut, twisted and blackly funny in ways that only movies in which Tom Cruise gets crushed under the wheels of a truck can be.


It baffles me why more people don't cast Cruise as a douchebag, because he plays the role so well. He's adequately sleazy here as Major William Cage, a smarmy Army PR spin doctor who can't put a positive slant on massive casualties during an alien assault and finds himself suited, booted and on the frontline faster than he can say "How do you take the safety off?" Dying an ignominious death after just five minutes like some total fucking n00b, Cruise wakes up with a startle, back on the Army base, where his drill sergeant is waiting and ready to break his spirit afresh. If you have to fish for a poster quote, something like 'Groundhog Day meets Saving Private Ryan meets Starship Troopers' is about as reductive a line as I can manage at this short notice. 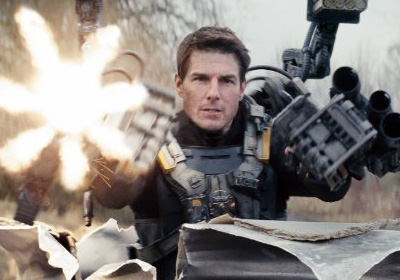 That's a very pretty sunflower, Tom. Now put it down and go back to war.


The point is, like Phil Connors, Cruise has to work at becoming the hero. Part of the problem of being Tom Cruise: Movie Star is that he can't ever turn off the megawattage, or even dim it sufficiently for his star not to be seen on screen. The repetitive nature of Edge Of Tomorrow's plot – and the levelling-up that the videogame-esque structure allows – means Cruise earns the right to flash that grin. Crucially, he's paired with a dynamite Emily Blunt as a war hero known as the "Full Metal Bitch", who carries a sword so large she must have the wrists of a world champion masturbator. Blunt is Cruise's superior on the battlefield: smarter, faster and stronger in every way. Only a needless kiss in the last act sours their relationship; otherwise, they're two badasses working a do-or-die co-op mission, and gender has nothing to do with it.

Edge Of Tomorrow excels in setting its parameters early on and sticking to them: save for a strange, tacked-on coda, the movie sticks to its own internal logic and has buckets of fun with it in the process. Once it's established that Cruise can't die, director Doug Liman starts chucking him under cars for fun: the first half of the movie is basically a succession of death scenes played for laughs. Blunt's character Rita, who previously held the power that Cage has, is in on the joke too, insisting on "resetting" him with a bullet to the brain every time as he so much as twists an ankle. It's a riotous concept and Liman milks it for all it's worth, editing together a solid hour of visceral action mixed with hearty laughs. Think of how much time you spent puzzling over X-Men: Days Of Future Past's time travel paradoxes; even compared to relatively straightforward temporal thrillers like Looper, Edge Of Tomorrow feels like a breeze. 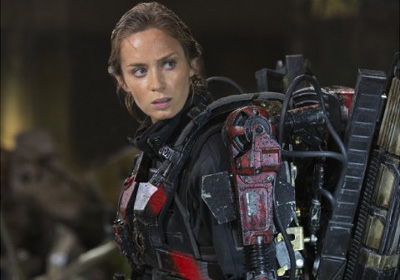 Xbox transportation was still a ball-ache, even in the future.


The movie's final third, however, is a mixed bag. Having spent the first two acts playing in a sandbox of its own making, the film deems Cage lose his powers – it's an effective switcheroo, making the character feel more vulnerable than ever while really upping the stakes. It's here, however, where Edge Of Tomorrow loses its identity somewhat, following a more conventional path to the finish: still one with its fair share of thrills, but one that could be from any blockbuster with money to burn. It also suffers from the fact it's set at night and the 3D is terrible. I long for a dystopian future that is brightly lit.

Thankfully by that point, Edge Of Tomorrow has made enough noise to distract you from the fact that it's slowly morphed into A Tom Cruise Movie. It utterly delivers on its concept and equally serves its two leads, all the while keeping the threat level constant and evolving the story past the point of gimmickry. Not many blockbusters this year have displayed smarts like these, and I doubt many will. Plus, of course, Edge Of Tomorrow has the added bonus of Tom Cruise getting shot in the face about a hundred times, and if that doesn't get you into the cinema, nothing will.

More:  Edge Of Tomorrow  Doug Liman  Tom Cruise  Emily Blunt
Follow us on Twitter @The_Shiznit for more fun features, film reviews and occasional commentary on what the best type of crisps are.
We are using Patreon to cover our hosting fees. So please consider chucking a few digital pennies our way by clicking on this link. Thanks!