As part of a sustained effort on my part to watch more films featuring female leads and more films in a foreign language (an effort which so far has resulted in me seeing zero of either), I found myself at Elle, the new movie from Paul Verhoeven. Given that it fit those two criteria (Isabelle Huppert? Check! French? Check!) I gamely plopped myself into the screening room chair, not knowing what it was about. Some two and a half hours later, I still wasn't sure. I was told this was an exciting and edgy new thriller from the director of RoboCop.


Elle opens with the sound of a woman groaning intimately; it's only when we hear glass breaking and a physical struggle that we realise the sounds are not of a sexual nature but a violent one, as Michele (Huppert) is raped by a masked intruder. Verhoeven continues to blur the dual motifs of sex and violence throughout the film; Michele later fantasises about her attacker, and even appears to enjoy repeat attacks, using her body as bait. This is Verhoeven in provocateur mode, with Huppert bringing shades of grey to a character who is never allowed to be entirely sympathetic. 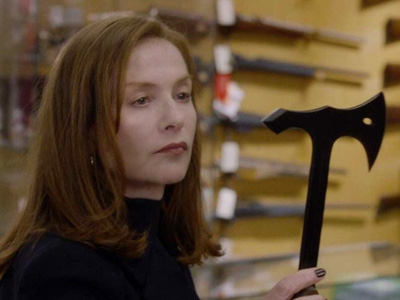 Probably because of all the axes she keeps wielding.


With echoes of Michael Haneke's Cache, Elle entwines several whodunit mysteries and invites you to play close attention. As well as the riddle of her masked attacker, Michele must discover who is sending her abusive messages at work, where she runs a successful videogame company, while her own backstory is teased out in small doses as we discover she's the daughter of an infamous serial killer, with hints that she might have even been complicit. Each plot strand is an opportunity for Michele to exercise power: whether she's rape-revenging, amateur sleuthing or Olympic-level flirting, she remains a total boss at all times.

Huppert is - and I'd like to be serious for a second - suppert duppert. These roles just don't exist for women in Hollywood. The entire film is hung on her enormously complex and charismatic performance. Michele's response to her assault is as blasé as they come (a Gallic shrug, a glass of wine and a blood-stained bubble bath) and she remains unmoved in the face of violence, infidelity, betrayal and even death. Verhoeven paints a portrait of a woman from whom society is continually trying to relinquish control. That he does so on such a broad canvas is occasionally to the film's detriment; there is enough story here to service a whole fleet of badass women, but Huppert is equal to the misery that Verhoeven piles on, soaking it up like a sponge. 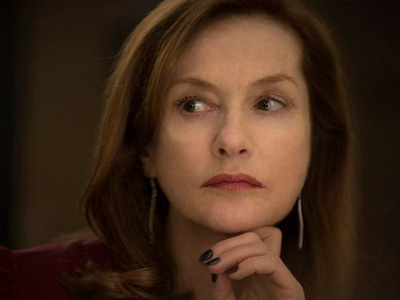 
It's a challenging film for sure. Verhoeven and Huppert dare you to dislike Michele, but Elle's blackly comic sensibilities keep you onside. Maybe it's okay for a film to have a lead character with questionable morals. Maybe one cocked eyebrow from a give-a-fuck Huppert is worth a thousand sanitised Nicole Kidman performances. A fascinating yet flawed study of modern feminism, it is impossible to imagine any other country in the world than France producing Elle, and anyone other than Isabelle Huppert and Paul Verhoeven doing it justice. I really must get around to watching RoboCop one day.

More:  Elle  Paul Verhoeven  Isabelle Huppert  Drama
Follow us on Twitter @The_Shiznit for more fun features, film reviews and occasional commentary on what the best type of crisps are.
We are using Patreon to cover our hosting fees. So please consider chucking a few digital pennies our way by clicking on this link. Thanks!