Endeavour: or, as pretty much no one except me is calling it, Rise of the Inspector of the Morses. Yes, I know it was on over a week ago, but I only just watched it last night on ITV Player. All the kids are watching on demand these days. Get with it, granddad.

The standout among these and the main one I could usually sit through was always Inspector Morse, the last of the great cerebral, non-fighty coppers. He solved crimes by listening to opera, drinking bitter and doing crosswords. He was good enough that I even used to read the books. They were all right, insofar as things can be without moving pictures. I filled in the gaps by making little flick-books in the corners of Morse thinking really hard about stuff then punching the air as he found the answer in a W.H. Auden poem. 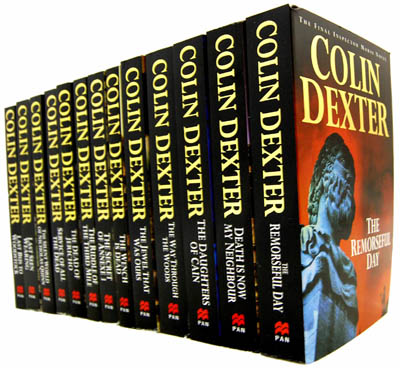 Here they are, these so-called 'books'. If you were blindfold, you'd take them for a DVD boxset on touch alone, and only when you got them home discover the terrible truth.


Morse continued until he was killed off in 2000, whereupon his trusty sidekick Lewis carried on the mantle. Now, call ITV a cheapjack, artless shithouse and send them daily insulting emails that lead to police warnings for harassment if you will, but they know a popular show when they see one, and so last year came the news of a reboot: Morse as a young man.

I'd imagine the six or so regular ITV3 viewers who know how to work the internet were up in arms about it on old-guy messageboards like the Telegraph's (it was probably somehow the EU's fault too), but I was quite keen on the idea. I like to see a character's back-story explored a bit further, as long as it doesn't ruin any mystery that was deliberately planted by the original writers.

And now along comes Endeavour, a one-off ninety-minuter (you get the impression there'll be more if there's demand) starring Shaun Evans as the young Detective Constable Morse in the 1960s, post-army, pre-Lewis, and at a crossroads in his life. He's about to hand in his resignation from the police when he gets packed off to Oxford, his former university stamping ground, to assist on a murder case.

I couldn't figure out where I'd seen Shaun Evans before. A Google search reminded me he was the gay scouse French teacher John-Paul in the briefly glorious Channel 4 show Teachers. (While we're at it, I recommend checking him out in Boy A, the 2007 TV movie in which Andrew Garfield is trying to re-enter society with a new identity after committing a murder as a child.) The worry was that he'd over-Morse the whole thing, of course, but far from it: Evans, who said in interviews he'd never watched the original much, turns in a quietly skilful performance as a young man who hasn't found his feet yet. Where the fashion is to portray the great loner detectives as borderline autistic, here we have instead a slight naivety, with signs of that famous single-mindedness creeping through as the case develops. 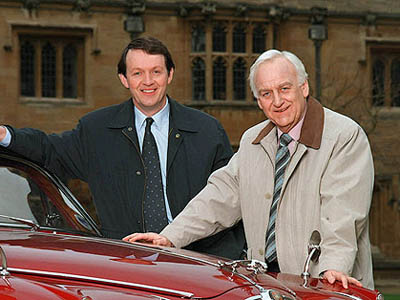 Morse and Lewis in happier times, when they used to meet every Sunday to lean on car bonnets, compare C&A coats and grin like mugs.


As we proceed through the case Morse's thirst for the puzzle is obvious, and the familiar traits are alluded to: the opera and crosswords are there already, and we see him pressured into his first pint of bitter (Evans gives an approving, surprised nod to it like he's in an IPA advert) and driving a Jaguar for the first time, obviously enjoying it. We need these things as an anchor to the future, otherwise it's just another detective story.

And on its own merits, it's a good one: as with the original series, he doesn't do much to solve the case other than ask people questions and read books, and this is how it should be. The standard twist at the end wrong-footed me completely, and the character's teased out just enough to make you want to see a bit more of his early police career. Other than a pretty lame final scene where Evans looks in his rear-view mirror and sees John Thaw as the familiar soundtrack pipes up, it's a successful reboot that side-steps the heavy-handed, overly reverent approach it might have taken.

ReMorse, you might say. If that pun made sense.

More:  Endeavour  Inspector Morse  Shaun Evans  ITV
Follow us on Twitter @The_Shiznit for more fun features, film reviews and occasional commentary on what the best type of crisps are.
We are using Patreon to cover our hosting fees. So please consider chucking a few digital pennies our way by clicking on this link. Thanks!