Let's start the funeral march for Entourage. Should be a pretty star-studded one if nothing else. I just hope Gary Busey doesn't knock over the coffin.


Seems to me that Entourage is truly running its course at about the right time. It's a show I've always got a big kick out of: it's funny and peppered with OMG-I-can't-believe-he-did-that cameos from big names, and it's always been smart enough not to try and amp up the drama too much. These are, after all, rich, privileged characters who only just hover on the right side of sympathetic, and too hard an attempt to try and convince its audience that they're experiencing a life-changing crisis is going to be a tough sell. Your girlfriend's leaving you? Fuck you, you're rich.

But that's the route they're trying to steer it down now. It's continuing the arc of the season seven finale's unconvincing sudden coke addiction and rehab check-in and has stumbled into season eight on its flimsy coat-tails with Vince now 'clean' and back in business. 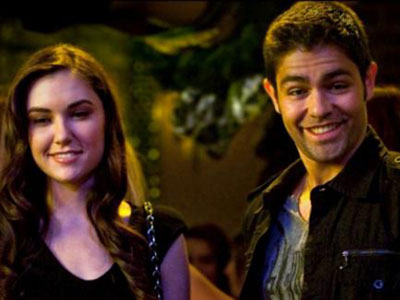 There was some hope in the first episode that it would prove to be a big switcheroo: Vince appeared to acknowledge that he only went to rehab to get out of going to jail, which would've been realistic and in-keeping with both his character and the fly-by-night nature of his 'addiction'. But three episodes in and he's still going to meetings, talking in AA-speak and being frustratingly pious about it.

Everyone else has to have their final arc too, with a neat little conflict for every character to resolve before they hit the series finale. Will Drama finally hit it big with Billy Walsh's cartoon or Vince's TV movie? Will Ari manage to claw his way out of divorce? Will Turtle prove himself as an independent businessman? Will E get back together with Sloan? It's what's known in the trade as 'The Lord of the Rings Multiple-Ending Ending'. (Though obviously it isn't, because 'the trade' would've called it something much more pithy.) 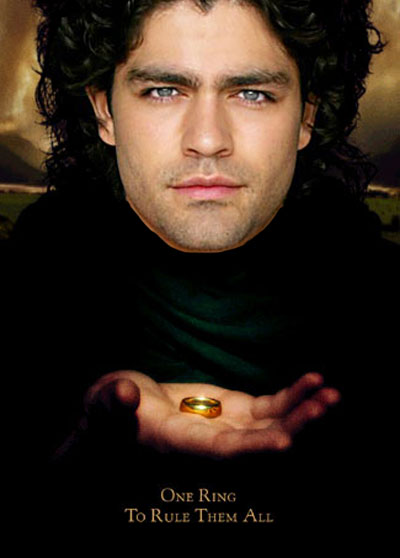 Actually, it's not as if 'the trade' gets together and has meetings about this stuff, is it? I'm sticking with it. Up yours, 'the trade'!

The most jarring of these is the last: the buffers-hitting of E's relationship with Sloan. After six will-they-won't-they seasons (think Ross and Rachel, then stop caring about Ross and Rachel. You're there) they finally got engaged and spent the seventh all loved up. Then jump forward a few months to the season eight premiere and WAIT! They've split up! Any chance you could tell us why? No? Oh, OK then.

And that's the arc. E must win her back. Shouldn't think they'll bother with any kind of pivotal scene to accomplish this: she'll just flit in and out of episodes until they end up together again.

It's still funny though. What Entourage has always been great at is accurately portraying male friendship. They don't have a lot of "I love you, man" moments and they don't talk about their feelings all that much. They generally just take the piss out of each other, brag about sexual conquests and call each other things in jest that anyone outside their group would find hugely insulting. That, ladies, is pretty much exactly how we roll. (Uh ... except for the sexual conquests thing – we never do that.) This dynamic is still there, and the show will never dip below the quality line as long as it is. 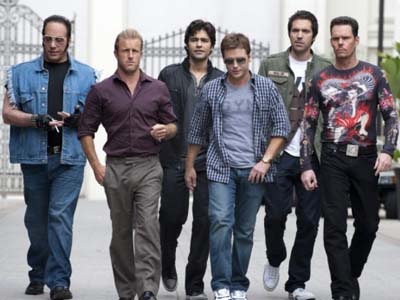 I've realised over the Google image searches I've done that these guys spend a LOT of time walking to places in a line. Don't they have cars?

Another plus is Ari's fight to win his wife back, largely because Jeremy Piven is by far the best actor on the show. He's so long been the amped-up master of the universe and you can see how much more challenging it is for Piven now having to play humble all of a sudden. A scene in episode 3 where he takes a much younger girl out on a date and realises that he can't rule every world he sets foot in is a treat to watch.

I like to see a good show end at the right time. The Sopranos did it, The Wire did it, and it looks like House is going to do it too. It's too easy to keep going with a trusted formula for too long when it's still making money, but it takes some creative chops to cut the purse-strings and wave goodbye when you know it's time to. That's exactly what Entouraqe is doing – it's only got five episodes left, and if it sticks to the heart of what the show's always been about and doesn't overplay the big character arcs, it'll leave a pretty nice-looking corpse.

More:  Entourage  HBO  Sky Atlantic  Adrian Grenier  Jeremy Piven  Andrew Dice Clay
Follow us on Twitter @The_Shiznit for more fun features, film reviews and occasional commentary on what the best type of crisps are.
We are using Patreon to cover our hosting fees. So please consider chucking a few digital pennies our way by clicking on this link. Thanks!