If Will Ferrell isn’t careful, people will start mistaking him for one of those proper actors. On his IMDb filmography, nestled between comedies inevitably starring John C. Reilly, you’ll find the likes of Melinda & Melinda and Stranger than Fiction. Proof, that when not running around in his pants screaming and shouting and generally being a bit much, the guy can do serious.


In his latest ‘dramedy’, he’s a jobless booze hound living in his garden, cooking on a George Foreman, pissing in his pond, showering with a hose and making friends with Notorious B.I.G’s kid. It’s not as hilarious as it might sound...

Meet Nick Halsey (Ferrell), a corporate salesman battling with alcoholism, who, on the day he loses his job, comes home to discover his wife has left him; she’s changed the locks, dumped his belongings on the front lawn and cancelled his credit cards. But after he’s kicked back on his Lazyboy, cracked open a beer and gathered his thoughts, he decides to sell his stuff, start over, get his life back on track, befriend the lovely neighbours and no doubt learn some valuable life lessons along the way. See, not as funny as it first sounds, is it? 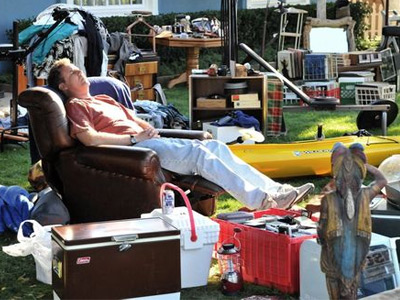 But what if it rains?

We can add this film - based on the short story, ‘Why Don’t You Dance?’ by Raymond Carver - to that long list of typically quirky, low-key, Middle-American, slow-paced Little Miss Sunshine-type comedy dramas with a subtle undercurrent of darkness to them. Don’t let that up-beat acoustic guitar soundtrack fool you.

At its heart, Everything Must Go is about coping with loneliness, with various complex characters all dealing with their own problems. Nick makes a valid point when speaking to his new pregnant neighbour (Rebecca Hall) that just because he’s living in his garden he’s no different to anyone else on the street.

But with only a fleeting mention of what got Nick into this mess in the first place – getting tanked up on a business trip and banging another woman seems the extent of it – first-time director Dan Rush leaves much of Nick’s shady past to our imaginations and focuses more on the now. A brave move that doesn’t demonise Nick and keeps him well on side with the audience, even when there’s a brief mutter of sexual harassment. 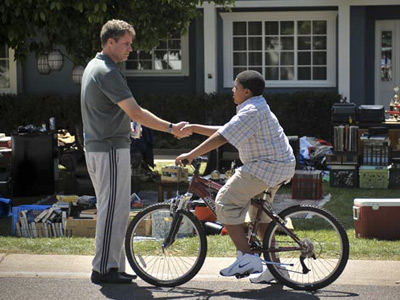 Not to detract from the wonderful Rebecca Hall, Laura Dern (who doesn’t even talk about dinosaurs) and Christopher Jordan ‘Biggie Smalls’ Wallace, but this is a one-man show all the way. This couldn’t be any further away from Ron Burgundy and it’s a refreshing change of pace for Ferrell. His character doesn’t want sympathy, he doesn’t question why his wife’s done this - he just has a beer, man’s up, and gets on with it. Ferrell gives perhaps the most low-key performance of his career.

But let’s not get too carried away. Next up, Will Ferrell will have a funny, borderline racist Mexican accent in Casa de mi Padre. And with that, the comedy balance will once again be restored. Let’s hope he runs around in his pants too.

More:  Will Ferrell  Dan Rush  Everything Must Go  Rebecca Hall  Alcoholic
Follow us on Twitter @The_Shiznit for more fun features, film reviews and occasional commentary on what the best type of crisps are.
We are using Patreon to cover our hosting fees. So please consider chucking a few digital pennies our way by clicking on this link. Thanks!