Is there a task more thankless in Hollywood than remaking a film already beloved by millions? Particularly a horror film, which attracts more bloodthirsty obsessive fans than, say, your average 80s dance movie. Stray too far from the original template and you'll be lambasted for leaving out favourite moments, but stick too closely to the formula and you'll be criticised for lacking creativity. Against all odds, however, this seemingly cynical return to the cabin in the woods is one of the best horror remakes in recent years. Perhaps because, above all else, it makes one goal a priority: to be as FUCKING HORRIFYING as possible.


Of course, it's not technically a remake. Technically, it's sequel. Which is a bit like saying that the second slice of toast I had for breakfast this morning was technically my lunch. Just because the events occur at a later time chronologically doesn't mean that they're not still... made from the same ingredients? There's a chance that I can't make this analogy completely work but the point is that this film's biggest downfall is its strict adherence to depicting the same story and scenes as the original. It's a shame because, in every other area, it is wonderfully creative and sadistically imaginative. (*Has third slice of toast*)

And so the set-up is the same: five friends head out to a wood cabin in a deserted forest and, after coming across the Book Of The Dead, they unwittingly release evil demonic spirits that play havoc with their souls and flesh. The difference here is that we are given some semblance of back story other than just 'they want to have sex and fun'. Mia (Jane Levy) is a drug addict who has brought her friends and estranged brother David (Shiloh Fernandez) together to help her go cold turkey. It's a neat conceit that allows Mia's initial erratic behaviour to be misconstrued as her jonesing for another toot on the smack needle. As I imagine the kids call it. 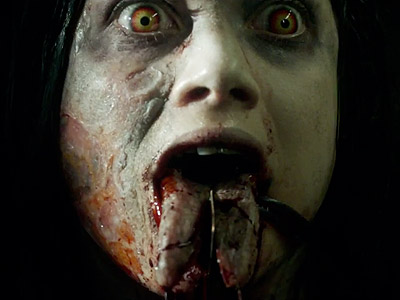 She's probably fine. I'm sure she just really misses those drugs she was taking.


At least, it would be a neat conceit if the whole idea wasn't abandoned as soon as the viscera start flying. As such, it almost seems pointless to provide this context (even though, it has to be said, the exposition is delivered particularly well). For example, we get a scene in which it is established that David was 'too busy' to visit his and sister Mia's dying mother, and Mia isn’t happy about that. But this is something that is never mentioned again and has no bearing on the events that follow, making it clear that the film is just struggling to satisfy the intelligence of modern audiences before descending into the senseless horror of the original Evil Dead.

Thankfully, once that senseless horror begins, the film delivers an impressive display of stunning and inventive practical effects. Eschewing the usual CGI tricks that often result in empty, schlock scares, this movie utilises incredible make-up and props to make every ripped muscle and sliced sinew feel real. Likewise, Jane Levy’s performance as a doe-eyed druggie possessed by a wicked demon from hell holds the film together, with just the slightest sense of impishness allowing for some delightfully cheeky moments of pure, repellent malevolence. 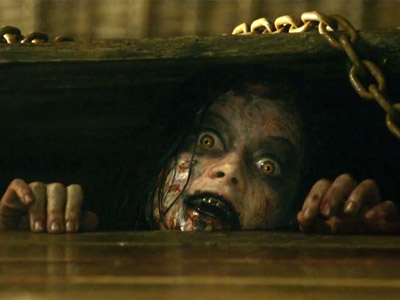 I probably still would.


And it is this occasional sense of fun that proves most impressive in this film, which otherwise completely shuns Raimi’s camp comedy moments to tell a straight-faced tale of terror. Director Fede Alvarez displays a mean streak of mischief in presenting this much guts and gore while still finding time to include subtle nods to each film in the original trilogy. And, what the film lacks in slapstick, it more than makes up for in over-the-top gruesomeness, which keeps piling on until we get to the bloodiest ending since Braindead took a lawnmower to a legion of zombies.

All in all, the only flaws to be found in the film are those that would be present in any 80s horror remake. Dumb character moments like 'good friend' Eric reciting from a terrifying book that screams "Do Not Read Aloud" may have been acceptable 30 years ago, but now it is just teeth-grittingly stupid. And cabins in the woods? Don't make me laugh. Oh wait, you already have. If it wasn’t for these tropes preventing the film from breaking any new ground, this could easily have been the best demon possession film released in decades. Instead it is just a very effective, still terrifying, evil retread.

More:  Evil Dead  Fede Alvarez  Jane Levy  Shiloh Fernandez  Lou Taylor Pucci
Follow us on Twitter @The_Shiznit for more fun features, film reviews and occasional commentary on what the best type of crisps are.
We are using Patreon to cover our hosting fees. So please consider chucking a few digital pennies our way by clicking on this link. Thanks!