September 11th, 2001. Pretty bad day, overall. But ten years on, 9/11 is beginning to take its place alongside the Vietnam War in inspiring a genre of American cinema in its own right, and the story of how the day unfolded and its aftermath resonated is taking shape through filmmakers' eyes. The wounds are still raw, but while there might have been cries of "Too soon!" when Oliver Stone and Paul Greengrass released World Trade Center and United 93 respectively in 2006, in relative terms these guys waited longer than Coppola did before Apocalypse Now. Stephen Daldry's Extremely Loud & Incredibly Close couldn't be accused of insensitivity: it's the first film I've seen to treat 9/11 as a historical event and look at the loss suffered in retrospect, rather than put you right in the middle of the clouds of debris or a doomed aeroplane.

There's a lot to be said for this approach. Most of Vietnam cinema's most powerful scenes come from brutally depicting the horrors of war, but the key difference is that these films were being watched by people who weren't there, man; they were reporting the events as new information. I've seen 9/11, though. We all have. I watched it all day on Sky News, and I've seen countless documentaries and news spots on it. I've watched the planes hit the towers from every angle, I've seen the smoking hole in the ground in Pennsylvania and I've seen the rubble where what was REALLY OBVIOUSLY NOT a plane hit the side of the Pentagon.

So a film showing me the whole thing again, only with Nicolas Cage running up a bunch of stairs? Seen the real thing, thanks: I'll just go on YouTube if I need my memory jogging. 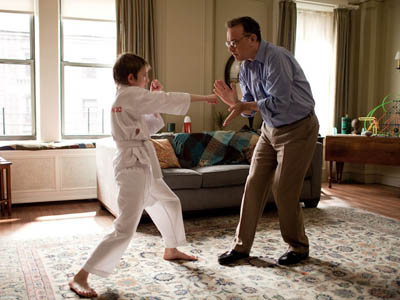 Horn and Hanks doing their motion-capture scenes for the beat-em-up video game tie-in.

What's left to show is the people who lost friends and family that day, and how they – and New York City itself – coped with that loss over the years to come. Extremely Loud & Incredibly Close, now in receipt of an Oscar nomination for Best Picture, attempts to do this through the eyes of a child who now finds himself without a father, and whose journey around the city and its inhabitants a year after the attacks lets him, and us, understand a little more what this kind of sudden loss is all about.

The boy is Oskar Schell (Thomas Horn), who seems to have mild autistic tendencies – the tests were inconclusive, we're told – about which his father Thomas (Tom Hanks) won't allow him to feel disadvantaged. He wants his son to live in a world of wonder and imagination, sending him off on treasure hunts and encouraging his creativity. On 9/11 Schell the elder heads off for a meeting at the World Trade Center, which works out about as well for him as you'd imagine, and Oskar and his mother (Sandra Bullock) are left alone. A year later Oskar is digging through his dad's things when he finds a key in a small envelope with the word 'Black' on it. He devises a plan to visit everyone in Manhattan with that surname until he finds the lock to fit it.

We have to leave aside our doubts about how plausible Oskar's whole endeavour is if we're to engage with the story on any real level, but this is easy enough. He takes as read that the word 'Black' refers to a name, for example, when it could mean anything – maybe his dad was just a massive racist? – and so we have to do the same if we're to believe he will ever succeed, but Horn plays it just far enough the right side of autistic to convince us it's what Oskar would do. 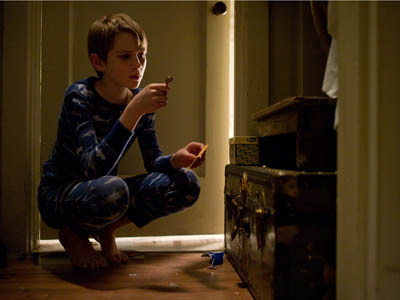 We progress with Oskar through New York, meeting various people called Black with their own stories, and it's in these scenes where Daldry (British, but New York-based) shows his affection for the city and its people. You get the sense of a city spilling over with life and diversity, but also a community still living in the shadow of the Twin Towers and sympathetic to anyone else touched by 9/11. If some kid turned up at my door chuntering on about a key I'd tell him to pound sand, but once he mentions his father these people are all ears. You believe it, too.

Where it gets a bit flabby is in its middle section, in which Oskar teams up on his search temporarily with Max von Sydow as 'The Renter', a mysterious old man who rents Oskar's grandmother's spare room. The Renter doesn't talk, a result of a wartime trauma, and instead writes everything down on a pad.

He also has 'Yes' and 'No' tattooed on the palms of his hands so he can hold one up to easily accept or refuse something. Presumably it didn't occur to him that you can actually convey both of these responses quite effectively through nodding or shaking your head, so this represents a missed tattooing opportunity to quickly convey greater nuance. I'd have gone for 'Yeah OK, but just give me a minute first' and 'A three-piece Variety Meal, please'. But as interesting as the character is, in narrative terms there's no real need for him to be there, and he quickly disappears, leaving Oskar to pick up the search again on his own, and us wondering why he bothered showing up in the first place. 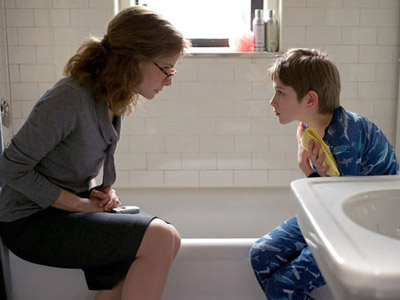 Rule one in the handbook for dealing with an autistic child: intense stare-out contests whenever practical.

This is Extremely Loud's main flaw: it misuses some great actors. von Sydow's performance was sufficient to earn him a Supporting Actor nomination for the Oscars, but you can't quite shake the feeling that this was largely down to his muteness proving a showy enough gimmick for the Academy; an extension of the 'don't go full retard' rule. Within the context of the story as a whole, you could remove the character entirely and lose very little.

Of its male and female adult leads (with three Best Actor wins between them, remember) Hanks is used just about well enough, with constant flashbacks giving the character enough screen time to justify having him there, but Sandra Bullock is more or less absent throughout the majority of the film. She does a terrific job with what she's given to do in the final reel, but other than that it's hard to see why an actor of her stature was needed given the size of the role. This also causes problems in terms of our sympathy for Oskar, who has basically sodded off on a treasure hunt leaving his bereaved mother at home when she clearly needs him around.

So it's a strange nod for Best Picture, this. Yes, Daldry deserves a lot of credit for his direction, which skilfully shows you New York as Oskar sees it, in particular making well-judged use of sound to emphasise when he's out of his comfort zone. And Thomas Horn is excellent too, pitching it just right in a story that hinges on his performance. Overall, though, it's a sweet little love letter to New York and a reminder that the city still grieves for its lost, but Best Picture? Not even (incredibly) close.

More:  Extremely Loud And Incredibly Close  Stephen Daldry  Tom Hanks  Sandra Bullock  Max Von Sydow
Follow us on Twitter @The_Shiznit for more fun features, film reviews and occasional commentary on what the best type of crisps are.
We are using Patreon to cover our hosting fees. So please consider chucking a few digital pennies our way by clicking on this link. Thanks!