Falling Skies – season one, episodes 1 and 2

An dinosaur show AND an alien show? What, is Spielberg just getting people to remake all his films for TV and picking up a cheque for it? What's next, a Schindler's List game show? (*double-checks whether Matt made essentially the same joke when he posted the trailer*) Oh.


Ever since TV officially became awesome after years of everyone reckoning it was shit (scientists have shown that this was at the exact point that Rob Lowe uttered the last line of The West Wing pilot's cold opening), the shows that have grabbed the plaudits have been dialogue-and-character-based straight dramas. The kind of stories that best suit the medium, you could say.

There's been no room for big, effects-led drama so far. Mainly because of budgets, you'd guess, but also because of their narrative disposition: there's a lot of action in them, which TV directors aren't necessarily used to shooting or staging, and people get killed in them a lot. You can't kill people off every episode: it just doesn't work.

But there's been a trend over the last couple of years in which people take what seem like ideas suitable only for a movie and turn them into TV. When someone first told me I should watch Breaking Bad and explained its central premise (science teacher suffering terminal cancer decides to cook crystal meth to provide for his family after his death but gets sucked into the criminal underworld), I said it sounded like a good film but I couldn't see how you'd stretch out such a finite plot into a TV show. That's pretty much as wrong as I've ever been.

It's a trend that continued with The Walking Dead, a post-zombie-apocalypse show that seemingly had just as short a shelf-life, where main characters do get killed and we just have to deal with it. 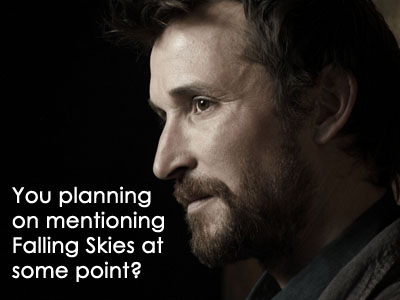 So Falling Skies, while just as high-concept as its zombie cousin, is more groundbreaking: it's effects-heavy, and I'd imagine really expensive: risky, given the high concept in question, which is that of the survivors of an alien invasion of Earth and how they mobilise their resistance. Noah Wyle is Tom Mason, a professor whose knowledge of military history (and, as it turns out, his mad skillz with guns) are his only weapons as the second-in-command of the Boston chapter of this movement.

Obviously he's looking for his son too. Who isn't, in a post-apocalyptic story? Except for Andrew Lincoln in The Walking Dead, who found his after about half an hour.

The aliens themselves ('skitters', as the survivors have called them) are impressively rendered in CGI: they have robotic suits like more mobile versions of Walkers from Star Wars, with motion-sensors and dirty great big laser guns. An ominous, District 9-style mothership hangs silently over Boston at all times, and small limpet-type-things are attached to children as spinal implants to enslave them.

When out of their suits, the aliens are perhaps the most disappointing things in terms of design: humanoid with mandibles and the odd tentacle. In 60 years or so of showing them on screen, hasn't anyone come up with a better idea for an alien than a green octopus-lobster? 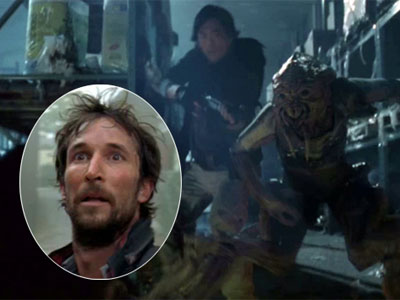 Sensibly though, Falling Skies focuses mainly on its characters. The most interesting idea about a post-apocalyptic scenario is how the surviving humans would organise themselves; whether some would naturally gravitate towards leadership and so forth.

In The Walking Dead this is fairly ad hoc: we seem to be seeing one of only a handful of small groups and they basically just muddle through, but here it's implied that around 10% of the human race has survived. That leaves a lot of scope for observing how a society in microcosm might develop without much of the technology it's become used to, and how its inhabitants will cling to their former values. There's a character who still believes that the aliens are all part of God's plan, for example, and she's roundly treated as a loon.

I find a lot to like about Falling Skies. I think it has more scope for longevity than The Walking Dead does, and I think its effects are excellent and backed up by the scope for some really interesting character development. No one character particularly stands out, but it's the collective that could prove the key to this: how a society reorganises and rebuilds itself in the face of its destruction is going to be interesting to watch, whether or not aliens keep getting shot in the face.

They should probably shoot at least two per episode just to keep me interested, though. I've got Independence Day on DVD so I could jump ship at any time.

More:  Falling Skies  Steven Spielberg  Noah Wyle  FX  TNT
Follow us on Twitter @The_Shiznit for more fun features, film reviews and occasional commentary on what the best type of crisps are.
We are using Patreon to cover our hosting fees. So please consider chucking a few digital pennies our way by clicking on this link. Thanks!