If you've never seen a Fast & Furious movie, Vin Diesel and Paul Walker play two alpha males who wish they could have energetic bum sex with one another, but have to settle for driving around big shiny penis extensions instead. Over five homoerotic odysseys, they've recruited various friends from around the world into their gang, all of whom perform one specific function, whether it be 'tech', 'comic relief' or 'looking hot'. In Fast & Furious 6, they team up with chief Fast Five antagonist Dwayne 'The Rock' Johnson to hunt down Luke 'The Crow' Evans, an evil man who needs a computer chip to do evil things and who doesn't care how many cars he has to flip over to get it. There, you're up to speed – and that speed just happens to be TWO HUNDRED MILES PER HOUR.


Even with a spotty viewing history of the Fast & Furious franchise, I have no problem proclaiming Fast & Furious 6 to be the most ridiculous entry in the series to date. In the credits, a notice flashes up warning audience members not to duplicate the stunts they've seen at home. I think it's safe to say you could wreck 100 cars and waste 100 lifetimes and not even come close to replicating the dubious physics on display here. Fast & Furious 6 is a movie where cars aren't just driven, they're flown like planes, aimed like bullets, ridden like surfboards – and there's always another one nearby handy if you need to hop off.

This is what happens when you try that in real life.


This is, of course, to be expected: you don't go to see a Fast & Furious movie expecting to see something leisurely and agreeable. The action sequences are uniformly excellent and immaculately choreographed, although Justin Lin does edit the chase scenes with a touch too much haste and fury and there's the sneaking suspicion that, actually, all cars basically look exactly the same at 200mph. The stunts are massive and the carnage is admirable, it's just that everything else in between is interminable: endless speeches about family, who we are, what we do, and so on and so on. Fast & Furious 6 has assembled a cast roster so large, it needs around half of its 130 minute run-time just to introduce all of its characters and get the engine warmed up.

Fast & Furious is essentially a franchise about things hitting other things: sometimes cars collide with cars, sometimes people hit people, often both of these things at once. The numerous fight scenes plug the gaps between the chases and the big money stunts, and for the most part they have the requisite oomph: Gina Carano is a nice addition in this respect, while Diesel and The Rock enjoy their fair share of fisticuffs. If you squint, one fight near the end of the movie, featuring both men and a flesh-covered hulk of a bad guy, resembles hanging hunks of beef slamming into one another in the back of a refrigerated truck. There are clothes lines and body-slams and flying headbutts, and there's no post-credits scene in which Vin Diesel asks for an aspirin. Not in this franchise, sweetheart. 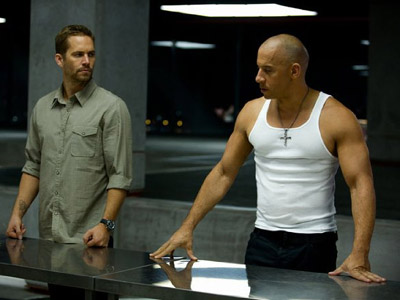 "I wouldn't say no to a glass of water, though."


Naturally this means that dialogue is not the movie's strong point. Forget Luke Evans' devious criminal enterprises – the spoken word is the enemy in this movie. Every time Vin Diesel opens his mouth, a clunker falls out, and his dialogue is sadly rendered laughable thanks to a gruff baritone that now closely resembles that of Cookie Monster. In trying to give the stunts added significance, the scenes inbetween feature lines that aim for profundity but pop off the page like trite sixth form philosophy. "When you walk out that door, so do words like 'amnesty' and 'pardon'" threatens Johnson's cop; "Those words were gone the day we were born," comes Diesel's reply, punctuated by a look that suggests he's just now heard that out loud for the first time.

There's a sneaking suspicion that screenwriter Chris Morgan has just duplicated parts of his script to hit the word count – that'd explain the repetition of the only jokes in the movie (the size of Tyrese Gibson's forehead, the oiliness of The Rock's biceps) and the incessant droning on about this place and that place feeling like home, or not feeling like home, or oh god just get in a car and ram something, would you? 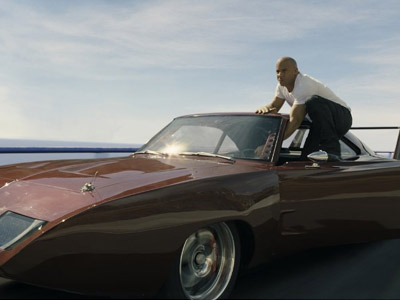 Seriously though, don't try this at home. You'll definitely die.


There are high points. Luke Evans' villain Owen Shaw is hardly a bad guy for the ages but he gives it a good shot, channelling no small amount of menace into a sturdy physical presence. The Rock can still lighten the mood with a slightly raised eyebrow. The final showdown, on the world's longest runway, is a glorious spectacle of destruction, one that would have been infinitely improved had its coup de grace not been included in the trailer.

Regardless, this is still a movie with dumb fuelling the engine. Characters in a foreign land take up street races on the spur of the moment and magically learn all of the local terrain on the fly. Mid-chase, extra speed can be gained by characters jamming their foot on the accelerator dramatically, begging the question why they weren't already doing so. Characters perform monstrously stupid feats of daring, like jumping from a moving car off a bridge ONTO ANOTHER MOVING CAR, only to have them revealed as astonishingly pointless seconds later. This is a movie in which Tyrese Gibson is the comic relief.

This is Fast & Furious 6 and you suspect its fans wouldn't have it any other way. The idiots.

More:  Fast And Furious  Fast And Furious 6  Justin Lin  Vin Diesel  Paul Walker  Dwayne Johnson  Michelle Rodriguez  Luke Evans  Tyrese Gibson  Sung Kang
Follow us on Twitter @The_Shiznit for more fun features, film reviews and occasional commentary on what the best type of crisps are.
We are using Patreon to cover our hosting fees. So please consider chucking a few digital pennies our way by clicking on this link. Thanks!