For the first time since its inception in 2001, the Fast & Furious franchise was forced to hit the brakes. The unfortunate – but avoidable – death of Paul Walker in an automobile accident in November 2013 meant production on Part 7 skidded to a halt. Now, one year on from its planned release, Furious 7 rides into town after a respectful re-pimping – the muted colours on the poster suggests a star-studded funeral procession, but in actual fact, the latest instalment of The Franchise That Couldn't Slow Down is business as usual: cars, explosions, pecs (men), gussets (women), crap jokes and the most flagrant disrespect for physics since Sir Isaac Newton's naysayers suggested he stick his apple up his arse. You wouldn't call it a fitting tribute to Walker – I'm pretty sure the last thing his family needs to see is 250 cars exploding into fireballs – but you suspect it's what he, the fans and the studio would have wanted. So here we are. Amber turned to green. Let's go.


Here's a capsule plot review of Fast & Furious 7. The Transporter killed one of Riddick's friends because they tried to kill his brother, Bard the Bowman; now, alongside comrades Ludacris, Comic Relief Black Guy, Ana Lucia from Lost and Brick Mansions, Riddick has to keep his 'family' safe with a little help from The Rock and Snake Plissken (who works for the government now), while facing off against Korath the Pursuer and his henchman Ong-Bak, who are trying to steal the sonar device from The Dark Knight, which is relevant because no one is paying attention by this point. Up to speed?

It's an unpopular opinion, one that'd likely see me drawn and quartered between the grills of four American muscle cars if uttered out loud, but Fast & Furious occasionally needs to take it down a gear. Part 7 is too much in every respect: too busy, too beefy, too many characters, not enough plot to serve them all. It's a movie that fills its overall twerking quota in the first five minutes. It's so butch, that – to paraphrase Charlie Brooker – watching Fast & Furious 7 is like falling face first into a meat sofa. There is an early scene in which Vin Diesel and Jason Statham test each other's manhood by playing a game of car chicken, smashing into each other at maximum velocity in a tunnel – it's the Large Hardon Collider. The rest of the film isn't much more complex than that and explores few other avenues other than what happens when brute force is equalled by blunt trauma. 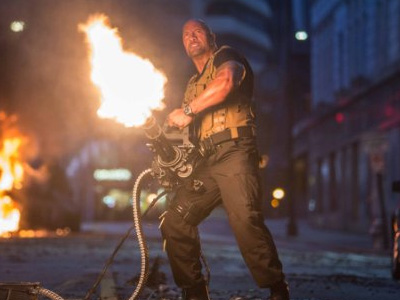 I tried to find a picture where The Rock didn't have a gun for a dick, but there aren't any.


The plot shows the scars of excessive – and understandably necessary – rewrites, because it's a movie following its own tail. Diesel and his crew are hunting Statham's villain – or is he hunting them? – but despite sharing the simple of goal of mutual destruction, particle A and particle B can never quite seem to stay in the same room for longer than the briefest bout of fisticuffs. Statham's villain is wasted, sidelined by a needless sub-plot about a hot young female hacker and her nonsensical technological Macguffin. There's a hint of The Joker about Deckard Shaw – like Heath Ledger's clown, he destroys a hospital for no reason and crashes a party in a skyscraper only to escape off screen – but the character lacks the required anarchy to make him feel unpredictable, settling instead for the gruff Statham Terminator archetype; a man who can't be killed even when a car park falls on him. Call it a tad insensitive, but for the stakes to feel truly high, Furious 7 is a movie in which a few more people needed to die.

Thankfully, director James Wan – a horror director neatly seguing into the artless commerce of car commercials writ large – maxes out the movie's stunt budget, moving the franchise firmly into the fantasy category with a series of action sequences that genuinely boggle the mind and quicken the pulse. Only a film like Furious 7 could feature a scene in which cars are dropped out of a plane FOR REAL but not have it be the first or even second most exciting stunt in the movie. We've reached peak Furious at this point, culminating in a spectacular skyscraper plunge that leaves skidmarks on the rest of popular culture, smashing the shit out of some nearby Terracotta Warriors just because they got in the way. FUCK YOU, ANCIENT CHINA. 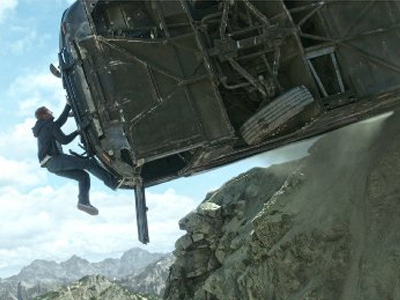 One of the quieter days on the Furious 7 set.


Furious 7 is essentially a procession of hilarious bits, which – true to form – are not always intentional. There's the superliminal product placement for Corona, in a scene where Kurt Russell literally produces an ice-cold bucket out of nowhere. There's Iggy Azalea's cringeworthy cameo in a role billed as 'Female Racer' at a driving event called 'Race Wars'. There's the moment Dwayne Johnson flexes his arm free of a plastercast (because as we all know, The Rock beats scissors). Finally, wonderfully, if you'll permit me a spoiler, [highlight to reveal] *there's the priceless flashback during a highly emotional scene in which it's revealed that Vin Diesel's character Dom got married wearing the same white vest he wears when he's doing up his motors. (You wouldn't be surprised if we panned out to see his Best Man was a carburettor)*. It's for these reasons and more that you can't stop watching: even when Furious 7 gets it wrong, it feels so right.

The final 20 of the movie's 137 minutes will probably play to an exhausted and indifferent audience, with at least four different story threads involving cars, drones, choppers and hacking all unfolding simultaneously – you begin to feel a little like Jason Statham as he's battered relentlessly by Vin Diesel with a steel pole. But then comes the finale, the protracted send-off for Paul Walker's character, which doubles as a well-handled and sensitive goodbye to Walker himself. As the movie's last image, a rare artful shot of composed subtlety, fades upwards into a grey sky turned blue, it's impossible not to be moved by the sincerity of it; though achieved through tragic circumstances, Furious 7 is the first movie in the franchise where the constant platitudes about love and family and brotherhood being important above all else finally rings true.

More:  Fast And Furious  Fast And Furious 7  Vin Diesel  Paul Walker  The Rock  Kurt Russell
Follow us on Twitter @The_Shiznit for more fun features, film reviews and occasional commentary on what the best type of crisps are.
We are using Patreon to cover our hosting fees. So please consider chucking a few digital pennies our way by clicking on this link. Thanks!