The return to numerics in the title suggests that the makers of Final Destination 5 know exactly what they have: a cash cow that can be cloned and milked repeatedly without the product going sour. Unlike the Saw series, which felt the need to thread an awful, convoluted narrative throughout seven movies, the Final Destination movies have precious little in common, save for token mentions of something like this happening before. It's a very precise formula, which I can reveal to you exclusively.

It should be just as easy to write these reviews as it apparently is to write the movies themselves: copy, paste, change the names, submit. But surprisingly, Final Destination 5 does itself proud where a cookie-cutter sequel would have just as easily done the job.

Take the opening bridge collapse. The set-up is exactly the same - the character intros, the warning signs, the frenzied "Get off the bus/train/road/rollercoaster!" - but the execution (pun intended) is way better than, say, the lame NASCAR crash of the last movie. The movie's inflated budget means the special effects look good - Roland Emmerich good - and the deaths seem a little more imaginative than previous offings. Why just fall off a bridge when you can be impaled as well? 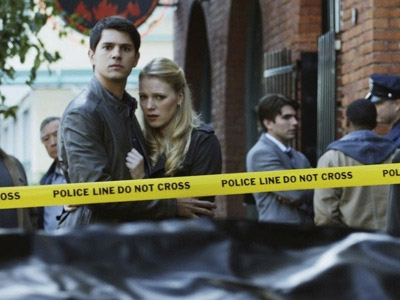 "We should probably cancel our bungee jump, huh?"


Naturally, slower, character-based scenes between the gruesome kill-shots seem to last an eternity, but the moment the lights dim or the candles flicker, it's on. Each one unfolds like a Rube Goldberg machine, unseen cogs plotting and ticking and whirring and conspiring to do as much grievous bodily harm as possible. It's testament to the 2000 original that there's still so much mileage left in the 'death is coming for you' concept 11 years later.

Fivenal Destination has some deadly doozies, too - the gym scene is a nail-biter and the laser eye surgery meltdown is just as pleasant to watch as you might expect. Hooray for 20/20 vision. The cherry on the deathcake is the twist ending - a far more considered and clever denouement than the franchise deserves. Nonsensical? Yes. Cool? Definitely.

The fact that the writers have tried to chest-compress some life into a franchise that could feasibly march on as a zombie for years is heartening, so much so you worry that Final Destination 5 really could be final.

More:  Final Destination 5  Final Destination
Follow us on Twitter @The_Shiznit for more fun features, film reviews and occasional commentary on what the best type of crisps are.
We are using Patreon to cover our hosting fees. So please consider chucking a few digital pennies our way by clicking on this link. Thanks!