I was supposed to write a review for Finding Dory about a month ago, but I, er... forgot. Now, in the spirit of the movie's hopelessly forgetful protagonist, allow me to piece together what I can remember in an attempt to create some coherent thoughts. Please also forgive me if I use the same bullshit excuse when filing my Jason Bourne review in six weeks.


Pixar are at a weird time in their relatively short existence: they've come fresh off a calendar year where they released two new movies, one of which, Inside Out, had the most successful opening weekend ever for an original movie, yet they're still facing accusations that they're becoming creatively stale. Look at their release slate and you can see why: four of the next five movies on the docket are sequels. The jury is still out on Pixar sequels: on one hand, you have the boundless joy of the Toy Story trilogy; on the other hand, Cars 2. I reckon the negative equity of Cars 2 cancels out at least two Toy Story sequels, and I'm coming from the position of someone who has watched it somewhere between 100-200 times and has roughly the same relationship with it that a hostage with Stockholm Syndrome has with their kidnapper. So forgive me if I initially eyed Finding Dory with some suspicion. 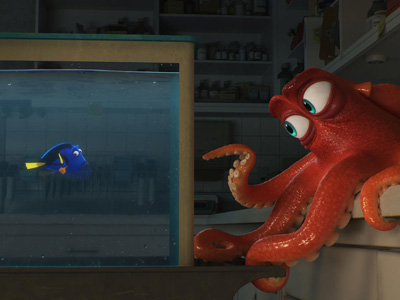 Octopus suckers make my wife feel sick so this one's for her.


On the surface though, this is a sequel that makes sense. Safe, sound and found, Nemo is now a supporting character in his own sequel; Marlin is hardly hero material any more either. Dory, on the other hand, is perfect protagonist material, with swathes of blank pages in her past that make her the ideal subject for her own adventure. So many sequels are victims of their own success but the 'finding [blank]' format works perfectly for Dory, and her short term memory loss was always going to feel like a natural device to plot out an adventure. (It is also an effective way for Andrew Stanton to utilise flashbacks in a satisfying manner, a technique he had to drop in Finding Nemo). So straight out of the gate, Finding Dory's existence is justified. There's no glaring flaw inherent in the set-up that lessens your enjoyment (naming no names, ENTIRELY POINTLESS PREQUEL MONSTERS UNIVERSITY). You could hardly say the same about Jason Bourne's latest adventure.

I did have some issues with how the story unfolded, however. Stanton and the Brain Trust have taken Dory and the gang above sea level: Finding Dory mostly takes place on dry land. Dory remembers that her parents live in the Marine Life Institute in California, so the characters travel the length of the Pacific in one scene to reunite the Blue Tang clan, then when at the MLI the rest of the movie hops from aquarium to coffee pot to mop bucket like it ain't no thang. The decision to take Dory and friends out of their natural environment is a bold one (if only there was some sort of metaphor for this scenario) but it is a maddeningly convoluted way of telling a story. The characters are constantly surrounded by the threat of death and suffocation, but there is no notable sense of danger as Nemo and friends gaily skip across fountains in a water park or make one-in-a-million leaps over hundreds of yards only to plop into conveniently placed fish tanks. It's all a bit safe. 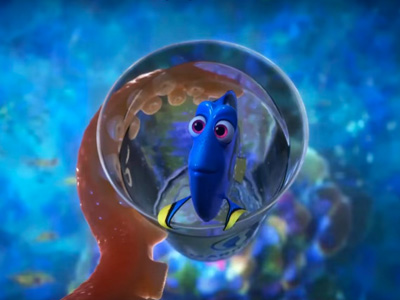 Because this isn't terrifying or claustrophobic at all.


Pixar being Pixar, you forgive and forget such storytelling sins, because the movie is so crammed with character you barely notice them cheating. Dory dispels fears of the secondary character getting bumped up to lead (also known as 'The Mater Principle') and Ellen DeGeneres imbues her with enough fragility and warmth to truly make you care. The new additions are superb: Ed O'Neill is inspired casting as Hank the surly septopus (completely boneless, he's one of the most incredibly animated characters in the studio's history), Modern Family co-star Ty Burrell is a great hire as beluga whale drama queen Bailey (basically Phil Dunphy in whale form), and Always Sunny star Kaitlin Olsen is perfect as Destiny, the short-sighted whale shark (sadly however, we are denied the pleasure of hearing her yell “OH GODDAMMIT” a la Sweet Dee). There is also a big-mouthed talking clam who has his heart broken by a scallop.

Honestly, there's not LOADS more to remember. Finding Dory is a beautiful film: shimmery and sparkly. It's a very sweet film as you'd expect, and the moment Dory reunites with her parents (I'm not tagging that as a spoiler, because come on, honestly) is genuinely lovely. Is it a funny film? Was the first one? I'm not so sure. There are gags which mostly land (there's a great namecheck for Sigourney Weaver), but really all the humour comes from the characters and just how perfectly they're able to communicate with one another. This is something that shouldn't be taken for granted: we're now at a point in the history of animation where animators can tell a joke with a facial expression shared between a fish and a cephalopod. The strength of your script doesn't seem to matter as much when you are operating on that level of technical expertise. Let's just say next year's Cars 3 is going to have to be super fucking shiny to score a pass.

More:  Finding Dory  Andrew Stanton  Ellen DeGeneres  Albert Brooks  Ed ONeill  Ty Burrell  Kaitlin Olson  Pixar
Follow us on Twitter @The_Shiznit for more fun features, film reviews and occasional commentary on what the best type of crisps are.
We are using Patreon to cover our hosting fees. So please consider chucking a few digital pennies our way by clicking on this link. Thanks!