The romantic heist genre (or rom-con, if you will) feels like a pretty well worn sub-genre by this point: the conman, the mark, the honeytrap, the big job, the love that's worth more than diamonds, the poster tagline which insists on telling you whether the con is or isn't on - you know the score. Pierce Brosnan and Rene Russo stole hearts among other things in The Thomas Crown Affair and every pale imitator since has been caught red-handed raiding the same emotional cookie jar (see also and forget immediately: Duplicity, starring Clive Owen and Julia Roberts). Focus sticks to that same formula religiously, but it's a delightful surprise to report that it hoodwinks you into having a great time, distracting you with hot bodies and slick plotting until you realise you've been entertained. Also it stole £13.50 out of your wallet.


The first scene sets us up nicely: Will Smith and Margot Robbie hook up in a bar but before they can enjoy the sexiest intercourse in cinematic history (incidentally the closest Big Willy has ever come to banging a white girl on film) we discover that, as the poster tagline no doubt claimed, the con is on. Robbie's small-time fleecer unwittingly targets Smith's legendary con artist - sort of like a Fagin with better dress-sense - and a tentative partnership begins. 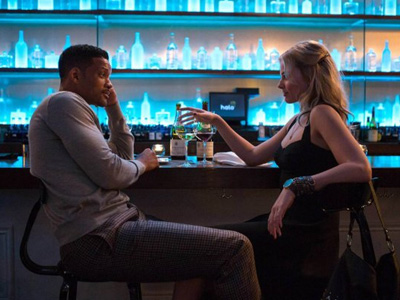 "I'll have another bottle of the blue stuff."


Naturally, this being a rom-con, you can never really relax in anyone's company, because the genre is forever hinting that nothing is as it seems - every new character is a potential trickster, every emotion a possible fake-out, every line a line. It's an exhausting by-product of a worn-out formula, but Focus is defined by great performances by its two leads; Smith and Robbie generate visible heat haze between them, but more importantly, they actually make you invest in the story (and as we're told, you never invest with a conman).

Will Smith is his usual charming self, horizontal with cool and convincing as the kind of career criminal who could rob you blind and still have you thanking him for the privilege. It's Margot Robbie who makes the movie pop, not just with her absurd good looks, but the relaxed manner in which she shares the frame with Mr Box-Office, easily holding her own against a veritable pillar of screen presence. She wisely ices the sexy baby act from The Wolf Of Wall Street with one early exchange ("Can we skip the thinly-veiled allure and promise of an earth-shattering hump down the line?"), instead concentrating on being feisty, funny and baby fawn-level adorable.

Writer-directors Glenn Ficarra and John Requa know the ropes and are adept at playing you like the marks in the movie: it's a film that knows when to hold and when to fold and isn't ashamed of throwing curve balls at red herrings down blind alleys (arguably, the story proper doesn't get started until around 45 minutes in, thanks to a diverting one-scene cameo by BD Wong doing a Ken Jeong impression). 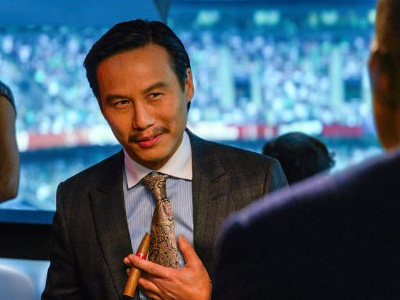 
The script is slick and funny and refreshingly free of poster platitudes for the most part (I only counted one: "Die by the lie!"), and Focus's most memorable scenes are not ones of con-jobs or shock twists but simple exchanges of dialogue. One late scene between Smith and Gerald McRaney's Mike-from-Breaking-Bad-esque henchman Ownes is a show-stopper; an extended rant on the youth of today, their sarcasm ("If you don't like someone's jacket, don't say 'Nice jacket', just say 'Fuck off'") and their constant photography of their sandwiches ("I'm sorry: their paninis", spits McRaney). The fact the diatribe is being levelled at Will Smith, age 46, is clearly not lost on the directors.

There's a slinky, Soderbergh vibe in the DNA here; Focus feels like it's pitched somewhere between Out Of Sight and Ocean's Eleven. To keep that kind of company requires a heck of a lot of charisma in front of the camera and a fair amount of talent behind it, but Crazy Stupid Love directors Ficarra and Requa are equal to the task. There's the usual complement of sunny locales and poolside scenes (plus an abnormal number of bars lit by blue neon), but there's a smarter aesthetic in play too, including several shots that pull out of mirrors, cleverly reflecting the general themes of misdirection. It's exotic without ever feeling like a travelogue (Runner Runner's 'Bacardi ad' depiction of Cuba springs to mind) and it's shiny enough to distract you from the solid narrative groundwork that's being laid before your eyes. Even the seductive soundtrack feels like it's an integral part of the long con.

Though you feel like you're constantly being asked to second guess every minor moment and motivation, Focus does keep its twists to a minimum, and when they do arrive, they mostly come out of left field and they mostly make sense. It's a film that keep you tense and on your toes but also frequently amused and always entertained. It's carefully plotted and beautiful to behold (so many hot bodies) but your enjoyment of a film like this really comes down to whether you'd like to spend time in a room with the two leads, and in the case of Focus, the answer is overwhelmingly 'yes'.

More:  Focus  Will Smith  Margot Robbie  Rodrigo Santoro  Gerald McRaney  BD Wong
Follow us on Twitter @The_Shiznit for more fun features, film reviews and occasional commentary on what the best type of crisps are.
We are using Patreon to cover our hosting fees. So please consider chucking a few digital pennies our way by clicking on this link. Thanks!