For all you hear about makers of independent film having now migrated to TV, you still get some belters. In just the last fortnight we've had the masterfully tense revenge thriller Blue Ruin and now Frank, a gleefully nuts music movie based on Jon Ronson's experiences playing keyboards for Frank Sidebottom. When you can convince a star like Michael Fassbender to wear a huge fake plastic head for a role, you can probably say with some certainty that indie film's not dead yet.


Seeking a bit of context for this review I watched Jeff Feuerzeig's 2005 documentary The Devil and Daniel Johnston this week, having seen Ronson and Fassbender cite the troubled Austin musician as a touchstone for Frank. I was struck by two things. First, the film accepted entirely that Johnston is a genius, when his hipster audience's reaction to his songs seemed to me emblematic of the emperor's new clothes. Second, it raised very well the issue of when healthy creative eccentricity spills over into psychosis, and how it might be indulged a little too readily in creative communities. 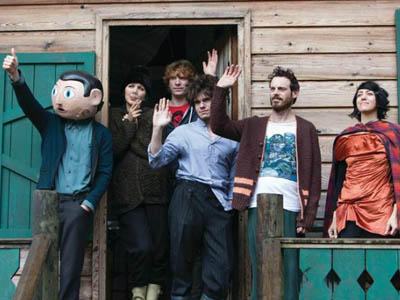 The Domino's delivery guy always got a good send-off.


As much as Frank is about mental illness, it's at its heart a film about belonging. A band is a gang, after all, and where countless teenagers find a new home just as they are becoming disconnected from their families for the first time, as Patrick Freyne wrote last month in his excellent account of band life. Jon (Domhnall Gleeson) is on the cusp of this change and finds himself the keyboard player in an avant-garde group led by Frank, who is lauded as a genius by the other members and wears the head at all times.

Jon doesn't belong in the band - as perennially spiky theremin player Clara (Maggie Gyllenhaal) keeps reminding him - and his journey is to discover this, but equally Frank doesn't, couldn't, belong anywhere else. Their music is a wilfully recalcitrant mish-mash of Joy Division, Bowie and the sound of a man twatting a sink with a hammer. (The songs, by Stephen Rennicks, do a perfect job of being weird with enough of a dash of tuneful potential to make you think they might be on to something.) Jon sees the head as a marketable gimmick, and convinces Frank that they have a shot at fame, but misses the point. 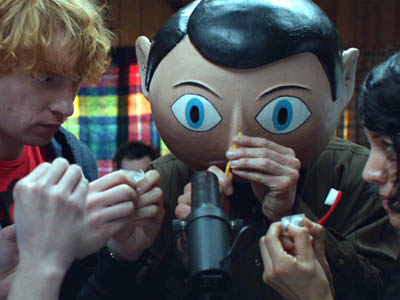 You laugh, but toothbrush skiffle is probably all the bloody rage in Hoxton.


Ironically, he's subverting the band by being conformist. But the band is for Frank a way of making sense of the world; a twisted, unruly mess to match his (real) head. Fassbender's turn seems overtly comic to begin with but you soon realise he's acting his dappy mug off underneath the plastic dome. With a slight turn of the head at just the right moment (nigh-impossible to pull off, you'd think, given that he could barely see out of it) he expertly conveys the sense that there's a huge amount going on underneath it. Madness, almost certainly, but possibly genius too. It put me in mind of Tom Hardy as Bane, a performance wonderfully expressive despite - or perhaps thanks to - its facial constraints.

None of this works without Gleeson's anchoring, however. Just as he saved Richard Curtis's About Time from tipping over into whimsy, so his awkwardly British everyman (which he does fantastically well for an Irishman) is just the reference point we need to observe the band's nuttiness. But more than being just the eyes through which we view it, Gleeson understands that Jon has the most important arc of all, which is, through trying to belong in a place he does not, to make sense of his place in the band and the world. His journey is, then, not so different from Frank's: both are adrift in their own ways, both seeking a shoreline. So in the end, who is really the mad one?

(It's Frank, obviously: he wears a fucking massive plastic head.)

More:  Frank  Lenny Abrahamson  Domhnall Gleeson  Michael Fassbender  Maggie Gyllenhaal  Scoot McNairy
Follow us on Twitter @The_Shiznit for more fun features, film reviews and occasional commentary on what the best type of crisps are.
We are using Patreon to cover our hosting fees. So please consider chucking a few digital pennies our way by clicking on this link. Thanks!