We all had a wry chuckle (is there any other kind?) when I mocked Fright Night's draconian embargo policy, but there's nothing funny about Fright Night itself. It's a remake hamstrung by its own total lack of ambition, overshadowed by its own legacy and crippled by needless, awful 3D. Sorry to go for the jugular straight away, but I've been waiting months to get this out of my system. THE INTERNET MUST KNOW MY OPINION.


Even if you've not seen the 1985 original, Fright Night seems familiar from the start. There's the plucky teen (Anton Yelchin, a good five years older than the part requires - he's got crow's feet!), his unfeasibly hot girlfriend (unfortunately named Brit sort Imogen Poots), nerdy best friend Ed (whatever the guy who is McLovin used to be called) and saucy vampire neighbour Colin Farrell, who's actually enjoying himself playing a sexual predator (heaven knows why). It's basically Disturbia with vampires and is exactly as exciting as that sounds. 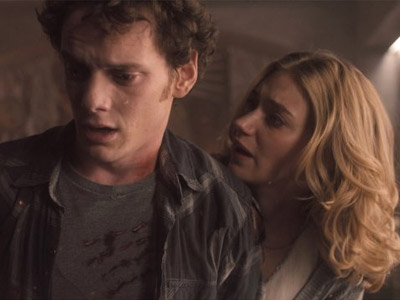 
Here's the thing: it's 2011. Check your calendar. Remake or not, if you're going to make a vampire movie in 2011, you'd better at least try to do something original. Something. Anything. Add to the lore. Take away from the lore. Change something. Establish some rules. Break some rules. Why just roll out the same old shit? Look at a film like Daybreakers - it didn't quite work, but at least it attempted something original. Fright Night makes the mistake of thinking ragging on Twilight makes it relevant. Say what you want about Twilight, but shit, dude, at least it's an ethos.

No characters especially deserve your sympathy or your attention. Yelchin's teen isn't particularly likeable or charismatic, is a dick to his former best friend and doesn't deserve his hot, sexy girlfriend. Chris Mintz-Plasse (I Googled him) doesn't make much of an impression. Farrell at least projects menace, but he's still a panto villain, certainly not frightening in the slightest. Even after "400 years of survival", he still falls for the same old hackneyed routines. Hasn't seen any vampire movies? Not even Twilight?

Fright Night only picks up when David Tennant is on screen, but even then, he quickly outstays his welcome. His Jack Sparrow-esque mince (or is it a Russell Brand strut?) raises a few laughs at first, but foul language isn't enough to make a character interesting. I don't think he has a single gag in which the punchline isn't a profanity - shame, as Tennant is the only thing worth watching.

All this going through the motions would be fine, passable perhaps, if the movie's 3D wasn't so utterly, utterly terrible. It's a movie set primarily at night, which means the natural murk that dark glasses provide is multiplied tenfold. For the first and final thirds, you can barely see a thing - it's like watching a movie through a thick fog. At first I thought one of the characters' houses was on fire. It makes for an awful audience experience. 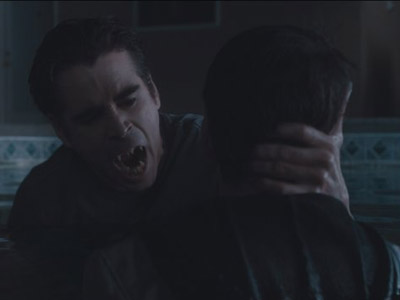 PLEASE HELP ME, I CAN'T SEE ANYTHING


At one point, there's a joke about how instead of lurking around in the dark with a torch, a character just turns a light on - ha ha, except even when he does, you still can't see anything. Needless to say, the 3D adds nothing and takes away everything.

The problems all stack up. The vampire effects aren't particularly good, the set design is drab, there are plot holes all over the place - like Yelchin entering a house at the dead of night and exiting shortly afterwards in daylight - plus a ridiculous scene in which a character picks a lock with an iPhone app called 'How To Pick A Lock'. It's that sort of movie.

Tennant can f-bomb all he likes and Farrell can smoulder until his t-shirt catches fire, but the fact is, Fright Night isn't scary, funny, sexy... hell, it's not even visible.

More:  Fright Night  Colin Farrell  David Tennant  Anton Yelchin  Imogen Poots  Toni Collette
Follow us on Twitter @The_Shiznit for more fun features, film reviews and occasional commentary on what the best type of crisps are.
We are using Patreon to cover our hosting fees. So please consider chucking a few digital pennies our way by clicking on this link. Thanks!