I've always thought the point of found footage movies is to get across the idea that the amateur camera operator faced some sort of danger in filming the incidents, and transfer that danger to the viewer. Their marketing campaigns, from Blair Witch onwards, have usually tried to build a world in which the shocking footage is real and place you within it, some more successfully than others. Fruitvale Station, based on and extrapolating from real footage of a terrible event, shows why that shock value is so hard to replicate.


The incident in question isn't one of which I was aware prior to seeing the film, as I suspect most UK viewers won't be. Twenty-two-year-old Oscar Grant III was shot by a transit police officer on New Year's Day 2009 on the titular station platform in Oakland, California and later died, having been detained on suspicion of fighting on a train. This was recorded on several cameraphones and put online, sparking protests and a wrongful death lawsuit by his family. 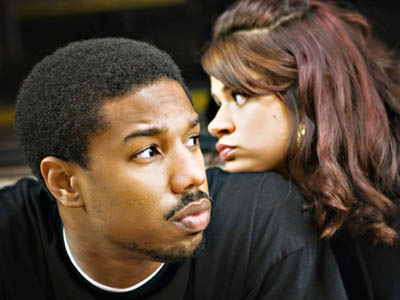 Michael B Jordan. Not pictured: Magic B Johnson.


Fruitvale Station begins with that footage (a decision first-time writer-director Ryan Coogler was initially against, before conceding it was necessary to frame the story for international audiences) and moves on to show us Grant's final day. The idea is to humanise him; elevate his life from more than just a name in a newspaper column for the viewer. This is certainly achieved, not least through some excellent work by lead actor Michael B Jordan, but this humanising rightly works both ways: this is no hagiography, and we find flaws in Grant's character as much as we do points of sympathy.

Coogler does a very good job of making us like Oscar, and the fact that we know his fate in advance only makes the day more poignant. Early in the day, for example (in a fictionalised scene), he finds a dog that's been hit by a car and looks after it till it dies. Yes, it's making a little hay with the advance knowledge it's given you, but the parallel isn't hammered home too hard.

We avoid obvious Titanic-style dramatic irony for the most part (other than Oscar's mother insisting he take the train to his New Year's party, which was apparently true in any case), and see him being a caring father and son, and making a decision to leave drug-dealing behind. But he also is revealed to have cheated on his girlfriend in the past and to have spent time in prison, and threatens a supermarket manager who fired him. Fruitvale Station sets itself, and us, a challenge in this regard; an experiment in audience sympathy. 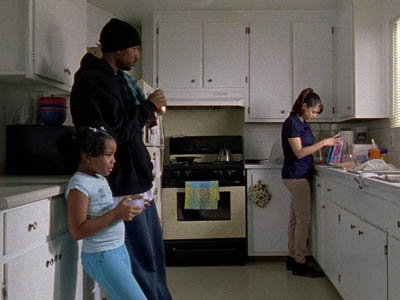 
There are levels to this. In a fictional drama there is an unspoken agreement between maker and viewer that transgressors who die deserve to in some way. (Say a hero on the wrong side of the law gets caught in a shoot-out with police and kills a few. If the force is corrupt this isn't problematic for the viewer, even though the officers likely have families and so on; if not, the shooter is the bad guy and deserves punishment.) Fruitvale Station is not a fictional drama but is largely framed as one, certainly including several fictional scenes, and so forces you to judge this case based on your own prejudices without the framework of a straight Hollywood narrative to fall back on. Oscar Grant obviously didn't deserve to die, just as no one does in real life, and in particular because he seems to have done little to provoke the police, but were this a fiction would we sympathise with him as keenly given the moral judgements we've made earlier? I was on his side; some reviews of the film in conservative media have been less forgiving.

The event, when it comes, is no less powerful for your foreknowledge, shot handheld to give a sense of immediacy and threat, and seems to have been pieced together diligently using witness statements and the original videos shot by the passengers shut inside the train. Jordan continues to be a hugely promising young actor, accurately nailing the required equal senses of tenderness and short-fuse aggression. And Ryan Coogler handles incendiary subject matter with an obviously principled rigour. You won't find many better debut features.

More:  Fruitvale Station  Ryan Coogler  Michael B Jordan  Melonie Diaz  Octavia Spencer  Kevin Durand  Chad Michael Murray
Follow us on Twitter @The_Shiznit for more fun features, film reviews and occasional commentary on what the best type of crisps are.
We are using Patreon to cover our hosting fees. So please consider chucking a few digital pennies our way by clicking on this link. Thanks!