It turns out that I have a small issue with a lot of gangster films, which I didn't realise until watching Gangster Squad. For all their sharp-suited, Tommy gun-wielding adventures, most feel the need to bring home the heavy-hitting drama underlying it all. Of course, there's no problem with this, but it seems to me that Hollywood has spent so long trying to tell us the real story behind some of history's most infamous outlaws, that it seems to have forgotten how to tell us the fake, fun, irresponsible version. This is where Gangster Squad chimes in; a film so gloriously cartoony at times that it feels ripped from the frames and pages of a graphic novel. Even though it is actually um... based on true events.

This isn't to say that Gangster Squad ventures into Dick Tracy territory, but the whole film feels wholly derived from the gangster tropes that we all know and love. There are night-time raids, snappily dressed gunfights, a brutal, unforgiving mobster boss and, of course, everyone talking in those wonderfully affected metaphors (as Ryan Gosling eyes up mob kingpin Mickey Cohen's girlfriend - the red-headed, red-dressed "tomata" Emma Stone - a friend warns: "The prize for taking the king's dinner is a vacation in a pine box").

The film owes so much to these clichés, it almost feels like it's trying to be the ultimate gangster flick, riffing off every tradition we have come to expect from the genre. As a result, in the seriousness stakes, the film falls somewhere between Public Enemies and Dead Men Don't Wear Plaid. And yet Gangster Squad strikes an impressive balance, marrying real life with a super-stylised, hyper-violent aesthetic (thus making sense of the dynamic, pulp fiction-y title). It's basically the movie adaptation of the trashy comic-book adaptation of The Untouchables. 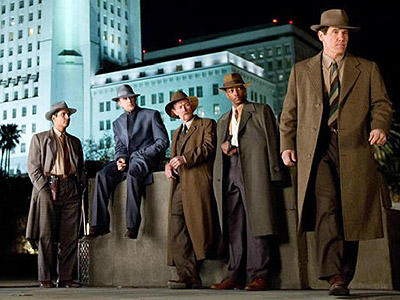 
That’s no mere passing mention of the De Palma classic either. If there is one film from which Gangster Squad borrows heavily (read: steals entire plot), it's The Untouchables. It’s fair to say that this tale of a group of hardened policemen forced to go 'off the record' in order to bring down the town's leading mobster is lifted pretty much directly from a film we already know inside out.

And that's not to mention Sean Penn's violently unpredictable Mickey Cohen having more than a few shades of Bobby De Niro’s Capone (although a one-liner "Here comes Santa Claus!" seems designed to be this film's "Say hello to my little friend!" in a moment stolen from De Palma's other legendary gangster movie). By the time we get to an epic Park Plaza Hotel shootout with echoes of the Grand Central station stairs, it’s clear that Gangster Squad is toying with the line between 'homage' and 'straight-up plagiarism'. 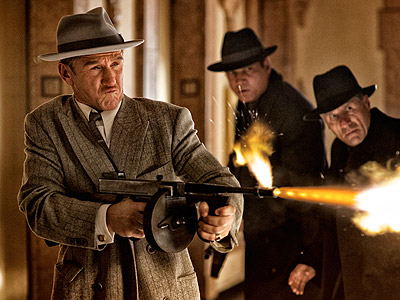 
The group itself breaks down into familiar pigeonholes too. Robert Patrick is the sharp-shooter, Giovanni Ribisi is the tech guy (if a reel-to-reel recorder can still be called 'tech') and Anthony Mackie is handy with a knife. Save for a nicely hinted partnership between Patrick's old-timer and Mexican rookie Michael Peña though, the focus of the group is rightfully on Ryan Gosling’s Romeo role Jerry Wooters and Josh Brolin's righteous leader John O'Mara. Gosling is as man-crushingly watchable as ever, simmering with both intensity and fragility while embroiled in his dangerous liaisons with the just-crushingly wonderful Emma Stone. Brolin, however, is a little harder to get on board with – so noble and honourable to a fault, his obsession to bring down Cohen’s criminal empire despite his pregnant wife’s concerns paint him into a somewhat unrelatable corner.

All of these easily stereotypical characters serve a collective purpose though, as the film favours flash-bang action and stunningly framed shots over digging deep into character arcs. The film may gloss over certain sub-plots, but you rarely feel short-changed by what is often just story shorthand – we don’t need to see Brolin's wife staying up all night with worry about her husband’s heroics to understand what is at stake. The only misgiving in this area is that Gosling and Stone don't get enough time onscreen together to truly allow their chemistry to sizzle like it did in Crazy, Stupid Love. 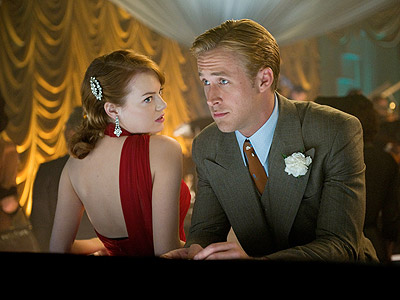 We should all just kill ourselves and let them repopulate the planet.


However, it's a small fault in what is otherwise a slick, glossy film with fine comedic streaks (the group's first raid descends into hilarious farce) and thrillingly tense set-pieces. With the tone kept so fun and, yes, a little cartoony, the only real question is why it was loosely based on true events at all. All this seems to do is set up false expectations for a gritty, inside look at the real-life machinations for being a gangster. It might have been better to forget the historical pretence, rename Mickey Cohen as something like 'Big Eddie' and let the audience just enjoy the show.

More:  Gangster Squad  Ruben Fleischer  Josh Brolin  Ryan Gosling  Sean Penn  Emma Stone
Follow us on Twitter @The_Shiznit for more fun features, film reviews and occasional commentary on what the best type of crisps are.
We are using Patreon to cover our hosting fees. So please consider chucking a few digital pennies our way by clicking on this link. Thanks!