Pop star biopics don't really work, do they? They love to take great, heavy-handed pains to hint at the inspiration behind the subject's most famous work, like a whole film comprising Forrest Gump telling John Lennon how in China the people have no possessions, and no religion too. Get On Up, the story of James Brown, isn't quite as guilty of this as most, and boasts a standout lead performance by Chadwick Boseman, but by Christ, its script is funky, and not in a good way.


In the same way that watching a bad Channel 5 documentary about Nazis is a decent enough way to spend an evening because Nazis are really interesting, Get On Up holds the attention just fine, despite an overconfident 140-minute runtime. Because there's a great story in there; it just has no idea how to tell it.

It's a brand new bag full of bizarre, scattergun chronology, blind alleys, and abortive attempts to flag up precursors to significant events. Brown's childhood in South Carolina and Georgia backwaters is shown and alluded to often enough that you recognise they're trying to suggest a link between the experiences of the child and the man he became, but figuring out what connection is being proposed is like playing snooker in the dark. 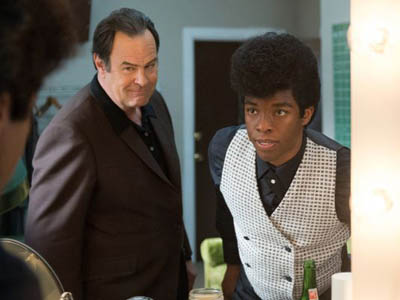 Oh yeah, and Dan Aykroyd's in it. I forget why.


His mother walks out on him and he doesn't seem all that bothered until he sees her again years later, having exhibited no signs of any detachment anxiety. A scene in which the young Brown is forced to box other black boys for rich white men's entertainment and gets knocked down but is inspired, literally, to get on up by a vision of the ringside ragtime band playing funk is balls-out mental, but what on Earth it's attempting to suggest about the man is wholly obscure. In a car chase with police, off his face on PCP, Brown sees a vision of his younger self and parents in the back of the pursuing squad car. Sorry, what?

All this doesn't comprise vignettes so much as incomplete scenes, thrown together in a random order. As if having researched the script only through reading the quicklink headings at the top of the James Brown Wikipedia page, the writers throw you bit after bit intended to demonstrate some facet of the man's character. Civil rights! He was a bit miffed about Martin Luther King's death: throw that in then forget about it. Black consciousness! Stick him in a tribal shirt and give him an afro for three scenes: yep, that'll do. Wifebeating! One scene should do the trick: shouldn't imagine this is is behaviour likely to be repeated, so probably no need to bother writing it in again. 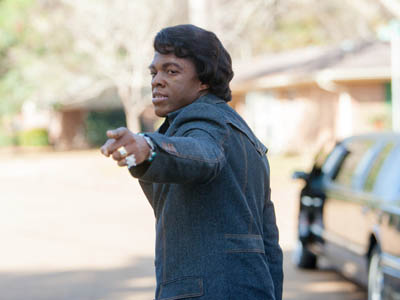 
It's a damn shame for Chadwick Boseman, who has worked a meticulous level of detail into his performance. The voice, the deportment, the on-stage acrobatics, the slow, shambling gait getting even more languid as he ages: it's all there and it's all bang on the money. It doesn't, in truth, amount to much more than a great impersonation, but the fault's not his: there's no opportunity to develop it into a more rounded performance, because the script doesn't offer it. An attempt is made to see a little bit more of the man behind the bouffant with some fourth-wall-breaking chat straight to camera, but the film doesn't commit to it, dropping it in when it suits but not enough to make it a constant motif, so the effect is jarring. It's billed as a warts-and-all account, but it's nothing of the sort, happy to relegate regular, monstrous behaviour towards the women in Brown's life to one scene. (Well, two, but the second one ends in sex so isn't a brilliant example.)

They were lucky to get an actor who'd commit to it to such a degree, but the film can't expect to hang the whole thing on him. Boseman didn't need more from the filmmakers; he needed less: a screenplay and direction confident enough in the strength of its story that it didn't feel the need to jump back and forwards in time or make nonsensical links between childhood and adult behaviour. You can't help but feel his story deserved a bit better.

More:  Get On Up  Tate Taylor  Chadwick Boseman  Nelsan Ellis  Dan Aykroyd  Viola Davis  Lennie James  Fred Melamed  Craig Robinson  Jill Scott  Octavia Spencer
Follow us on Twitter @The_Shiznit for more fun features, film reviews and occasional commentary on what the best type of crisps are.
We are using Patreon to cover our hosting fees. So please consider chucking a few digital pennies our way by clicking on this link. Thanks!