Ghost In The Shell

'The only colour that matters in Hollywood is green,' he typed, pleased with himself, attempting to clumsily sidestep the whitewashing controversy that surrounded the movie. Okay, fine. Is Ghost In The Shell racist? I am here today to spectacularly ignore that important issue, not because it's not worth addressing, but because the answer is 'Yes, but only as racist as most other movies', which is not exactly a good point on which to start a healthy and balanced debate. Let's just get on with the review, shall we? This is already in my top five worst opening paragraphs.


First of all, Ghost In The Shell is hands down one of the best-looking movies I have ever seen. It is genuinely astonishing from top to bottom and inside out. It stands on the shoulders of what Syd Mead did with Blade Runner and gives the future Asia aesthetic a 22nd-century makeover. Every location shot is a goddamn work of art. The scope of the IMAX-friendly cityscapes is mind-boggling. I want to personally high five every graphic designer and digital artist who pulled extra shifts and worked weekends on this movie, because they have achieved the pinnacle of their profession: Ghost In The Shell feels tailor-made to sell ridiculously large TVs that you can't afford in John Lewis. 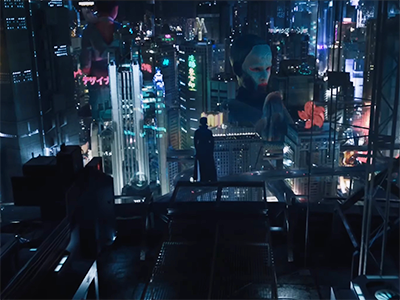 
The film is housed in a very attractive shell, but unlike Scarlett Johansson's Major, there's not much of a 'ghost' rattling around upstairs in the old brain box. The story of state-owned cyborg killbot Major and her origins, Ghost In The Shell is powered by a mystery that is not particularly mysterious, and takes two hours to divulge details you could have easily guessed in the first five minutes. Wait, you mean to tell me that this story about a human brain inside a robot body contains... emotional complications? Constant duh-duh platitudes like 'What we do defines us' reinforces the idea that, like The Matrix before it, Ghost In The Shell is cod-philosophy for dummies. There's no deeper level beneath the surface drama: it's just RoboCop with tits on.

Perhaps I'm looking too much into it, but Scarlett Johansson seems to gravitate towards this kind of glassy but vacuous role: we saw her play empty vessels in Lucy (playing an emotionally detatched demigod), in Under The Skin (an emotionless alien), in the Marvel movies (a closed book) and she's at it again here. The Major is more womachine than woman, but again we're asked to read into Johansson's dead-eyed stare to read emotional complexity that isn't always present - quite the problem when your story is extolling the everlasting virtues of the soul. If I was being cynical I would suggest that gravitating towards blank slate ciphers is what makes her popular the world over, but really I think I'm just disappointed that I can't remember the last movie where I actually saw Scarlett Johansson emote. 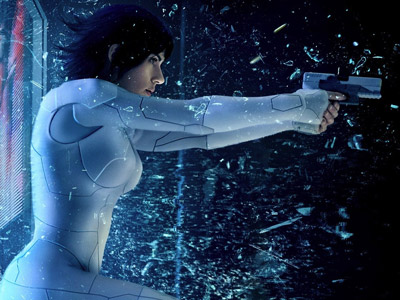 Another boring workday for Scarlett Johansson.


The rest of the cast are a mixed bag. Juliette Binoche is over-qualified as the doctor who gives Major life: she's present in all her scenes but really you can tell she's already thinking about making other, more French, more depressing movies. Peter Ferdinand is a bit of a naff villain, not just because he looks like an off-brand McGann brother. Michael Pitt is a riot as the junk heap cyborg terrorist who, despite being a very modern creation, still talks like the Windows '95 speech generator (you know, the one you made say stuff like 'Alan just farted' or 'Peter is gayayayayay' in I.T. class). Danish actor Pilou Asbaek is great value for money as Major's partner Batou, and her crack team of operatives, led by Beat Takeshi, does lend the film a welcome air of camaraderie.

It's a frustrating film, because for every basic bitch plot fart - like when Major 'deep-dives' into a dangerous AI consciousness (i.e. plugs into the Matrix) and escapes certain doom by, er, just unplugging with absolutely no consquence - there is a moment or a visual where you can't help but oooh and ahhh like an old-timey simpleton. Yet despite A+ world building and technical wizardry, the most effective scene in the is between two women sitting at a kitchen table while a kettle boils. Ghost In The Shell is a movie that makes sweet, tender love to your synapses, but it never gets your brain hard - for a quick blast of action sci-fi it's perfect, but it could be obsolete as early as October this year when Blade Runner returns.

More:  Ghost In The Shell  Manga  Rupert Sanders  Scarlett Johansson
Follow us on Twitter @The_Shiznit for more fun features, film reviews and occasional commentary on what the best type of crisps are.
We are using Patreon to cover our hosting fees. So please consider chucking a few digital pennies our way by clicking on this link. Thanks!