When this movie was pulled from release last summer weeks before it was due to hit cinemas, the internet was rife with theories about why. Was it just because the studio decided to post-convert to grab a slice of the 3D pie? Or did Channing Tatum become such a big star that reshoots were necessary to pad out his role in the film? Whatever the reason, it's safe to say that the subsequent nine months were NOT spent trying to make sure that this baffling, ridiculous juggernaut of mindlessness made a lick of sense. Because, despite having an extra nine months to somehow improve on itself, G.I. Joe: Retaliation ended up providing some of the most fun I have ever had watching one of the worst films I have ever seen.


But please don't take that claim to be any kind of endorsement for watching this movie. I assure you that every laugh I had, every jaw I dropped and every screwed-up confused face I wore was done so at the film's expense. It cannot be stressed enough that this is a movie consisting entirely of what-the-fuck, what-is-happening, what-did-he-just-say and what-is-the-point-of-all-this moments. And as a result, it is wholly and unintentionally hilarious.

From the start, it is clear that director Jon M. Chu loves gunfire, because its fucking everywhere. But, with blazing muzzles and our Joes running, jumping and climbing up every corner of the screen, it's impossible to see the enemy. If G.I. Joe: The Rise Of Cobra was like watching a kid play with his toys, this sequel is like watching a bunch of them running around a playground pretending to shoot non-existent baddies.

This is the template for all the action throughout, and is never more noticeable than during a cliff-face face-off between fan fave Snake Eyes, new partner Jinx and a bunch of ninja red shirts who are all easily dispatched. As the camera follows swinging and flailing CGI ninjas, we see weapons, limbs and debris fly toward the screen in an obvious attempt to provide some 3D thrills, but which ultimately leaves the entire sequence incomprehensible. And that's not even taking into account this set-piece's utter disregard for the laws of physics. 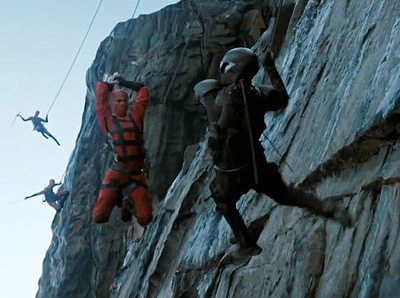 Ninjas can fly and shapeshift and travel through time, right?


If only the plot were easier to understand. The Joes are attacked, left for dead and branded enemies of the state by an evil president doppleganger, while Storm Shadow rescues the previously captured Cobra Commander and puts into motion a devious plan for world domination. Yet, while we switch between the three remaining Joes trying to make it home and the evil president taunting the real president, by the time Snake Eyes pops up in Tokyo to capture his white-robed nemesis, all sense of story has jumped off the nearest cliff.

And Cobra's evil plan? It's to gather all the world leaders in one place, force them to fire nuclear weapons at each other through sheer insurmountable peer pressure, and then get them to abort the weapons using the same game of chicken... only for Cobra to reveal EVEN BIGGER NUCLEAR WEAPONS IN SPACE that render the whole scene pointless.

In the acting department, everyone is as much on autopilot as you'd expect. The Rock might as well be physically holding the film together with his massive arms, but all the characters have their moments of spewing forth terrible dialogue (when you can hear it - a mumbling Channing Tatum is as indecipherable as the raspy, masked Cobra Commander).

The standout role goes to Jonathan Pryce as both the good and bad president. This poor acting legend is given such dialogue clunkers as "I'm the quicker blower-upper, baby!" and confusing threats like "The Joes are out of the picture. By which I mean they are alive and on Earth". Pryce does a great job at trying to make these work and, with one quick gag of him playing on his phone during a pivotal moment, he almost manages to put enough tongue in his cheek to make the whole thing seem comically playful. But there's just too much stupid going around for him to pass anything off as intentionally daft.

As the film reaches its climactic ending, the bonkers guns are firing on all silly cylinders. We have now met Bruce Willis's cameo, who has pretty much no effect on proceedings other than to be casually sexist (er... go Joe?) and, as they all carry out a devised strategy to save the day, it seems that Dwayne Johnson pulled the short straw to end up driving a mini-tank in the middle of nowhere, shooting at no one in particular. Following the kids-in-the-playground analogy, The Rock is now the child playing with a digger in the sandpit BY HIMSELF. 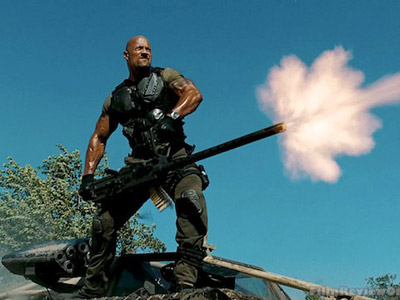 
As the film finally stutters through an epilogue scene, which ends with one last moment of bewildering senselessness, you can look back on the whole viewing experience as being utterly deplorable - and utterly laughable as a result. As the credits roll, you'll be left utterly dumbfounded by the preceding two hours, with the stink of several logic farts still lingering in the air. Why was Walton Goggins in charge of a huge subterranean base holding just two paralysed prisoners? Why has no one even commented on the fact that a major city was blown to smithereens, killing its entire population in the process? Just what was Ray Stevenson's accent?

But, however enjoyable it is to watch a truly terrible film, one thing is certainly clear: that extra nine months was a complete waste of time. Whether we now get any extra Chan-Tates or whether it was all for an unimpressive third dimension, it's hard to see how the first version could have been any worse than this.

More:  GI Joe Retaliation  GI Joe  Jon M Chu  Dwayne Johnson  Channing Tatum  Adrianne Palicki
Follow us on Twitter @The_Shiznit for more fun features, film reviews and occasional commentary on what the best type of crisps are.
We are using Patreon to cover our hosting fees. So please consider chucking a few digital pennies our way by clicking on this link. Thanks!