Ice hockey sits pretty atop my 'If I was an American high-schooler, I'd definitely think about playing it' list. Unfortunately, Hollywood doesn't appear to share my enthusiasm for needless icy bloodlust. There have been plenty of American football, baseball and basketball movies, but when it comes to ice hockey, what do we have? Slap Shot? That's 35 years old. The Mighty Ducks? Pfft, Goon would smash its teeth in and down a beer in celebration.


Based loosely on the book 'Goon: The True Story of an Unlikely Journey into Minor League Hockey', Goon: The Movie is penned by Evan Goldberg and Jay Baruchel and tells the story of Doug Glatt (Seann William Scott), a not-too-bright but kind-hearted bouncer who's handy with his fists. So when his motormouth best friend Ryan (Jay Baruchel) runs into trouble with an angry hockey player, Doug steps up and lets Jack Johnson and Tom O'Leary do the talking. The team's coach is impressed and swiftly signs him up as an 'enforcer' – the team's fighter.

Doug soon finds himself recruited by the floundering Halifax Highlanders, and, as in most sports comedies, he teaches them about togetherness and leads them to the play-offs. However, not before he's beaten the shit out of everyone and come face-to-face with Liev Schreiber's seasoned enforcer, of course. Go Highlanders! 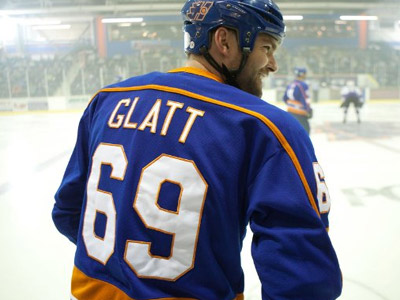 I see what they did there.


You've probably fathomed Goon sticks closely to the tried-and-tested underdog sports comedy formula, but how it plays out is what sets it apart from your Waterboys, Bad News Bears and Semi-Pros. Evan Goldberg and Jay Baruchel make for a talented writing duo while Seann William Scott, perhaps for the first time in his entire career, doesn't come across as a pretentious dick and is actually quite lovable; a sweet guy off the ice but a real hard-ass on it.

Where Goon stands up for itself is in the sheer unashamed brutality of it all, with the violence more Raging Bull than Dodgeball. The crunching, thunderous sounds of slow-motion punches are positively earth-shuddering. Director Michael Dowse isn't afraid to spill the red stuff and a scene where Doug gets a puck straight to the chops will have you wincing all the way home. This is easily the most unsettling, ferocious, bloody comedy in a long time.

But there's more to Goon than bloodshed. Like all good rags-to-riches stories, the star would be nowhere without his team. There's the divorced, alcoholic captain, a couple of perverted Russians, a goalkeeper obsessed with his mother, Kim Coates' hot-headed, sweary coach and star player, and Edgar Wright lookalike, Xavier LaFlamme, who feels threatened by Doug's popularity. It's a rag-tag bunch of misfits but they're all memorable and all bring something different to the rink. 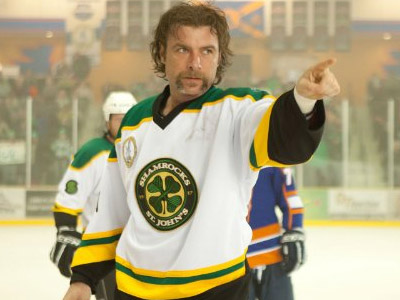 This man is married to Naomi Watts. The injustice.


Meanwhile, Liev Schreiber - sporting his Sabertooth tache - is suitably menacing as Ross 'The Boss' Rehn, the league's most notorious enforcer looking for one final hoorah before retiring. No surprises for guessing who he set his sights on.

If you chip away at the ice, Goon turns out to be a charming, inspirational sports movie with plenty of heart, even if it is wearing it on its fists. And as ice hockey movies go, this is definitely one of the best. Now if you'll excuse me, I've got unfulfilled ice hockey dreams to play out on NHL 2012.

More:  Goon  Michael Dowse  Seann William Scott  Evan Goldberg  Jay Baruchel  Liev Schreiber  Sports
Follow us on Twitter @The_Shiznit for more fun features, film reviews and occasional commentary on what the best type of crisps are.
We are using Patreon to cover our hosting fees. So please consider chucking a few digital pennies our way by clicking on this link. Thanks!