Since the dawn of time, man has struggled with the eternal question. Should Batman be camper than a chicken, or dark and embittered, brooding in the shadows and all miffed, like? Well, here's FOX's solution: how about a bit of both? (Spoiler-free.)


The question's sort of moot, seeing as he's barely in the thing, but that's the tone we're going with here. Gotham's a post-industrial city in decay, with a lot of rain, endless dark back-alleys flanked by fire escapes, and a pretty hairy pack of criminals. The standard street thugs obey the general laws of grittiness, but when we meet the rock-star villains we see a more cartoony side.

Not Jim Carrey's Riddler cartoony, but somewhere along the way to it. So we get introduced to just about everyone: a young Edward Nygma, working forensics for the GCPD and talking in interminable riddles; Oswald Cobblepot, a snivelling wretch with a perma-cold; a teenaged Selina Kyle; a brief appearance by an unnamed stand-up comedian who you guess must turn out to be ... well, you know. All of them have a clownish, vaudevillian air about them; a sort of heightened personality designed to elevate them above the central-casting hoods. Yes, it feels a little like Muppet Babies, or unlocking a new character every five minutes in an hour-long Arkham City session, but this is essential for the pilot episode, especially given the rogues' gallery promised in the marketing. Otherwise it's just a police procedural. 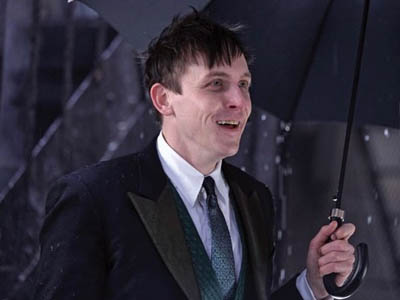 I forget who this guy grows up to be. Umbrella Man or something.


It comes very close to this. The central premise is really only cops and robbers: a young Detective Jim Gordon (Ben McKenzie), fresh out of the army and flushed with righteous resolve, gets stuck with Harvey Bullock (Donal Logue) for a partner. The idealist and the jaded old stager lock antlers, of course: Bullock doesn't want any part of a high-profile murder case; he's corrupt and Gordon's having none of it. So far, so Serpico.

What it needs is a reason to exist, and to its credit, it keeps on delivering them. It's a curio, this city full of proto-villains whose characters you already know, but here's the crucial thing: you don't know in advance their whole arcs. You might have read a few Batman comics with the Penguin in, say, and I'm guessing his origin's more or less the same each time, but that's not his only story. He's been in films and TV shows; video games. These characters' ultimate stories haven't been set in stone by definitive adaptations in the same way that obliges Hannibal or Bates Motel to find interesting ways to lead you down a path whose ending you already know. Within certain parameters, Gotham's a sandbox. 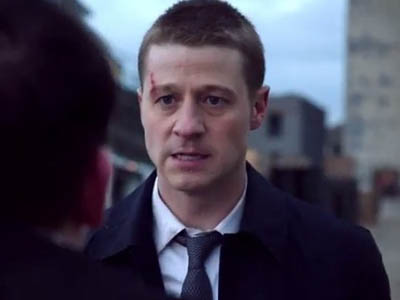 Don't worry, Jim: you've got a few years before someone shoots your daughter through the spine.


The question is: is this world rich enough without Batman? On the evidence of the pilot, yes. There's no other comic book setting that has the depth of characters available to it to do this; at least not all in the same place. (If you tried to do it with Metropolis, for example, a fair few would have to be in outer space.) I'm sure the PanelBeats guys will tell me otherwise, but lay off: I haven't read a comic since Spider-Man and Zoids.

It looks like there's an idea to anchor it around the rule of Carmine Falcone, to whom all the other crooks and half the cops ultimately report, which seems like a sensible enough structure to me. With Gordon off on his mission to investigate this corruption, you've got a template in place whereby you can give the various bad guys three- or four-episode arcs here and there and open the whole thing up. At this stage, I don't even want to see Batman, and I guess that's exactly what they were hoping for.