Guardians Of The Galaxy Vol. 2

While fans continue to squabble over the correct, surely-soon-to-be-official 'Ultimate Ranking of MCU films' (nearly there, guys! Seriously, you're doing great work), it's easy to overlook the fact that, at this stage, the Marvel movie-making model looks unlikely to ever produce a truly bad film. Sure, there have been Dark Elvish messes and Mickey Rourke-sized hiccups, but Marvel really has its mathematically-safe, formulaic shit together now and, as a result, always delivers an agreeable level of fun and action albeit without taking any real risks. That is, except for Guardians Of The Galaxy, the only property in the Universe that still feels like a gamble, sitting apart from the homogenised Avenger adventures to follow its own completely different set of rules. Which is why it's a shame that this sequel follows them too.


It feels harsh to immediately rag on a film that is, on the whole, perfectly fun and funny and action-packed and visually exciting, but those are all things that we have come to expect from our Marvel movies. When a studio hits its own benchmark so consistently, it just feels more prudent to delve straight into what its latest instalment gets wrong rather than what it gets right, doesn't it? And that's particularly relevant here, because what this film gets wrong is simply doing too much of what its predecessor gets right.

Thought the first Guardians Of The Galaxy was funny? This film doesn't let a single scene go by without undercutting it with a silly quip at the last moment. Enjoyed the pop culture nostalgia in the first film? This sequel has surprises and cameos specifically designed to tickle the geeky part of your hippocampus. And what about that kick-ass soundtrack, eh? Luckily for you, this film cares about its own songs so much, it telegraphs each and every one of them in the style of a shopping channel commercial trying to sell a compilation CD. 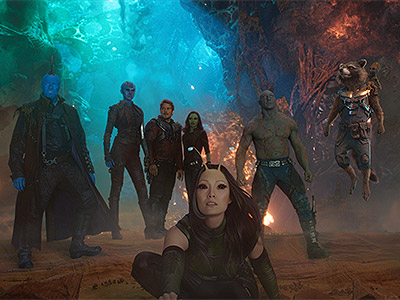 All of the greatest hits are here, with some new ones sneaked into the mix too.


Put another way, if Vol 1 was a mixed tape of great numbers, Vol 2 simply swaps out the songs with like-for-like beats and turns the volume way up. It's the brash cover version, played confidently but lazily because it doesn't matter - this tune has already been certified as an absolute banger, and surely that's enough to keep everyone entertained.

(Had enough of the laboured musical analogies? Are you sure? Because I have a cracking one about a great-tribute-act-but-still-not-the-real-thing ready and waiting? Ok, fine. Let me know if you change your mind.)

At least this time round, with the Guardians pre-assembled, there's room to explore some more serious family themes. With Chris Pratt's Peter Quill's Star Lord reuniting with his until-now unknown father Ego the Living Planet (Kurt Russell), and Gamora and Nebula trying to overcome their own Thanos daddy issues to reconnect as sisters, there are implications and actual character arcs for everyone involved. Even Michael Rooker's Yondu gets added layers in his role as Peter's adoptive father, while Rocket assesses his place in the group and Drax takes a few seconds out from being an insensitive idiot to remember - oh yeah - the wife and child he lost.

Of course, the real message is that the Guardians themselves are just like one big dysfunctional family, and never is that more emphasised than when they take it in turns to look after the baby-like Baby Groot. 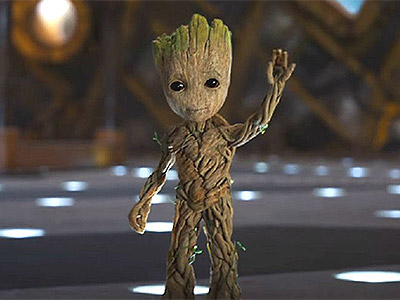 
On the whole, it all still works. While every gag feels routinely set-up in the same way (lots of emotion and a swell of music undermined by a record-scratch moment) the majority of them still land. While Chris Pratt is far more enjoyable to watch when he's channelling Andy Dwyer levels of doofusness, he still manages to sell the emotional stakes at play. While the whole film again relies on Marvel's now-trademark cartoonish levels of CGI mega-action, it is still self-aware enough to know when to deliberately subvert these set-pieces to focus on inane character interaction instead.

And yet there are niggles. Small hypothetical would-have-been-nice-ifs that chip away at the film's otherwise highly-polished pixels. Like the fact that the film starts with a brilliant Baby Groot sequence set to ELO's Mr Blue Sky... and then doesn't ever really deliver anything else as good again. And the major character building moment between Peter Quill and his new-found father in which the pair discuss the lyrics of Brandy, which actually feels like a waste of Chris Pratt and Kurt Russell, who should surely be spending their shared screen-time locked in a mesmerising duel of charismas.

Unfortunately the biggest takeaway here is a slight feeing of vague satisfaction of yet another Marvel job well done. In following a fresh, exciting and original film, this sequel puts all of those learnings into practice again and hits all of the marks, except for the part where it is fresh, exciting and original. It's a perfectly good Guardians Of The Galaxy movie, it's just a shame that this time round we already know what one of those is like.

More:  James Gunn  Marvel  MCU  Guardians Of The Galaxy  Chris Pratt  Zoe Saldana  Dave Bautista
Follow us on Twitter @The_Shiznit for more fun features, film reviews and occasional commentary on what the best type of crisps are.
We are using Patreon to cover our hosting fees. So please consider chucking a few digital pennies our way by clicking on this link. Thanks!