Guardians Of The Galaxy

Just for a second there it looked like Marvel might have let their foothold slip. Edgar Wright's departure had irreparably sullied Ant-Man; Captain America 3's release date clash with DC's Batman V Superman in 2016 seemed like a suicide mission; the suspicion lingered that Thor: The Dark World wasn't actually all that great in retrospect. Momentary blips, all, because Guardians Of The Galaxy is the most confident, daring and balls-out fun Marvel movie of the lot. The last two Marvel releases have been samey sequels, adhering largely to a tried and tested formula, but Guardians Of The Galaxy is one of Marvel's best films simply because it doesn't really feel like it's part of the Marvel universe at all.


Essentially, what we have here is a B-Movie alternate universe Avengers: disparate heroes with varying abilities banding together in unlikely circumstances in order to defeat a common enemy. Joss Whedon needed six movies to get his guys up to speed; James Gunn needs only one. The Troma-taught director of such diversities as splatterhouse sci-fi Slither, bonkers vigilante comedy Super and, um, Movie 43, Gunn brings a patchwork quilt of influences to one of Marvel's more obscure comic-book properties, but he's the perfect fit for a spaced-out superhero adventure that thrives on weirdness.

There is more imagination on show in Guardians Of The Galaxy than the last five Marvel movies combined, and not just in the impressive visuals – although the technicolour palette and creativity shown in the production and set design is really quite stunning. Here scrapes aren't escaped through brute force but by cunning – the prison escape is a perfect example of Gunn's way of thinking. It's so inventive you can imagine kids going epileptic with glee over it, in the same way a certain generation once went apeshit for Star Wars. It's an obvious comparison, but Guardians has one trump card over its more recognisable space opera forbear, in that it is frequently spit-popcorn-in-the-hair-of-the-person-sitting-in-front-of-you hilarious in all the places where Star Wars dragged. Episode VII has a hell of a job to do to keep up. 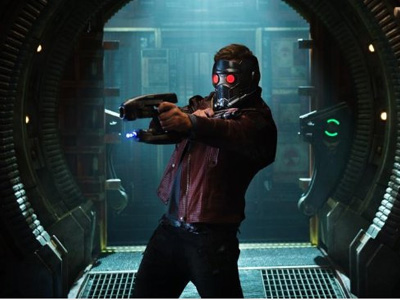 
The key to unlocking the Marvel universe is all in casting. Chris Pratt is just an absolute star as Peter Quill, overpowering the stench of a hundred post-Han Solo space (b)rogues with dumptrucks of goofball charm; Zoe Saldana is ice cold as assassin Gamora, an actual, proper, motivated female character and not just a green pair of tits (a shot of sideboob and Quill's exclamation "She's hot!" from the trailer didn't make the cut); ex-WWE wrestler Dave Bautista is unsurprisingly great at playing a huge, muscled idiot; Bradley Cooper gives Rocket Raccoon just the right amount of 'short guy syndrome' aggression to make him believable and precisely the right amount of sass to make him loveable; Vin Diesel is Groot.

But while most directors would be content with merely casting actors who look or sound like their two-dimensional comic-book counterparts, James Gunn ekes out some genuinely touching and unexpected moments of humility. I know it sounds ridiculous to get serious about a scene in which a talking space raccoon gets drunk, but Rocket's origins are tinged with sadness, making sense of his mask of aggression. It's a similar story with Drax's back-story and Peter Quill's introduction – added depth where you would normally expect snarkiness and quipping. There is plenty of that – and dancing, so much dancing – but you're never in any doubt that the cast, director, animators, everybody, they're all inside-out in love with these characters.

So many moments sing – the slow-mo group walk shot complete with Rocket adjusting his junk; Groot's mile-wide smile after beating the shit out of some space goons; the killer throwaway lines given to the most minor characters ("That was my favourite knife"). Gunn has a habit of pricking pomposity with well-timed gags, the comedic equivalents of record scratches just as the tunes get too familiar: see the 'And my axe!' scene of acceptance, which ends with Rocket being guilt-tripped into taking part ("I'm standing up now. We're all standing up, like a bunch of a jackasses"). This kind of humour – the shamelessly silly, wink-wink nudge-nudge type – is infinitely preferable to the increasingly glib line of comedy found elsewhere in the MCU, where characters are too busy acting like badasses to admit they're making jokes. 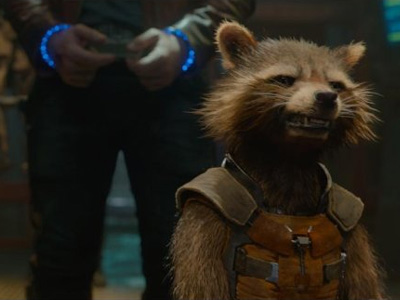 
The movie's music is another great source of humour – a (contextually valid) mix-tape of 80s awesomeness that accentuates the film's unique tone instead of just accompanying it. From the moment man on a mission Star-Lord starts grooving to Red Bone's 'Come And Get Your Love' on his Walkman, you know you're in for something a little different. Any film that wants to use 'Cherry Bomb' by The Runaways in an action montage is A-okay with me.

When it's not dicking about (the film is like 80% dicking about), Guardians Of The Galaxy does have the distinction of having the best villain of Marvel's Phase 2 to date. Lee Pace's Ronan The Accuser might not sound like the toughest guy in the universe ("What shall I call myself. Ronan The Destroyer? Ronan The Obliterator? Wait, I've got it…") but he looks the part, like one of Prometheus' Engineers in Stargate fancy dress, and his Evil Plot – to destroy an entire planet and its people – at least has more motivation than that of your average world-destroying megalomaniac. Pace is so imposing, he actually overshadows Thanos, who looks like a purple cushion in comparison.

Only the relative scarceness of third 'villain' The Collector – aka Benecio Del Toro in his 22nd century Liberace get-up – gives cause for disappointment. His brief, sole scene is a delightfully daffy highlight, so maybe let's cross our fingers for a Marvel 'One-Shot' short film. I'm guessing that some of the vertiginous space chase sequences from midway through the movie are a little easier to follow on IMAX (I saw it in regularvision), but they are fairly disorientating in parts. Otherwise though, the 3D is solid and is certainly beneficial in expanding Gunn's universe.

I would give my right arm for one or two new comic-book properties like Guardians Of The Galaxy every year: you can keep your boy scout Captain America and ho-hum Thor sequels, thank you. Everyone involved here knows that fun is the be all and end all, and Guardians Of The Galaxy is light years ahead of the pack in this regard. Frankly, Star Wars: Episode VII has one hell of a job to do.

More:  Guardians Of The Galaxy  Marvel  James Gunn  Chris Pratt  Zoe Saldana  Bradley Cooper  Vin Diesel  Dave Bautista
Follow us on Twitter @The_Shiznit for more fun features, film reviews and occasional commentary on what the best type of crisps are.
We are using Patreon to cover our hosting fees. So please consider chucking a few digital pennies our way by clicking on this link. Thanks!