Joe Wright must be secretly pissed that Mark Millar's Kick-Ass came along and pooped on his doorstep, because Hanna is a pretty hard sell, post Hit-Girl. Teenage assassin trained as a killing machine since birth? Unless your movie has Nicolas Cage dressed like Batman with a paedo-tache, you're fighting a losing battle from the start.


As usual, I'm being facetious. Truthfully, Hanna and Hit-Girl have little in common other than their gender and their profession - consider this and Kick-Ass at the opposite ends of the same spectrum. Joe Wright's MO is to fill in the gaps between the bouts of ass-kicking, to find out what makes his teen killer tick. You can count his action sequences on one hand; good as they are, in Hanna it feels like they've been somewhat shoehorned into proceedings to make an artful film that little bit more accessible to the Kick-Ass crowd. Like I said, same spectrum, opposite ends.


Saoirse Ronan is excellent as Hanna - the accent never wavers, the puppy-dog eyes are always working overtime, the occasional smile never fails to elicit a response. She's a dynamo in her fight scenes and really manages to convey a degree of physicality (screaming like a banshee helps). Wright doesn't give her much dialogue, but what she has she makes the most of, and in several different languages too. She's a little bleedin' star of the future and no mistake.

Supporting roles are less deserving of kudos - Eric Bana as Hanna's reluctant father is a little thinly-sketched, though as always Bana remains watchable, while Cate Blanchett's government top nob is a bit too pantomime (sharp dresser, bleached teeth, Southern accent) to be anything other than a boo-hiss villain. Her true machinations are hinted at in various not-so subtle ways, but for a movie that seemingly favours personal connections over theatrical grandstanding, it seems a bit 'Scooby Doo' to have her and Hanna face off in final showdown at an unused theme park. 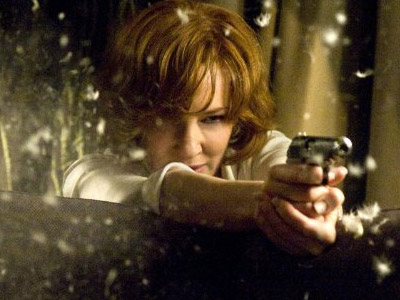 
The special award for misjudging tone, though, goes to Tom Hollander, who plays a bizarre Teutonic hitman with the odd knack of carrying out jobs wearing extremely unsuitable attire (including a zip-up tracksuit, and at one point, tight yellow tennis shorts). When we first meet him, he's presiding over his nightclub's Christmas stage show (acted out by dwarfs, natch) and whistles its theme tune throughout the movie. In time, this sort of ham-fisted scene-stealing will become known as 'Michael Sheening it' - for now, it's just distracting.

The worst thing you could say about Hanna is that it's not really much of anything - it's lacking as an action film, hardly an Oscar-worthy drama and keeps moments of levity to a minimum. That's selling it a bit short, though - it's a bold attempt at humanising what's become a fairly clichéd genre and it has several stand-out moments. An early escape from an underground facility is a genuine pulse-racer, while a touching moment between Hanna and her first ever friend beneath a blanket is delightful: all watery-eyed close-ups, soft lighting and repressed sexuality bubbling beneath the surface. Call off the cops: everyone is of age.

Hanna won't be for everyone and it certainly doesn't plant its flag in the pop culture soil half as firmly as Kick-Ass did this time last year, but recognise it for what it is: a well-put-together, well-acted, occasionally indulgent film that's capable of kicking like a mule yet also surprising with its tenderness. And hey, if you really don't like it, consider it an ace new Chemical Brothers album with a free film attached.

More:  Hanna  Joe Wright  Saoirse Ronan  Cate Blanchett  Eric Bana  Tom Hollander
Follow us on Twitter @The_Shiznit for more fun features, film reviews and occasional commentary on what the best type of crisps are.
We are using Patreon to cover our hosting fees. So please consider chucking a few digital pennies our way by clicking on this link. Thanks!