Clearly, no one told Norwegian writer/director Tommy Wirkola that the set-up was ripe for humour; you'd think the creator of Nazi zombie movie Dead Snow would know a little something about high concept horror comedies. One can only assume something was lost in translation, because right from the get-go, the solemn-faced duo go about their business – witch-hunting, remember – with all the zeal of overworked pest controllers. Renner and Arterton don't possess enough charisma to punch up a script that feels like first draft stuff. To be fair, there's not an actor on Earth who could make dialogue this drab sound witty. 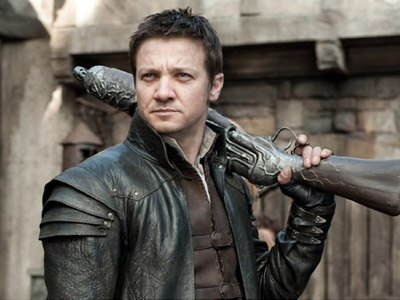 
There is potential in its DNA for sure. The movie's best gag – an unspoken one, and you hope not an unintentional one – is that Hansel and Gretel now look like Jeremy Renner and Gemma Arterton, complete with unexplained Hollywood tans, accents and teeth. That's a seed of satire in itself – the Westernisation and bastardisation of ancient folk fairytales – but it goes entirely unrealised over the film's 88 minute running time. Instead, we're treated to repetitive witch hunts, all seemingly shot in the same locations, with the same weapons and special effects. The excellent make-up and costume work is wasted because the fight scenes are so choppy, the editing so sloppy and the 3D so dark and murky. What you can see feels like it was shot in 2.1 dimensions and not three.

The cast are adrift. Jeremy Renner looks desperately lost, as if the witch he'd most like to hunt is his agent. Gemma Arterton grits her teeth gamely but her heart's not in it. Famke Janssen as the head witch gives a little gusto, but compared to Charlize Theron's box-of-frogs Evil Queen in Snow White And The Huntsman, she's like a bad panto villain. Hansel and Gretel are even joined on their quest by a smart-talking teenage boy and a large prosthetic troll called ED-WARD, compounding their mortal embarrassment. No one comes out of this smelling of roses. Everyone's paycheque is streaked with skidmarks. 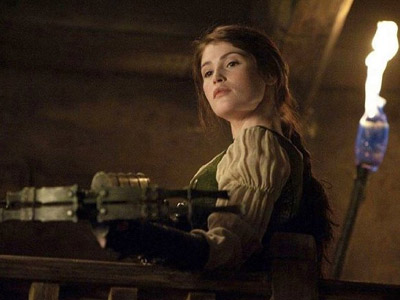 
It is tempting to fall in on a movie as hapless as Hansel & Gretel and give it a good kicking, because honestly, it's a mess: painful to watch, unpleasant to listen to and overlong, even at under an hour and a half. It's not completely bereft of ideas – Hansel suffering from diabetes is a nice, if pointless, addition – but the execution is so poor, you're left unsure if anyone involved knew what tone they were aiming for. Fantasy comedy? Guillermo del Toro-style horror? Parody? Anyone?

Your Highness might have been crude and self-satisfied, but at least it committed to being both a fantasy and a comedy. If Hansel & Gretel: Witch Hunters had a little more faith in its own ridiculousness, maybe it could have matched that film for comedic bite – as it is, it feels half-cocked, like a joke without a punchline. Ironic really, as despite its lack of humour, Hansel & Gretel: Witch Hunters is a film that's destined to be remembered as a laughing stock.

More:  Hansel Gretel Witch Hunters  Jeremy Renner  Gemma Arterton  Famke Janssen  Tommy Wirkola
Follow us on Twitter @The_Shiznit for more fun features, film reviews and occasional commentary on what the best type of crisps are.
We are using Patreon to cover our hosting fees. So please consider chucking a few digital pennies our way by clicking on this link. Thanks!