And so it all ends. Goodbye, Gryffindor. So long, Slytherin. Adios ‘Ogwarts. Whatever your feelings about ‘The Boy Who Lived’ and his mostly family friendly foray into a world of wizardry, there’s no denying that this final film marks the end of an inspired (and lucrative) era in British filmmaking. So thank god that it so magnificently lives up to the occasion.

Your interest in this film will obviously be determined by your tolerance of the books, movies and surrounding hype thus far. So, in the interest of full disclosure, my approach was this: I’ve read all the books and seen all the films. I'm not a massive fan and I don’t dress up in little round glasses or wear a red-and-gold scarf, but I think that, if you can get past the childishness of the early books (and the hideous kid acting in the early films), the pay-off in the later instalments makes it all worthwhile. If you allow yourself to become invested in Harry Potter’s overall story arc (and not just the flying cars and Quidditch matches), you’re in for an epic – and very much adult – final chapter. To put it bluntly, this last film is a bit of a bloodbath.

As expected, Part 2 picks up from exactly where Part 1 ended, which means that Harry, Hermione and Ron spend a brief amount of time mourning the death of their friend before getting down to the business of finding the rest of the Horcruxes (containing parts of Voldemort’s soul) so they can destroy them and defeat He-Who-Must-Not-Be-Named once and for all. At the same time, the Dark Lord catches wind of Harry and co’s plan and this ultimately leads to an epic showdown between all the good wizards and the evil Death-Eaters, as well as between Harry and Voldemort, all carried out on Hogwarts grounds. 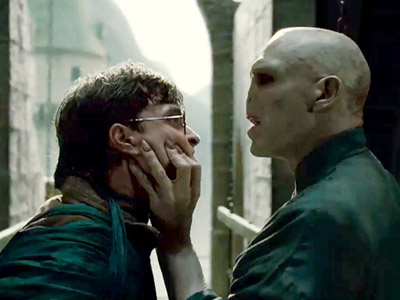 
At 2 hours and 10 minutes, this is the shortest of all of the Harry Potter films and, in many ways, it feels like just the climactic third act of Part 1, as opposed to a story in its own right. However, there is a lot crammed into this running time, and between Horcrux-hunting, character revelations, several stand-offs, giant battle sequences and a short consideration of existentialism (yes, that’s in there too), it’s hard to argue that both parts could have been released as one whole film and do the story justice.

Also, while this possibly the shortest 130 minutes that you’ll ever experience, with all the main characters whizzing about in a race against time, the script thankfully puts plot and characterisation above all else. For all the action and special FX on display, this is very much a story-driven film, constantly reminding us of what’s at stake and paying respect to the 10 years that fans have invested in these characters. At the same time, there’s still room for the same kind of wonderfully imaginative set-pieces seen in the previous films – there’s goblin vaults, fighting giants, magic fire threats and one particularly brilliant scene involving a huge dragon inadvertently saving the day.

Where the script falls short, however, is in its strict adherence to Harry’s story alone. While the film does well in tackling the unenviable task of wrapping up the important book subplots left out of the previous instalments (almost every character gets their own moment to shine, although not often in the way that many fans will be expecting), a lot of crucial moments for the supporting characters are swept aside in favour of focusing on the Boy Wizard. In particular, those like me with a bloodlust for seeing the shocking deaths of some of the more important peripheral characters will be disappointed by the way that these are undeservingly glossed over. 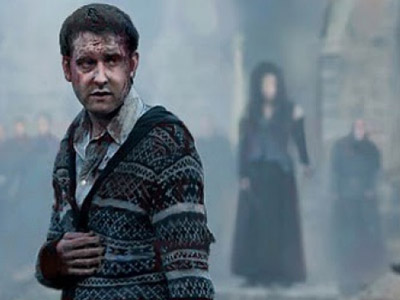 Neville finds out that cardigans don’t offer much protection from physical harm.


Regardless, the movie still manages to be a worthy ending to what has become one of the greatest film franchises ever released. And it’s thanks to JK Rowling that this last episode feels so final because it’s her original writing that reintroduces (and sometimes destroys) locations and themes from each of the previous adventures, including the Chamber of Secrets and the Room for Requirement, to add to the sense that the whole story is coming to an end.

In this Hollywood era of sacrilegious remakes, needless reboots, and money-grabbing sequels, I can’t remember the last time I felt like I was watching a ‘conclusion’ to something so instilled in popular culture. And this sense of finality, in itself, is enough to create an air of poignancy to an otherwise thrilling and truly epic goodbye to the series. Au revoir ‘Arry.

More:  Harry Potter Daniel Radcliffe
Follow us on Twitter @The_Shiznit for more fun features, film reviews and occasional commentary on what the best type of crisps are.
We are using Patreon to cover our hosting fees. So please consider chucking a few digital pennies our way by clicking on this link. Thanks!