Helix's first season, out on DVD and Blu-ray on Monday, suffered for Channel 5's capricious scheduling, but has a lot to enjoy. A lot more than most things on Channel 5, anyway.


There's a bit early on in The Hitchhiker's Guide To The Galaxy where Arthur Dent recollects how, when informed the local council wished to demolish his house to make way for a new bypass, he went to the council's offices to have a look at the plans in question. Upon arriving he found that the plans were indeed on display, in the bottom of a locked filing cabinet, which was located in a disused toilet in a dark cellar with no stairs. A toilet which happened to have a sign on the door saying "Beware of the leopard".

After a month or so they got bored and unceremoniously shoved it to a late-night slot for a few weeks before quietly dropping it. They then shelved it for a few months before quietly sticking the remaining episodes on 5* (an actual TV station: I checked) without troubling to tell anybody it was back. Consequently it was watched by approximately seven people.

They've got form in stuff like this, dropping no-hoper US shows like Breaking Bad and The Walking Dead in favour of quality entertainment like Big Brother and insightful documentaries about people who get sexually aroused by watching videos of Nigel Farage. (Actually guys, can I pitch that one next time you go down the pub? Just so long as I don't have to watch it.) 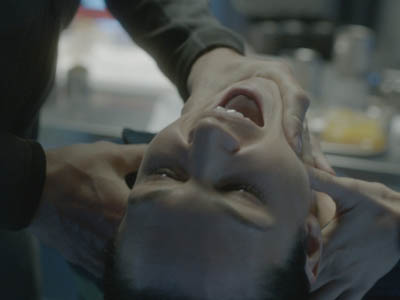 
And it's a shame, because Helix isn't actually that bad. It's by no means in the same league as some of the other shows they've given this treatment, but you could do a lot worse than give it a go (watching anything else on Channel 5 for a start).

The show follows a group of scientists from the Center For Disease Control And Prevention (CDC) who are sent to an Arctic medical research station following an outbreak of a particularly unpleasant virus which seems to be either killing people on the station or turning them into zombie-like creatures. Needless to say, once they arrive things aren't anywhere near that simple (because obviously pissed-off zombie-type things are simple).

The team on the station are researching and developing nasty viruses of their own; the scientist in charge of the base is obviously hiding something, as are assorted members of the CDC team. As things escalate the plot gets more and more bizarre. There's twists galore, with mercenaries, assassins, frozen monkeys and a plot that gets so insane you can only assume they're making it up as they go along.

The series has quite a clever conceit. Each of the 13 episodes comprises a separate day, with each forthcoming season taking place in a different location with a largely different cast as the labyrinthine story unfolds.

And yes, the plot, which veers from medical drama to thriller, horror and sci-fi, is impressively complex, although occasionally more than a little convoluted. Plot twists come thick and fast and the show manages to stay one step ahead of the audience by, frankly, being completely bonkers. What starts as a reasonably grounded medical thriller (OK, with zombies) gets more and more bizarre as the motivations of the base's lead scientist (Hiroyuki Sanada) and his employers, the shady Ilaria Corporation, are slowly revealed. 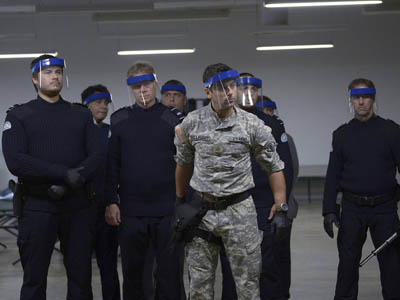 There's always one: no, it's not mufti day, you goon.


Besides borrowing its Arctic setting from The Thing, and the zombies (except they're called Vectors, so obviously not zombies in any way, shape or form) from Day Of The Dead, the major influence here seems to be The X-Files. Albeit an episode that lasts 10 hours with sexual chemistry between the leads about as steamy as an episode of The One Show. However, there's shady characters and organisations aplenty, lots of black goo, and a lead actor (The Killing's Billy Campbell) who seemingly only got the part because Robert Patrick was busy.

Whilst the plot is impressively complex the same can't, unfortunately, be said for the characters. Campbell and Sanada aside, they're fairly thinly sketched, the involved plot not really giving them sufficient time to develop before they're shockingly killed off/switch sides/have some dark secret that we're supposed to be shocked by but aren't because we don't care about them.

Still, there's a lot to enjoy here, in particular a lively mid-season cameo from Star Trek: Voyager's Jeri Ryan. And the story's resolution sets things up nicely for the already-confirmed season two.

Helix is exec-produced by Ron Moore, the man who gave us the rather brilliant Battlestar Galactica reboot. This is by no means in the same league, but it's diverting enough. It's not going to win any awards (unless they give out one for "Best The Thing/X-Files/Day Of The Dead/Casualty hybrid") but it's a fun, if occasionally baffling, show with a lot of potential. Or, if you fancy something that requires a little less concentration, you can always go and see whatever shit Channel 5 are showing this evening.