No one makes engaging drama about the people who built the first British railways, do they? No, we just get documentaries about it on BBC4 presented by men in cardigans. Did the British railway pioneers spend half their time shooting folk, throwing back sippin' whisky and frequenting mobile brothels? Probably not, and anyway, no one wants to see them do it.


There's a semi-serious point here. American history is pretty sexy, and its TV knows it. The odd movie about the Civil War or the first black guy who was allowed to play golf is all well and good for a quick bit of time-travel, but if you want to steep an audience in a time and place, and maybe even teach them something about it, the telly's the place for it. Hands up who knows far more about Prohibition through Boardwalk Empire than they ever knew before.

Hell on Wheels, now into its fourth season in the States and with its third out here on DVD, mines this fact for all it's worth. What could've been a dry exploration of how a load of track was laid is instead a well-mounted character drama using the Great Plains as its backdrop to impressive effect. 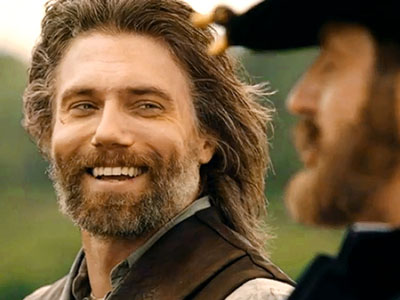 
Our guy is Cullen Bohannon, played by Anson Mount, best known as the bloke out of the Britney Spears movie Cross Roads. (Which also featured Pennsatucky from Orange is the New Black, I discovered while procrastinating.) While the first two seasons dealt with his getting revenge on the Union soldiers who killed his family during the Civil War, now he's setting about making himself Chief Engineer of Union Pacific Railroad. Why? Because the dude just loves to lay him some track, that's why.

Building a railroad is trickier than you'd think. Someone's always got their house in the way and refuses to move, or a prostitute's baby is kidnapped and needs rescuing. Wealthy investor Thomas Durant (Colm Meaney) isnt Cullen's biggest fan and keeps trying to bring him down. Cullen also shoots a horse because it looked at him funny. 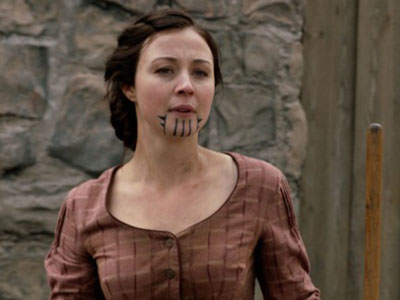 Got something on your face.


There is a sense of chaos about it. By definition the location doesn't stand still, but Cullen is an effective enough focal point because of his singular purpose, allowing a lot to go on around him while we're anchored to his simple compulsion to get the dang thang built. So he and his head of security Elam Ferguson (Common) can head off to an Indian reservation and end up playing a violent version of lacrosse for their lives, then back to Hell on Wheels to find the main story still going on. Or we can visit the Swede, a weird loner whose family is dead, becoming obsessed with a Mormon family who take him in. (This in particular is a brilliant subplot, operating entirely outside the main storyline.)

As historical document what it really conveys is the conflict between the North and South in the years after the Civil War; you can see its parallels to this day. Journalist Louise Ellison from the New York Tribune is a constant presence, threatening Cullen's livelihood by reporting what goes on in Hell on Wheels, which tends to be a lot of drinkin', whorin' and murderin' when they're not buildin'. The idea is made plain through Cullen's responses to her questions: she's a city type from the North, and neither she nor her readers understand what it takes to get things done in the South: a little backsliding here and there, but a strong work ethic and an underlying decency. As decent as you can be having just shot a horse, anyway.

More:  Hell On Wheels  Anson Mount  Colm Meaney  Phil Burke  Robin McLeavy  Common  AMC  ITV  TCM
Follow us on Twitter @The_Shiznit for more fun features, film reviews and occasional commentary on what the best type of crisps are.
We are using Patreon to cover our hosting fees. So please consider chucking a few digital pennies our way by clicking on this link. Thanks!